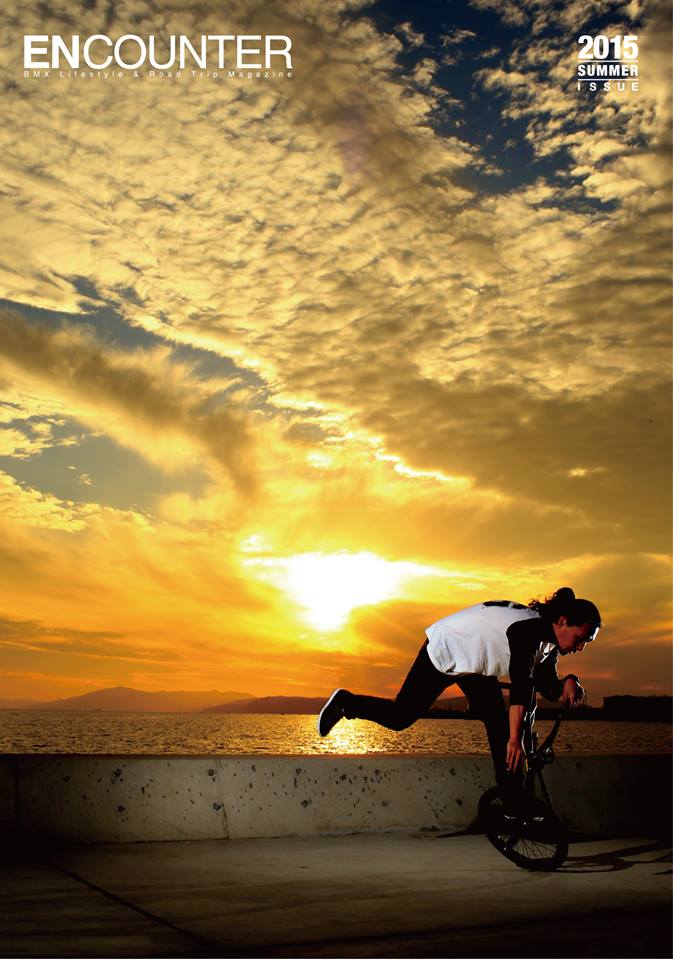 Sadly print seems to be a thing of the past here in the UK, it is great to see it is still going strong elsewhere in the world especially in Japan! And indeed, York Uno getting the cover is pretty awesome and still a big deal! I’ve been lucky enough to get ahold of some issues of Encounter, they are a great read! Check the contents of this issue:

Hiroya morizaki and UNO. Two people have built a BMX flatland scene of Japan’s current prosperity talks about each other as rivals.
Perugia-Bhinde the scene
Perugia Cup was not made? To introduce the other side.
-High trees WNG interview
High trees used as Japan’s top rider in the Park. Close to challenging the thick walls of the foreign State of mind
-Voice – Digit Manager mawatari, Yasutaka interview
Before the Internet era, was acting as the BMX community newspaper Dig-it
zine. What began over whether? Engagement to the scene as means the papar and shop Dig-it, Manager of skipped it to spoke.
●Aaron Nardiインタビュー
Dawn Props crew members join creating images and interviews as a young, active Street/Park, as a source of standards for professional riders. Asked the secret to successful Aaron is now active as a photographer/art director/designer, from the story of Props, BMX pro rider and then turned professional in the field of non-it.
-Shanghai trip
Top Street rider Asano sea 1, Shanghai has traveled. Up the Shanghai scene and riders.
●Go anywhere, stop anywhere
Where to bike park. Consider the locations Park the bike Takei Cycle Cloak, bicycle service, bicycle-related events.
About-career Messenger
Rascal wrote Mexico CMWC in the preceding that essay about the Messenger spell Yuji Nakamura, career
●カミロ・グッチレス World Trip
Germany, Autmn riders with Pro flatland rider from Peru, Camilo. Talk about the world seen through the flatland, but he has traveled all over the world
●igi bandwagon tour
Takuji Kasahara Vol7 also wrote a pro flatland rider. For the countries of South America from South America is currently South America focusing on continued to travel, still many unknown aspects of the scene or BMX talk.
-Gil t. 長迫 interview
As BMX racing young man now most close to the Olympics, 長迫. Talk about the difference between struggle and relocated to Switzerland and aims at world now feelings take sponsorship reasons started the race, and world-leading.
● jyunpei goto interview
Jyunpei goto responsive balance, is Bali’s riding and was active in the KOG progress three years from 2009 to 2011. He went to Australia and is now doing the frame building. Side stage scenes supporting his footsteps and desire are traced.

2 thoughts on “York Uno gets cover of Encounter Vol.8”