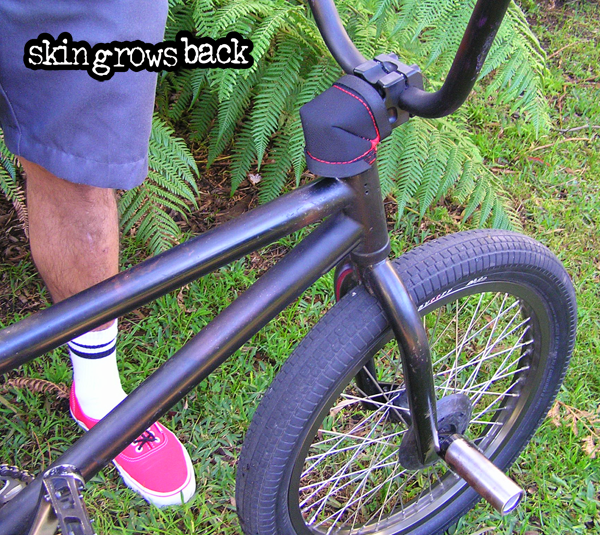 At the end of last year I was at a friends house. He’s a rider too, but he was also a bike courier for many years in the UK and here in Australia. He’s also a manufacturer and designer of many things for couriers and cyclists alike (skingrowsback). Anyway, at the end of last year, on one of his many bikes, I noticed a stempad. After looking at bikes on forums for years with everything from sweatbands to bandanas wrapped around the stems, I was totally overjoyed to see something decently padded and designed for the purpose of protecting sensitive knees from the almighty wrath of stems.

Jamie didn’t really share my degree of enthusiam for the product at the time (anyone who knows me will tell you that I do get fairly excited upon occasion). I think to him it was something simple and obvious that just seemed to work for him. Maybe he hits his knees on his stem less me, I don’t know. Maybe he didn’t realise that even Martti hits his knees on his stem. It’s a problem common to us all. Anyway, he took the stempad off of his bike at that the moment and just gave it to me. That’s the kind of guy he is. It was an instant solution to my problems. We went out for a ride and all of the plasticman stuff that I was doing at that time felt really comfortable even though I had tender spots on my knee from previous sessions. Problem solved I thought. Little did I know that that was just the beginning.

Jamie is very idealistic and only wants to design and produce the most functional and hard-wearing product that he possibly can. He makes all his products on his own here in Australia, and he spends nearly every waking hour making and thinking about them. Months have passed and the stempad is in it’s 3rd generation for me. I say ‘for me’ because I’m sure that for Jamie it’s in it’s 12th or 20th or something crazy like that. I know he’s tried many new ways to make it smaller and more compact and at the same time include more reinforcement and binding in the process to make it stiffer and stronger. He’s a perfectionist so he I think only shows me certain things. 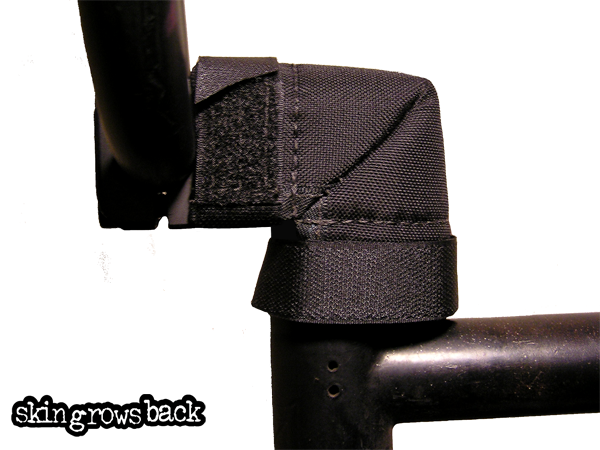 The G1 stempad, the one that came from Jamie’s bike, was basically cordura layered over foam plus Velcro tabs to hold it in place. It was good for a time but the corners of the stem gradually cut into the foam slightly. The G2 stempad incorporated a third inner layer that eliminated this problem, as well as more stitching and binding which gave the pad a more solid shape – making it more protective and more hardwearing. I was stoked, but the pad was bigger than the G1. Perfect for me, as I run 2cm of spacers and a 53mm stem. None of the super-flatland-specific bikes on the forums with the bandanas choked around them would have shared my enthusiasm though. The product needed to be slimmed down in order to fit 26-35mm stems. So that’s where G3 came in. Same basic design as G2 but on a diet; slimmed down velcro, shorter overall, but with the same amount of stiffness and padding in all the same places as G2.

The red and white one on my bike at the moment, I guess you could call G2.1. It’s as small as G2 could go at the time and was unforutunately too big for a friends 3pc 6-bolt Quamen stem. G3 is done in my opinion so now I’m thinking about getting G2 slightly more refined because bigger stems work better for me (and Matthias!). There will probably be the options of ‘stempad’ (48-57mm stems) and ‘stempad mini’ (26mm and upwards). The stempad mini could fit any stem, covering the most offensive parts around the back and sides, but it’s nice to have a pad the covers the stem all the way up to the bars. Of course it’s more protective, but it also looks cool and opens up the whole knee on the stem trick realm a lot more.

It’s been really cool to be a small part of this development process so far and getting the product ready for the flatland market. I’m very passionate about it’s application in BMX and also about the fact that it’s handmade here in Australia by a fellow rider who simply cares about solving problems. I’d like to say that the product is finished but I know that every single time Jamie makes one it’s a new generation for him and he will always try to make it better in some subtle way that maybe only he can notice. He’s selling them now and he offers an ever-changing array of custom colour options at no extra cost. Check his site: http://www.skingrowsback.com or email me if you’d like to know more about the stempad: flatpaul@hotmail.com.

It would be really cool to see more people using the stempad and giving us constructive feedback. I hope good things come of it.