Fifteen over the limit, sailing though the Mojave. Last time I crossed this desert, I had a blowout and ended up having to drive over five hundred miles on an emergency donut. But this time my buddy James is driving, and we’re blasting our way to the water on the other side. We’re on our way to our first One Love Jam.

My buddies and I awoke the next morning in Newport Beach, CA, to find a ride spot better than anything our land-locked minds could have dreamed of. Walking onto the unbroken blacktop an hour before the jam officially started (you could say we were eager), we were greeted by the pristine liquid backdrop to our upcoming day. Separated from the Pacific Ocean by only a few dozen yards of sandy beach, the massive jam area spread itself out in a smooth and consistent canvas of unbroken blacktop. (“This spot is as close as you can get to the beach without getting your bike wet.”) Unbroken and uninterrupted, its surface pushed away from the ocean for a hundred and fifty feet. Its length extended parallel to the beach for another three hundred and fifty feet. The January sun started to warm our faces, and we quickly realized that long pants were an unnecessary mistake. And yet, away from the desert and soothed by an ocean breeze, it’s heat would never become oppressive. Was this for real? 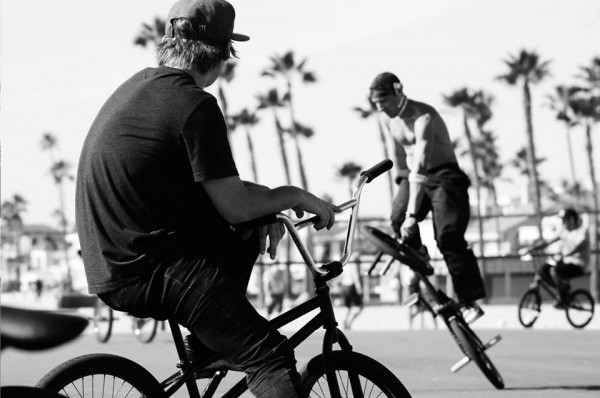 Pete Brandt throws down a blender as Adam Kun looks on..

Over the next couple of hours, the fourth incarnation of the One Love Jam grew quickly from a small handful of early-birds into a massive swirling energy of stoked riders sharing one blacktop for the meet-up of the year. Riders flocked in from all over the States. Several made the trip from Canada, Finland and Hungary. When Darin Wright called out for group picture time, about 70 riders struck a pose, making this year’s attendance the largest of any One Love Jam to date! 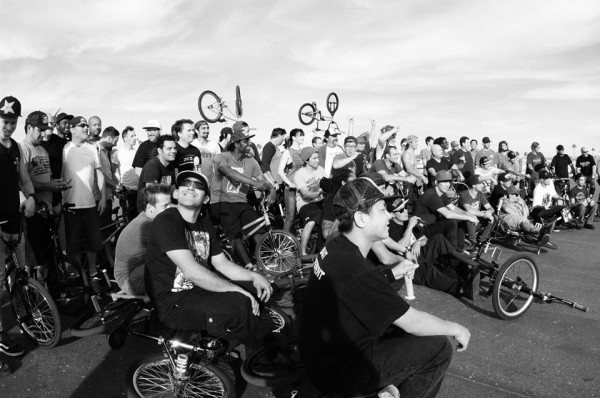 Taking breaks between warming up and stretching, I started to remember just how uncertain I can get around other flatlanders as their numbers began to grow. Gawking pedestrians never make me self-conscious – they don’t have a clue what they’re looking at. But other riders know what’s going on, they know what to expect, and they know how to judge what they see. I’ve only been to one other jam outside of Arizona, which brought together about a dozen riders from the Midwest. Despite their unbroken support and kindness, I had been too nervous to try much of anything that was unorthodox or experimental. Suddenly my mind rocketed back to Newport, and I looked up to realize that flatlanders were showing up faster than introductions could be made. How would my riding be received? 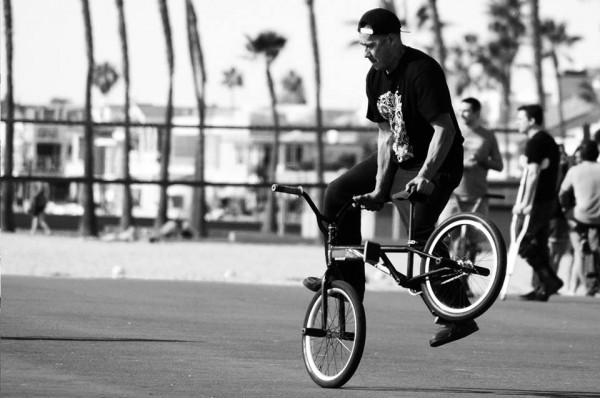 I soon realized, however, that the numbers were far outweighed by the personalities. As attendance climbed into the triple digits, the jam continued – if not accentuated – the welcoming vibe it began with. The benefits of its non-competitive format were quickly demonstrated by the diversity of skill levels, styles and backgrounds that it supported. Strolling through the crowd, I saw newbies on pieced-together spares learning the basics, next to retirees trying to remember those tricks they used to do “back in the day”, next to sponsored stars throwing down fresh links, next to legends of the oldschool reminding us where our roots lay. The openness of the One Love Jam supported the active presence of this diversity, and each new person helped to make this event what it was: absolutely fantastic. 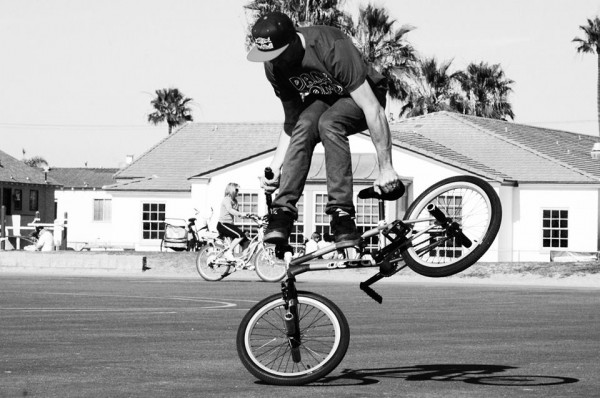 Terry and Scott O’Brien made the trip out from New Orleans. Here Terry mid 3 flip to halfpacker!

For most event reports, I think it would be appropriate to highlight some of the more remarkable moves thrown down. For this jam, however, I will break that convention. I have three reasons for doing so: First, so many amazing moves and links were attempted throughout the One Love Jam, and so many of them were executed with flawless style. Suffice to say, the level of riding was so insane I wouldn’t even know where to start. Secondly, I’m not even going to pretend like I know what all those moves’ names are. Finally (and by far most importantly) I think that reciting a credit roll would miss the point of what made the One Love Jam an incredible event: The valuable thing about the One Love Jam was that there were a bunch of different riders having fun, doing their thing, all on one spot, together. People were having their minds blown – be it because they pulled a semi-decent rocket manual or because they saw someone link a cross-footed wobble-duck into a boneless handscuff (or, you know, whatever). Cultivating and sharing this state of being stoked – for me the highest ideal of what being a rider should always be – was what the One Love Jam so remarkably accomplished. 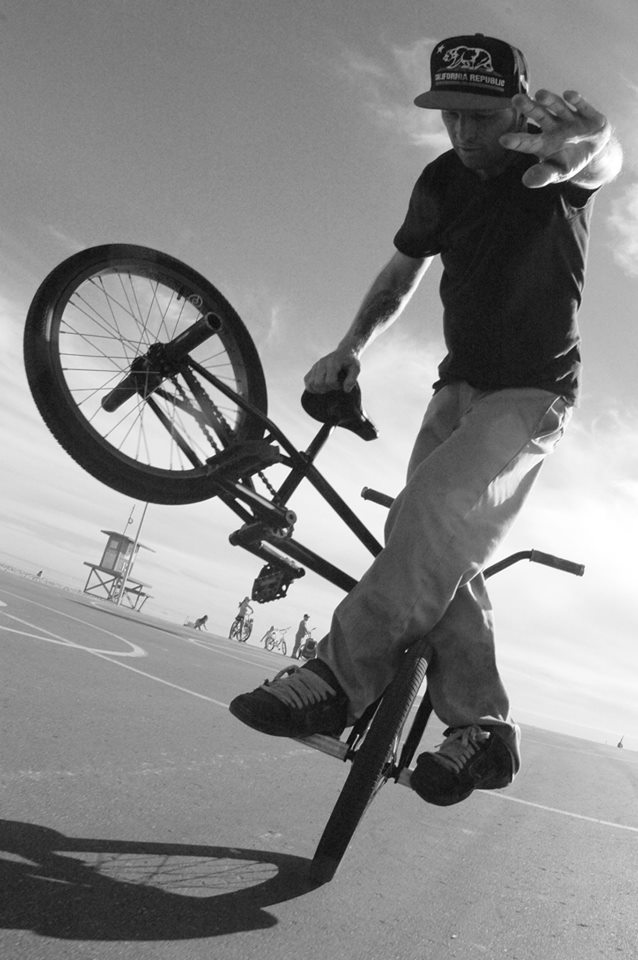 Being this is Dylan Worsley, I am going to guess this xft halfpacker is backwards! Timeless style from one of the best flatlanders of all time!

With this in mind, I would like to give some highlights from the event, in no particular order. For starters, we have Gabriel T., who traveled alone from Florida. He came to the jam without knowing a single flatlander there (nor in his hometown of Miami, for that matter). His kindness shone through in both his smile and his smooth, self-taught riding style. Another highlight was meeting Lalo Jimenez, who took the time to make introductions for those who were so recently strangers to even himself. Off to the side of a thriving jam circle, he shared some original concepts he’s been feeling out lately which could potentially shift the paradigm of riding style. His curiosity and willingness to share his imagination is infectious. Yet another highlight was seeing Sean Fontenot’s burning commitment and his willingness to make mistakes along the way. I think I saw him crash more than everyone else combined at the jam – and I mean that as the highest compliment of his dedication and confidence at trying something he knows he may not pull, not even the twentieth time. I think it is also an amazing gift that he was giving to the rest of the riders, to show them that even the most skillful of riders have to learn the hard way and that we don’t always have to show off our dialed tricks every time. I can personally attest that it was this willingness to show the flaws that encouraged me to try the moves I’m currently loving to learn. More than any single trick or link, it was these attitudes – not exclusive to, but for me epitomized by Gabriel, Lalo and Sean – which were the highlights of the weekend and helped to make this year’s One Love Jam truly exceptional. 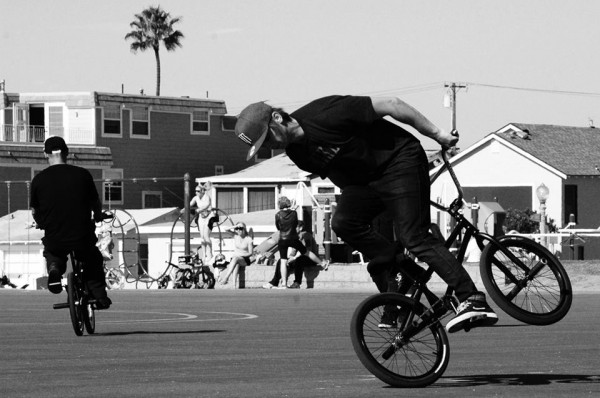 I now look back at this past weekend and wonder how everything could have ever gone so well. In the course of twenty-four hours, I met more flatlanders than I cumulatively know from the rest of my life. I met even another rider from Arizona, who had been completely disconnected from our state’s budding flatland jam scene. No longer. I am looking forward to more One Love Jams, and am freshly motivated to help build the flat scene here in my home state as well. Many thanks to everyone who made this event possible: the fellow riders, the tag-along friends, and most especially the incredible organizers who hatched One Love from their imaginations.