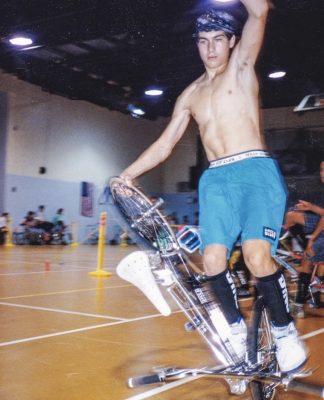 Yesterday the sad news, New England flatland legend Josh Marsele aged 48 has passed away broke online. Josh’s name and riding talent first came to my attention in my ‘zine swapping days in the late 80’s early 90’s, and particularly Kieran Chapman’s Radazine and Wire creations that did a fantastic job of documenting the N.E progressive flatland and ramp riding scene.

Josh was also one of those riders that broke out of the thriving New England flatland scene, and competed all over the states in the AFA Masters series, and even became year end champion in his class in 1989. (Those classes were stayed back then, that is not an easy achievement!).
I will dig out some contest footage below as well as some photos, as we pay tribute to this amazing rider. Thank you for all the inspiration you personally gave me through the late 80’s and 90’s.

Rest in peace, Josh Marsele.
Condolences to all of Josh’s family, friends, and the New England flatland scene. 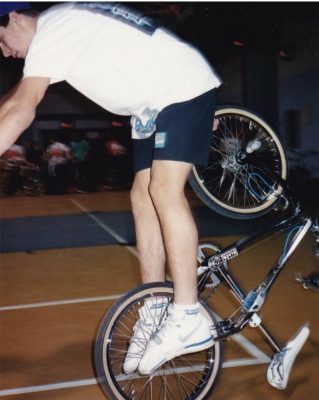 Scott Denoncourt kindly sent in this tribute that I will share with you all….

“Joshua P. Marsele, 48, of Bristol, died on Tuesday (January 19, 2021) ending his battle with an ailment that caused him intense chronic pain and severely limited his mobility. Josh was born in Bristol on February 14, 1972 and was a son of Joan (Beger) Barney of Bristol and the late James F. Marsele.

A lifelong Bristol resident, he graduated from Bristol Central High School Class of 1990. He worked as a graphic computer artist, a medical assistant for kids and the elderly, and for 14 years as a high-voltage lineman for Eversource.

He was a loving son, brother, and doting father to his cats Applejack and Buster. His loved ones will remember him as a charismatic, creative, passionate, funny, mischievous, vibrant, generous, and accomplished individual with a singular sense of style, a soft spot for animals, and a penchant for kayaking. His true passion was BMX flatland freestyle riding (search YouTube: Axlepeg BMX) and he was the 1989 American Freestyle Association Masters Champion.

In addition to his mother, Josh is survived by two sisters: Julie Marsele-Cusson of Naples, FL, and Hayley Varhol of Philadelphia, PA; a niece, Chloe Cusson; a nephew, Kyle Cusson; his stepfather, Stephen R. Varhol, as well as many aunts, uncles and cousins.

A walk-through visitation will be held at Funk Funeral Home, 35 Bellevue Ave., Bristol, on Saturday, February 6, 2021, between 1 and 3 PM. In lieu of flowers, memorial donations may be made to the Friends of Bristol Parks and Recreation Fund.

During my ‘zine making days following the New England scene via Radazine was a treat! Check this no touch from Brian Hobson from the King of Flatland contest, April 1990, smooth as glass style! Thanks to Drew Henderson, sending this weeks OSS in!