It’s been almost a year since our trip ended and we are quite excited to share the video and story which will finally be out tomorrow. A lot has happened during our trip, but only a few things were recorded. Here’s a few interesting facts that you might not see in the video you guys would like to hear about. 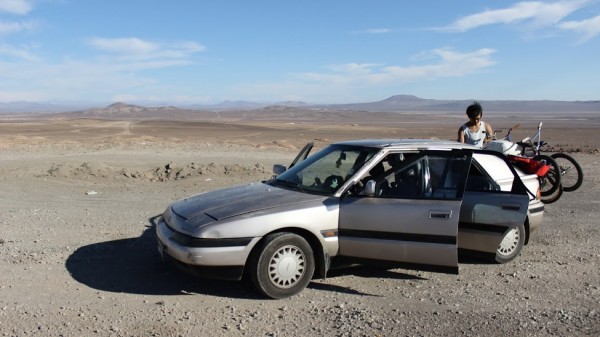 Some of you may already know, our trip started as an idea we had in James McGraw’s living room at 2014 Battle in the Rockies. Quite a few people showed interest in taking part in it, but a month or so later, only Dub , Taku and I were at the car dealer in Santiago, Chile buying a beat up 1998 Volkswagen station bandwagon which was actually in pretty bad condition, it could barely brake or go up a hill.
None of us ever had any particular love for cars, so you can imagine how three newbies went and bought an overpriced shitbox for too much money , making us over our budget too much money as we started the trip.
At that point we realised we’d been passed a lemon, and went and got our car checked out by a friend of a friend and ended up being passed a second lemon. Our car suffered it’s last kilometre on the first day of our trip…that pretty much sucked the hope out of us. 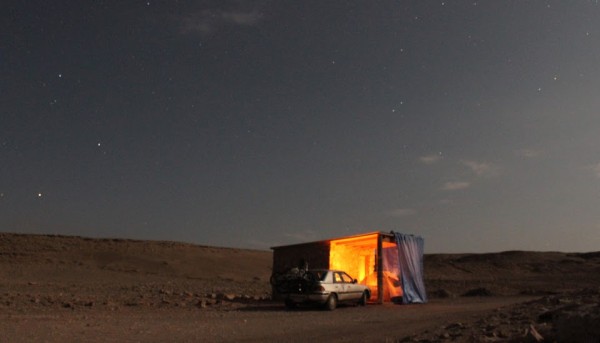 The place we called home for 3 nights in the northern Atacama Desert, Chile.

In the northern part of Chile, we drove at night through an old mining ghost town where they used to have their own factory currencies for their employees and they weren’t aloud to leave the village. Definitely the creepiest moment of the trip. 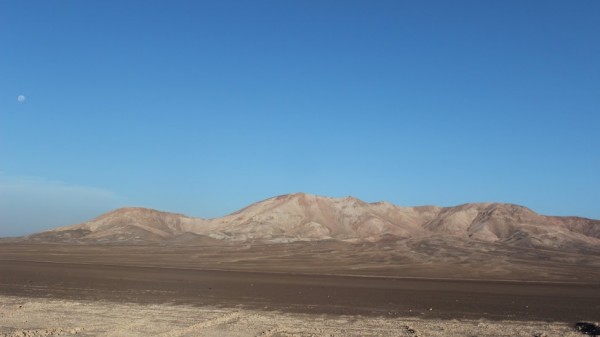 Full moon in the day, Chile.

In San Pedro de Atacama’s Valley of the Moon desert, we came across an old French man walking next to his bike, he was dehydrated and had only a bit of warm water left at the bottom of his water bottle as he dragged his feet 8 km’s away from the closest village, he was on the verge of collapsing and we saved him with cold fruit juice and a peach. Only Dub could understand him, from what he understood, the man had been biking all day and got confused underestimating the bike ride he started early in the morning that day. The man with his straw hat and a deep southern French accent was straight out of a movie! 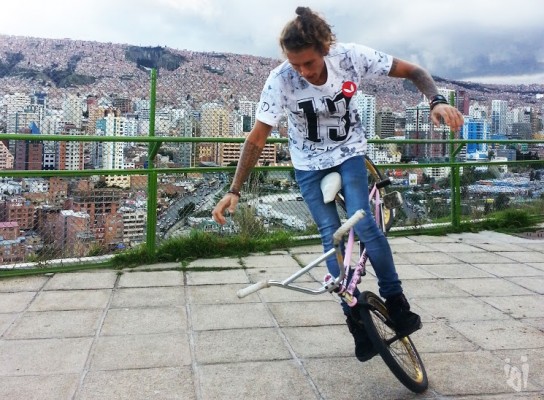 We got locked up between the Bolivian and Chilean border at more than 3700m altitude, night time was about freezing point, we covered our tent with a tarp and we had to stay clothed and slept close all night…it was quite a change as we had just left the Chilean desert the day before. Let’s say we would never recommend ANYONE to cook with a gas stove inside a tent…we spilt spaghetti and boiling water all over our tent, mattress and sleeping bags, almost burning through the bottom of the tent… 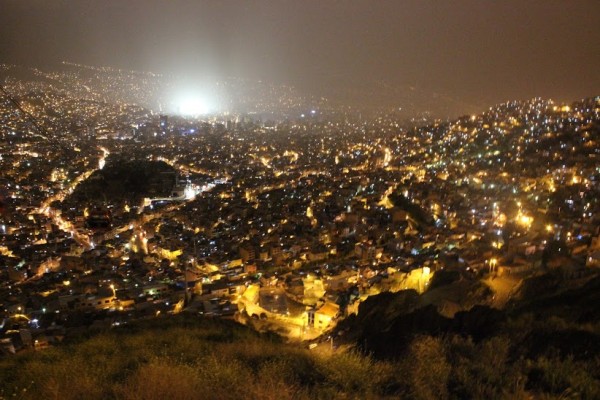 La Paz, how it looked like when we arrived late evening.

One of the most suspenseful moments of the trip was descending into La Paz, after driving all day and arriving late night, beat up from the road, we went down this steep hill in the middle of a not so wealthy neighbourhood and we realised the only way out was going up another steep hill. Our car didn’t like steep hills, and our driving skills weren’t on par with local techniques for going up hills at low oxygen levels with old cars, plus we’d only been driving stick for a few weeks. We tried going up the hill and tried and tried again…believe me when I say it felt like we were in Blade Runner, people peeping through barred windows, flocks of dogs barking and strangers looking at us like we didn’t belong there. We had no choice but to give the wheel to a total stranger that would eventually drive the car up hill first try, but with none of us in there with him since the car was too heavy…he could have drove away with all of our things, thank god…everything could have ended right there! 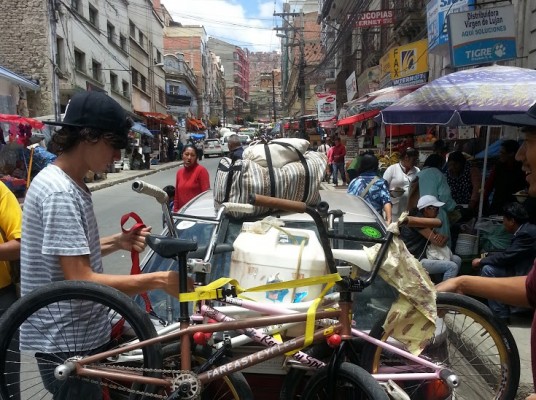 Strapping our bikes back on the car downtown La Paz.

At 5 AM one early morning in La Paz, our car was given the boot (That device that locks one wheel into place and disables you from driving away), so Taku and I had to make our way to the closest police station which was obviously half a city away only to know we had to pay a 6 Dollar fine to get it removed… 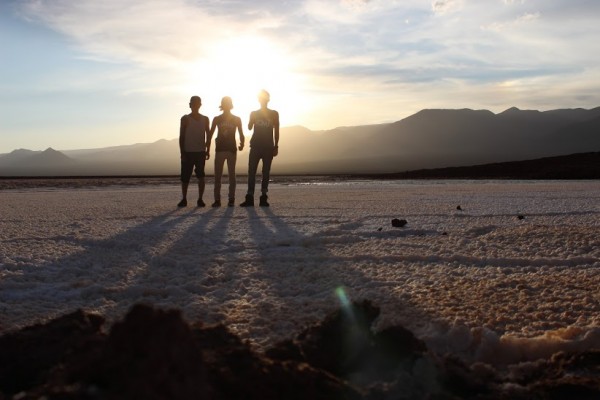 On this one stretch of road as we were leaving Lima, Taku , Dub and I all had the shits. Came a moment where it was Dub’s turn to have to abruptly stop to go by the side of the road, this time it was URGENT! As he stepped out of the car and was in a hurry to find a spot to do what he had to do, a Police went ”WOOP” passing by on the highway, and that made DUB shit himself !!!!! That segment of the trip was sooo funny, but not really… 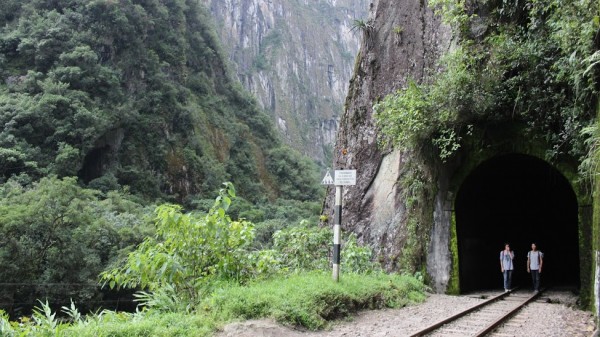 Traintracks and fancy looking tunnel by the Urubamba river in Peru.

At the Ecuador border, an English man approached us asking us to send a picture of the stamp in our passports, he had spent 5 years in Peruvian prisons and looked pretty tired, his plan was to get a fake stamp made so he could cross back into Ecuador and finally take a flight home to his parents. We couldn’t save this soul as it was hard to say what he had done or what his intentions actually were… 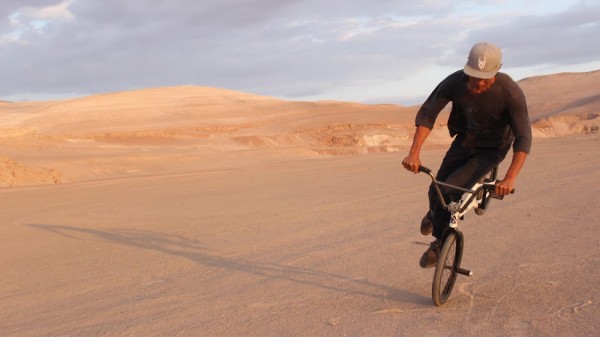 I can’t recall exactly how many Military Controls we went through, or how many corrupt cops we had to pay off to get going on our trip, but I can tell you that when you drive through South America, especially Bolivia, Peru and Colombia, you need these things; a fire extinguisher, a first aid kit, international car insurance, a valid license to go with your almost expired international driving permit and $$$. We learned to hide our money away as they would want it all if you showed your wallet had money in it. Two stories in particular, one Bolivian cop said our Bike rack was illegal and our bikes should be transported on the top of our car and we had to drive 100km back to La Paz to get the best cheap auto insurance, believe me you don’t want to drive back into La Paz after leaving it, and he made us pay him something like 5 dollars after holding us back for half an hour, as we left that Military Control we drove of to the sound of a dog barking and stumbling under our car, a dog had lodged itself under the car during our stop and he sadly died as we drove off… we told Dub he was a dog killer…

Secondly, in Colombia, where the Military Controls intensified, we reached one control where they discovered we were driving in Colombia without any international car insurance. He was about to impound our car and hold us at the Police Station until one soldier decided he was going to help us, thought this time we had to pay the sergeant 50USD ! We bargained for 20USD, which Taku handed over and we luckily got on our way. This could have been a lot more trouble than it was already to make it on time for Dub’s flight in Bogota. It’s crazy what people would do for money. 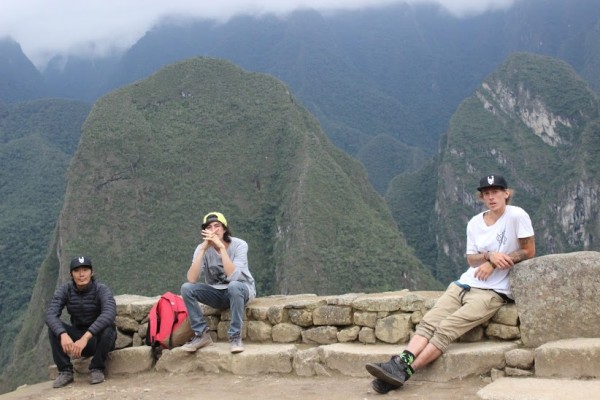 So I hope this was interesting for you guys because living it was pretty intense, the trip was not even close to be over after Dub left, it then continued all the way back to Ecuador with Taku, Juan Camilo and I but thats a whole other story!

Don’t forget to watch ”Against all Odds”, it releases 12PM (NOON) Eastern Time this Monday on;