Words that come to mind when I think of Mateus Beckmann. It is rarer that a kid comes into the sport and already at such a young age is so talented on front, back wheel, kickflips, whoppers, and bringing originality.
It really is one of the best moments of making Flatmatters, seeing kids come through the ranks, and this kid, is the prime example of that. Did this kid grow up via the internet and his progression is a reflection of that?
Whatever the case, it is a fact that Mateus had more progressive videos last year than any other rider, it speaks volumes of the kid that he updated the flatmatters exclusive edit with two more tricks just before he deadline, always progressing!
As we went back and forth getting the video ready, Mateus sent me a 3 minute video, two days before the deadline, he added two new tricks to the list, and I have no doubt today he could have added more.
To me Flatland is not breakdancing on a bike, flatland is an open canvas to which every person expresses their interpretation of what flatland is, and it truly is a beautiful thing to watch Mateus progress almost in front of our eyes, he gives me the feeling of a young Martti Kuoppa. Let’s celebrate his amazing talent! 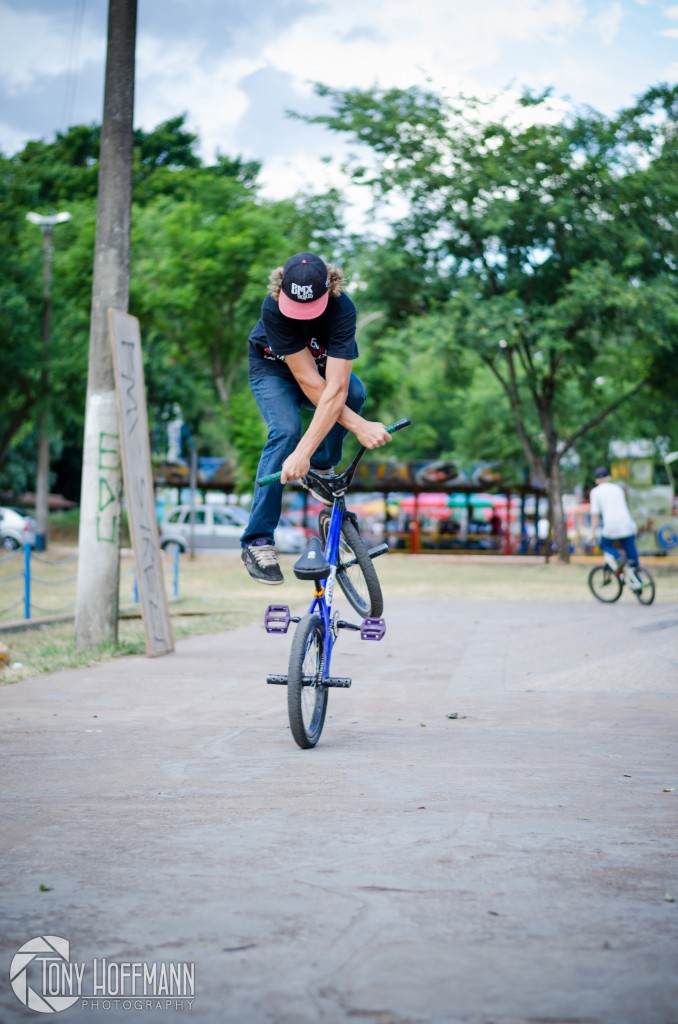 So tell me about yourself Mateus. I don’t know much about you, so explain all, how old are you? How long riding? Where are you from?
First, thanks for the interview Effraim! My name is Mateus Richard Beckmamn, I am 17 year old and I started ride in July 2009, I live in the city of Santa Rosa, Rio Grande do Sul, Brazil.

How did you get into flatland in Brazil?
I was doing dirt, street and flatland tricks but did not know what was bmx and had no idea about flatland existence, so I started searching bike stunts videos on the Internet and then I found Simon O’Brien’s video with his yellow bike and after that i Knew what was flatland and I fell in love with it …

How hard is it to get hold of new parts, frames, etc in Brazil?
We have a few Brazilian companies with some parts, but still not enough so we need to buy abroad, once the parts arrive in Brazil we have to pay a lot of tax. That makes flatland a very expensive sport for us.

What attracted you to riding?
What got my attention was the incredible moves you are able to do on a bike, particularly when I watched Simon O’Brien video on his yellow bike.

So your pretty young, only riding … years? What’s your outlook on flatland, your producing new edits almost twice a month? What’s motivating you?
I see flatland like a incredible thing, where you have the freedom to do what ever you want on your bike, every time I have some new idea I try to put it on practice and I record.  What motivates me to riding is the love I felt by Flatland… 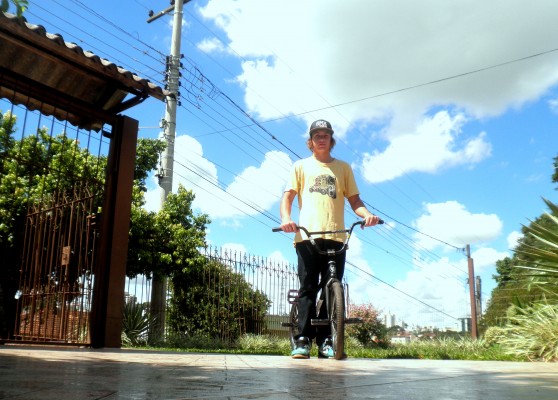 How is the flatland scene where you are in Brazil and in Brazil in general as a country?
In my town only have I, but has Tony and Vinicio who live in nearby towns and riding together sometimes. Brazil is very large, there are Flatlanders everywhere, many well known, for example, Balu, Lísias, Ederson, Bruno, Leo and Gilberto.

Do you ride a lot of contests, what’s your take on contest riding?
Unfortunately I live far from where the competitions of Flatland happen, i participated in only 4 events , but the contests are great because they always motivate us to riding more if I could, would be present at all Flatland events.

Are you sponsored by anyone?
I am sponsored by Master Bikes, which is a Brazilian brand of bikes that also sponsor Marcos de Jesus and Romulo War.

Do you plan to travel internationally?
Yes, indeed, but the international flights tickets are always very expensive so it’s hard, but i’m sure i will visit some countries soon if everything goes ok.

How much do you think the internet has played in your progression? I’m talking about daily motivation to see new videos, ideas, concepts, do you see that as a factor?
The internet is awesome for the practice of BMX, I got to know so many riders, your website has up dates and get all the information about what is going on and that helps me a lot to get my ideas, because i’m checking the blogs/sites daily. 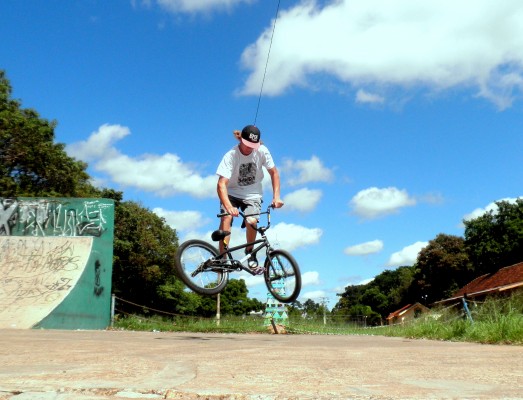 That’s great to hear Mateus, stoked on that! We imagine the climate in Brazil to be always sunny, is it really like that all year round? Or are there rainy seasons?
Brazil is mostly sunny, but has some stations that have a bit more rain, but that did not has influence much, I consider a good climate for practicing Flatland.

Are at school still? How much do you get to ride?
I finished high school last year and now I’m doing a course on the afternoons, and because of the course I practice something like 3 hours a day.

What does your course in the afternoon involve? What do you see yourself doing in the future?
It’s just a course of Electrician to boost my curriculum. I also want to do a course in English language. I always imagine myself doing just Flatland … haha …. But that is a dream for few, so maybe next year I’ll join the Army and shave my hair … hahaha … But in most cases the future is unpredictable, I’ll keep practicing my passion, and see what happens…

Scarily enough your videos remind me of a young Matthias Dandois. Uncanny with the similarities in name, riding at looks like your front porch way? Is that riding spot at your home?
hahahaha… here in Brazil they also make this comparison with Matthias, some of them make jokes and call me Mateus Dandois hahahaha. Yes, the spot where i’m riding in my videos is my house porch, but I dont ride there all the time, just to make the videos, I have another spot on my local skate park where the space its bigger.

You made a video to go alongside the interview, tell me about the video, and what you have been working on, how long did you take filming this?
I wanted to record a new video, I started record the kickflip hitchhiker last month, then you said you wanted to do an interview with me. Together we talked about producing a video with new tricks to go along with the interview, took me about two weeks to record the other tricks, but I could have done in a week if my handlebars Odyssey model Chase had not broken. 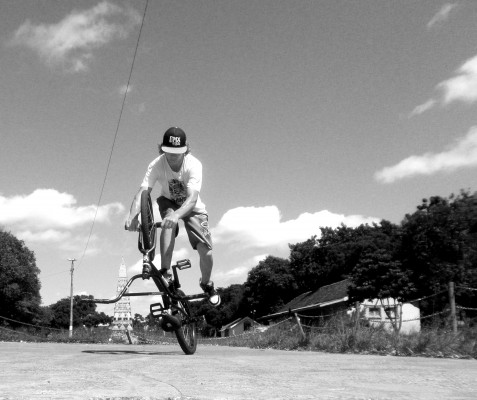 From all the videos it seems like flatland truly is an open canvas for you, and you are just playing with your bike, whats your outlook on your progression?
It’s how I talk, what comes to my mind I always try to put into practice. At the end of 2011 I started doing my own tricks, and from there I managed to do a lot, I’m enjoying my style, I think it’s getting cool.

You’ve swapped around brakes, brakeless quite a lot recently which is healthy. Which do you prefer?

I really like to use brake, but I also love to ride brakeless. I do not have a favorite. If in a few years I appear walking with brake, do not be amazed!

What music are you into?
I listen to all kinds of music that is enjoyable and can combine with Flatland, but my preference is Hip Hop, although I almost never use in my videos.

Do you have bike modifications out of the ordinary on your bike?
No, my bike has no modifications unusual, I’m just always changing the seat height according to the tricks that I want to do.

For such a young age your style is well rounded already, front, back wheel, whopper stuff and so on, is that something you feel from watching riders like Simon O’Brien and Viki Gomez is subconscious with you? Seems natural?
I think it’s very good to have wide variation of tricks, Simon O’Brien and Viki Gomez have many, many tricks, they are among my riders favourite, and also because of style, this makes them big names in Flatland. They inspire me too! Today I have great variation of tricks, because I always try to do what I think it’s cool, and so I’m having fun!

From a young riders perspective, what is your advice for up and coming kids in flatland?
For some people in the beginning Flatland is the best thing that can happen, for others not so much. Be aware of how is the world of Flatland, because Flatland can be very lonely and stressful, but at the same time can become very fun. Flatland is not for people with weak mind.

With all the videos you produce, do you dial in combos, or just move onto the next trick, always learning, it looks like you are having so much fun progressing?
Although 90% of my videos are composed of short combos, I have many sessions with some of my tricks, but I do not like to be repetitive in my videos, so I do like that. Yes, the Flatland is one of my greatest amusement, for me there is no bad day to ride, I’m always motivated!

Thank you Mateus, for your time getting to know you, and producing the video for flatmatters in such a short period of time! Any final words?
Thanks to my family, my friends, sponsors, and all who give me support!!

24 thoughts on “Mateus Beckmann – The Flatmatters Interview + Must Watch Edit!”