I first met Simon O’Brien back in 2012 at the Red Bull Circle of Balance. As one of the main photographers for the event I was asked to take portraits of all the riders, and I was able to use this time to get to know Simon. As we are both interested in Japan we hit it off right away and had a great time during the competition. 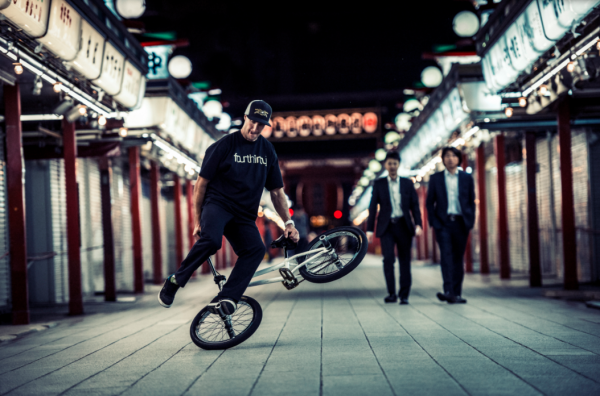 Fast forward to present day, and imaging my surprise (and excitement) when Simon e-mails me and lets me know he is in Tokyo for a bit and looking to get some shots in. Great! Having just quit my day job to be a pro-photog I jumped at the chance to shoot with Simon in Tokyo, and headed up from my home in Kyoto as soon as our schedules matched up. As it turned out we would only have 2 days to meet up and shoot, but this was enough to get some cool shots in the can that we were both happy with. 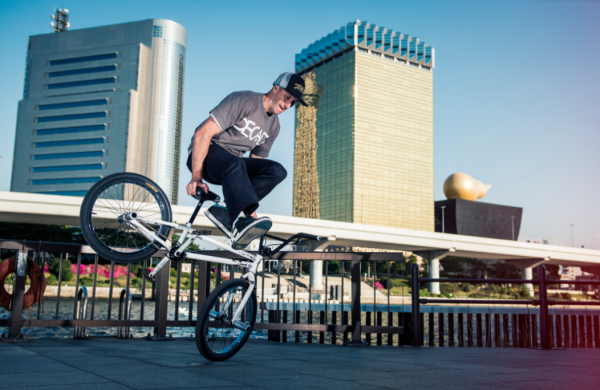 The first day had us meeting in Tokyo’s Asakusa, an older area of Tokyo that still has the old school flavour from decades ago. With zero spots in mind and no real plan at all we started to wander, but it didn’t really take too long to come across some cool streets with that old school flavour. I was even able to get the new Tokyo Skytree in the background of a shot! After a couple spots and hours of shooting, some foul weather started rolling in, and it started to thunder and rain. Perfect time for lunch! 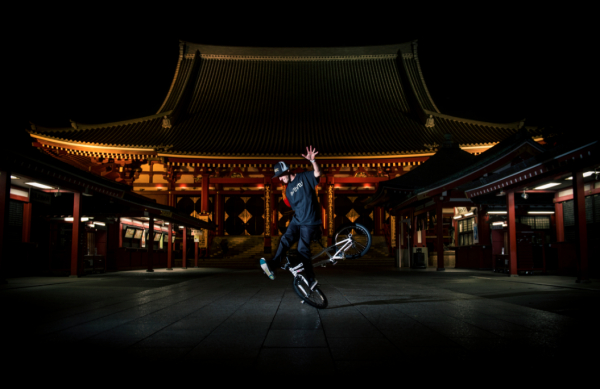 Finding a local udon shop we sat and chatted while waiting out the rain. Of course actually shooting photos is the best part of these rider sessions, but sitting and enjoying some hot udon with an X-Games gold medalist is a nice was to spend a day too. Simon is really interested in learning more Japanese, and since I have lived here for over 10 years and am pretty fluent, it was fun giving him pointers and teaching a little of what I know. 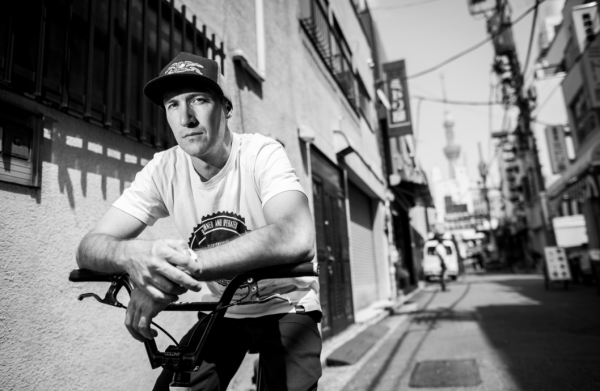 Once we were done the streets had dried so we were out shooting again. Things pretty much went like this for the rest of the day, ducking the rain, finding random spots, having a quick beer, chatting with locals (who were really enthusiastic with Simon’s riding) and generally having a great time. We even got some great weather in the end to finish off an amazing day. 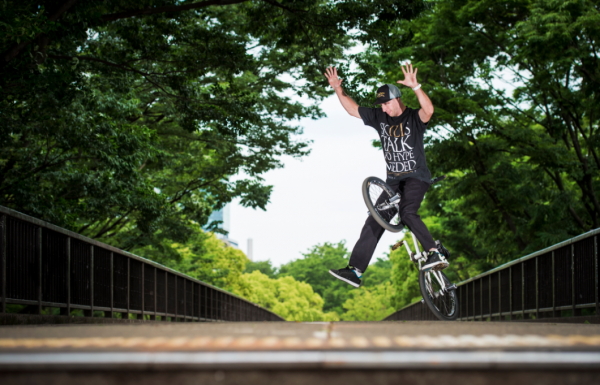 A couple days later we were able to meet up again and headed into Shibuya, Tokyo’s shopping district for young people, to see what we could find. After getting kicked out of our first spot we decided to head over to Yoyogi Park, and were lucky enough to find some pretty sweet spots there. Although Simon may not have been riding full time this last year as he was in the Navy, he is super professional and was always willing to try for “one more shot.” And even if we had to wait for people to walk by and that it was never a problem. 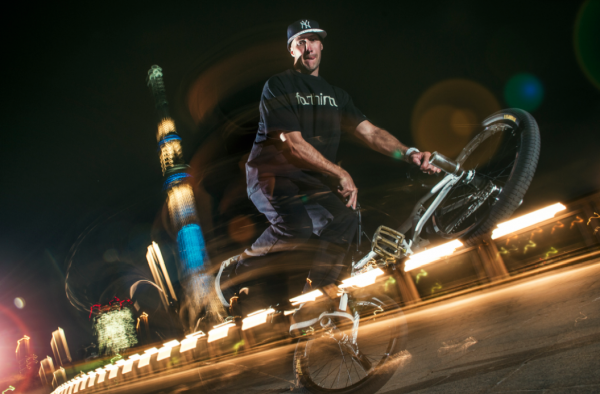 After shooting a few spots in Yoyogi Park we wandered through Harajuku (TOO MANY POEPLE TO SHOOT!) and ended up at the famous BMX shop Decade Tokyo. This is a mecca for flat land BMX in Japan so it was great to visit and meet the owner. If you ever visit Tokyo you must visit this place and say hi! I know I will be stopping by the next time I’m in the city. 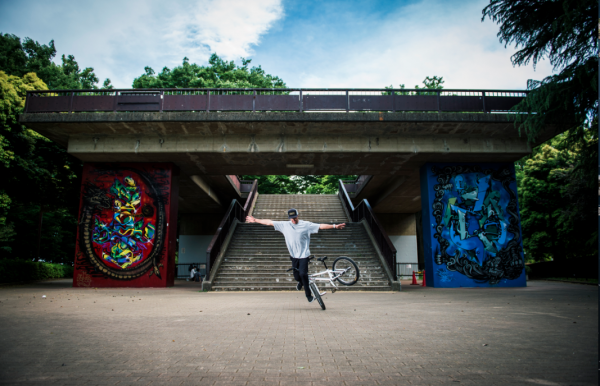 After getting a late lunch with the owner of Decade we decided to change areas and headed over to Kita Senju where Simon was going to be staying with some local BMX riders. After chatting with the riders it sounded like there were a couple local spots where we could get the lit-up Skytree in the background, so we headed out into the night, this time on bikes! My legs were happy we were not walking, that’s for sure.

Our first spot had us shooting on this really wide pedestrian bridge just up river from the Skytree. This was a great spot as the bridge was crazy wide, and pedestrians rather few. Using a slow shutter with my speed lights we were able to capture some really cool shots that I have never really taken before, but as the clouds were coming in and we wanted to try one more location that night we decided to ride on. Through Simon’s friend’s suggestion we actually ended up riding back all the way to Asakusa to try and hit up the temple at night. There are several areas of the temple that would have been great to shoot, but we could only get two spots due to the rain, and the local police finally kicking us out, just after I got my favourite shot from the two days of shooting too! 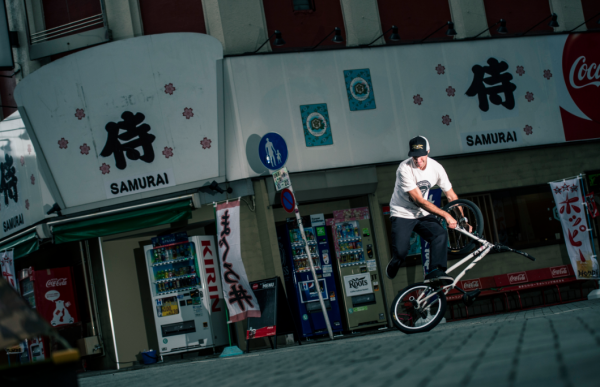 With the shoot done we decided to try our luck with getting our bikes on the train home (as it was raining pretty good by then), but let me tell you, garbage bags are NOT a replacement for proper BMX bike bags, and there is no way you can get a regular bike on the train. Trust me, we tried, and failed, hahaha.

In the end I am super happy with the two days of shooting, and glad that I was able to get to know Simon even better than when we first met at the Red Bull Circle of Balance. He is a super nice guy and I really hope we can shoot again while he is still in Japan.

Check out more of Jason’s work:

2 thoughts on “Simon O’Brien in Tokyo by Jason Halayko”