We are back with the continuation of the Flatmatters 2013 Awards Interviews! Today is the turn of Viki Gomez, your vote for Rider of the Year! Viki won the award by a landslide, and its understandable why! It is fair to say that Viki mixes the sponsorship obligations of being a true professional rider, and a flatland artist documenting his progression as well as anyone I have ever seen! Read on to see what he had to say about his year, his progression, brakeless riding, his travel lifestyle, and a whole lot more! 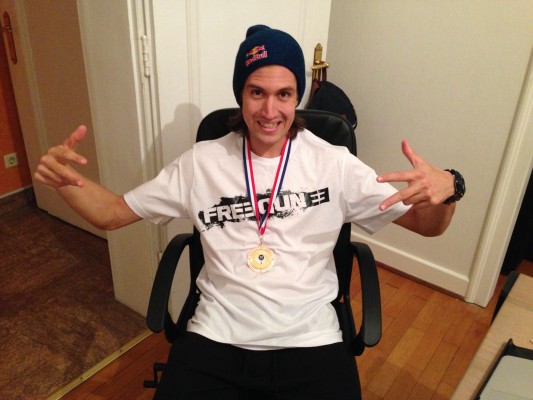 Congratulations for the Readers Choice 2013 Rider of the Year on Flatmatters! To begin with Viki, tell me about your year. It seemed you focussed a lot of effort into documenting your progression a lot more last year?
Thank you so much for this awesome Awards!!! I am so stoked about winning this and the NORA Cup Awards in the same year! 2013, was probably so far in my career, one of the best years, since I have progressed not only as a Rider but also as an entrepreneur with future projects. Progression for me is the key to self-satisfaction and motivation for the future, therefore, I focus a lot in riding everyday and trying my hardest and new original moves. I tend to document my moves a lot as what everyone knows, sometimes a beautiful trick can only be pulled once and perhaps never again, but with the edit, you might have the chance to go back to learn and pull it again! 😉 This is my progression strategy that I am glad to share with all the riders in order to support each other to always try new and hard tricks!!!

And of course you started riding brakeless, which seemed to kick start a new lease of progression for you with many videos in 2013?
As mentioned, 2013, was a year of taking risks, starting fresh and work hard in progression. I started the year with a huge step for me in my riding style. I took off the brakes and became a “brakeless rider”. This was huge at a start but allowed me to do longer combos with more flow and speed! I immediately felt a new way riding that in terms made me more creative and open-minded about new tricks and combinations of flowing moves. It was a great start of the new year in 2013, and it pushed me like a kid with his first bike to try more and more everyday! I was so thankful for convincing myself to try something new and “out of the box” in my world of riding! I started riding hard and filming bits and bits here and there, not with the intention to upload every clip, but for me to look back at, and after some months of riding a lot, it felt more balanced, and I decided to post edits, and thanks to this I believe the attention was brought to my progression, and this lead to winning the NORA as the “Number One Flatlander 2013”. Obviously, the other nominees are genius riders and therefore, I got really stoked be invited to go to Austin, Texas for the NORA Cup Awards, and then proud when I heard my name shout out by Leif Valin, and also take home the Cup! Having that said, I believe that riders who progress and push themselves in originality, (which the sports need to move to the next level) on a yearly basis truly deserve to win any kind of Awards!

Red Bull have you touring the globe promoting, it seems that you and Matthias Dandois use that lifestyle to fullest and still manage to progress?
Promotion for sponsors and supporters is one thing, however, when your sponsor allows you to travel the world, discover so much beauty, and also to progress in your passion and sports, then you can’t be anything but thankful and show your appreciation. Therefore, I take the opportunity to thank Red Bull and all my amazing sponsors!!!

The lifestyle touring around a lot is great fun and enriching, and it makes it even better having someone like Matthias with me on my trips!!! Matthias and I are each other’s idols and appreciate the different riding styles. That’s why we are a good combination for BMX Demos. We promote different sides of Flatland and the dedication needed to be where we are! BMXplore Tour that took place in South Africa during 12 days (and still manage to compete at the G-Shock Real Toughness 2 days after, after a 30h trip from South Africa to Japan!, haha remember that trip Matthias, wow! Big up for Matthias to still kill and win!), was an amazing time and this Tour didn’t end there… We’ll be back, and next time with sicker tricks!!!

How many trips did you make in 2013?
Ok, so this is a bit insane, but, I did over 63 events in 2013!!! 2013, was an AMAZING year for me all possible ways… however, when December came, I could definitely feel the need of a holiday, (for the first time really)!!! 2014 Started of extremely well though, winning the Flatmatters Awards for Riders Choice “Rider of the Year 2013”, and first trip to Gabon, Africa with Raphael and Alex Jumelin and other awesooome Dirt Riders, such as Mike Hucker (he taught me a Flatland trick btw “bar ride”, cheers for that), Luis Lacondeguy, Patrick Guimez etc. I definitely want to travel around more with these rad guys! It looks like 2014 is going to be a tripfull and successful year and I am so stoked and motivated for it! 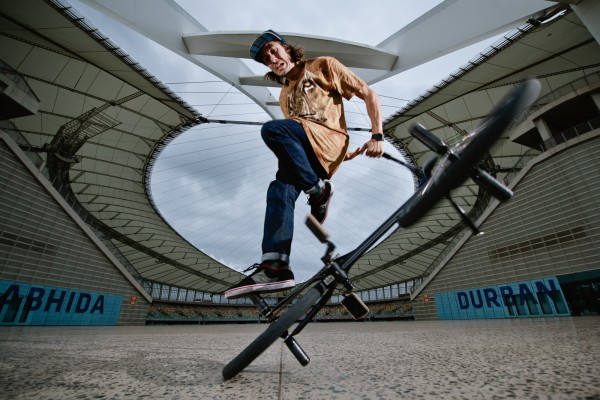 If you could pick one highlight from the year, what would that be?
Difficult question, since there were many amazing things, worth mentioning, coming to my life in 2013, but I’d have to say, winning the NORA Cup on the 17th Anniversary, after having ridden for 17 years!!!

What’s going on with Orbea for 2014?
Ok, so Orbea (Spanish Bicycle Company) and I have been working on a project (“revolutionary”) since 2011, that could be of use for various disciplines, a BMX bicycle suitable and dimensioned for multiple BMX disciplines, a so called “hybrid” BMX. I call it the “RUDE” BMX bike (Orbea RUDE). I’ve built up a team of “RUDE Riders” that rider for Orbea RUDE together with myself, where there are both Flatland riders and Street riders. Together with the team we’ll do BMX Demos around Spain in 2014, called the “The Streets My Kingdom” Tour, where BMX Flatland and Street is demonstrated spontaneously in the streets with a MC and good sound! This was held in 2013 in 10 different cities in Spain and was a huge success (Matthias also took part in it and we had a blast in Barcelona and during the European X-Games). This was our way in bringing back Flatland to the X-Games and hopefully, it was appreciated and will come back again this year 2014.

What are your personal plans this year?
My personal plans for 2014 are to progress and have fun! Every year, we Flatland riders, ride harder and promote our sport more and more, in order for it to grow and get the appreciation it deserves! And this should be the plans for every rider every year!
Apart from that, there are certain great projects going on for this year. In February, my own signature underwear collection with FREEGUN will be released, then my signature pedals with Moto Bicycles, and this is huge for me since it is a first, so be sure to support that ;). Another filming edit is about to hit the internet, a project I made together with Red Bull Media House. Some exciting times in Brazil, I definitely look forward to, and some other fun projects too are to come up! So I am thrilled to get this year rolling!

Any final shoutouts Viki?
Thank you Effraim and Flatmatters for the awesome Awards (great idea) and for having this interview with me! And to all the readers and riders, let’s Ride more and have even more fun!

Thanks Viki! Congratulations one more time!