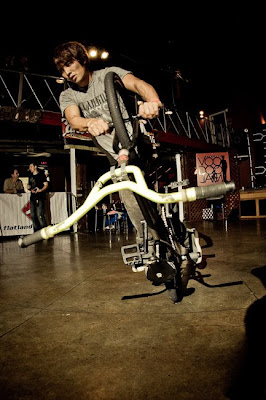 The 2009 World Circuit champion, has almost had a complete swoop on all the big contests this year, two footed backwards spinning death truck ala Foaksey. 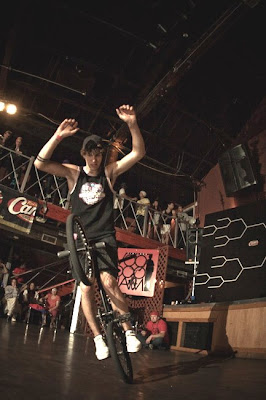 So I’m guessing your pretty tired after the weekend Scott? Are you happy with how it went?
Yes after dropping of the last guy at the airport yesterday I went for some dinner with my family then I fell to sleep and woke up 14 hours later. Crazy!
Yes I was very happy with it.
It’s pretty evident from your “is it worth it” post that you are puzzled as to lack of support ESP from American riders? Has much come of your post?
Yes the post pretty much shows my frustration and it has been this way for about 3 years. Its just now that I actually have said something. I don’t get it really?
As to what has come of my post is a few email but not much. Pretty much standard for the USA Pro/Master class rider. I guess they are all just happy with what they have in the internet and at there home town so whatever.

We watched the contest in silence haha which is another story.. Any personal highlights for you this year?
Terry’s qualifying run was really awesome. Issiah Jordan, Diego Tejada and all of the Expert class was dope. They deserve more and I wish I could give it to them. The freaking crowd was the highlight as well. Those people are crazy for Flatland. They come every year and go nuts!

With the lack of support in some areas do you feel like you are fighting an up hill battle?
I guess anyone would feel that way a bit. But every year we just seem to make it happen. Who knows what the next year will bring.

On a different perspective to the lack of American riders, does it matter when voodoo is part of the world circuit?
Of course it does. The BMFWC is being watched by a lot of people. More than you can all imagine. There is plenty of opportunity for sponsors and riders alike.

Shintaro Misawa is overlooked by many, effortless tech style from one of the worlds finest, just went out to Ucchie in a tight battle. 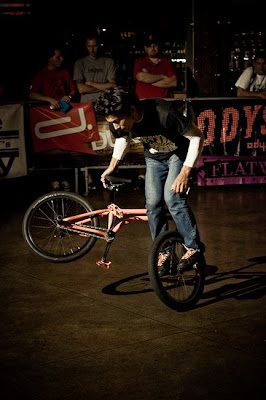 One of the main points for me, I’ve set there as a judge and as a rider, so I feel like I can comment on this, there needs to be some guidelines set as to what is a pro rider, and it should be more of a challenge to get into the pro class? It should be a prestigious thing you know, a big deal! Its about quality not quantity…
If people had to qualify to be a Pro then we would have a contest of 3 guys. No one would even participate but a few guys. And what contest are the bases of this qualifications? What riders are going to participate? We just might run off even more riders. While I do totally agree with you, I think for now the riding speaks for itself if you are a Pro. I think if we start this then even less riders will ride in contest.
Then again maybe its the answer, I am just not sure. There is so much uncertainty that its a bit scary. Like things are going underground. It seems as though we just do not have enough riders to worry about that right now. We just need a solid foundation of contest to grow on at the moment. We need to concentrate on actually keeping this alive and riders entering Pro that are not Pro is not that big of a problem at the moment.
I really dont know, but I will be thinking about it and I need some time to process my thoughts on everything.
I have a question for you. So you would not qualify as a Pro because you did not even compete this year? Just curious?
What would you say to be the start for the whole qualifying as a pro? Because we have to start somewhere.

I would agree with that, and I think the same goes for other riders there has to be some guidelines and prestige to being a pro. I cant be about a riders ego, thats nonsense..Last year I was ranked 2nd in the uk groundroot series, and I was working towards a system whereby riders can’t just turn up and ride pro. Whats wrong with having a banging am class..this year at the worlds we were going to have a qualifying round for guys who wanted to be in pro that weren’t top 30 in the world. It’s not about quantity but quality.This will help the sport grow, its too easy right now. Maybe a qualifying round or something like that would be the answer, it is going more and more underground because people are happy to sit at home and watch it live on the Internet, almost like why pay $2000 to go to voodoo when you can watch it for free. The rankings is a good incentive, seeding the riders for battles, I think it brings more to the sport. What do you think of that?

I think your points are great but my brain is hurting now and im going to ride my bike.

Yuki, is another japanese backwheel killer,all x’ed up, mid session outside the hall. 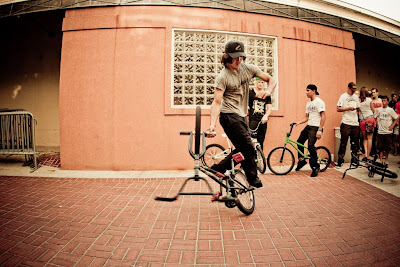 Terry Adams with a Katrina on homesoil. 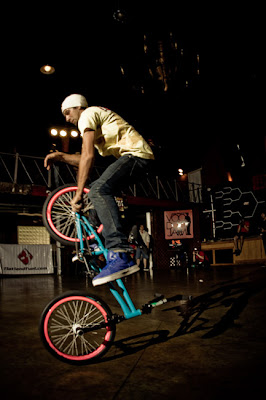