Last weekend as we said “Hello Springtime” here in the UK. I was invited up to Spin London 2014 to MC some flatland shows by Jason Forde & Johann Chan, an event previously I didn’t know much about, and perhaps you don’t either. So I caught up with Johann Chan to ask him a few questions about Spin London 2014, a fun weekend with potential for the future! Read on! 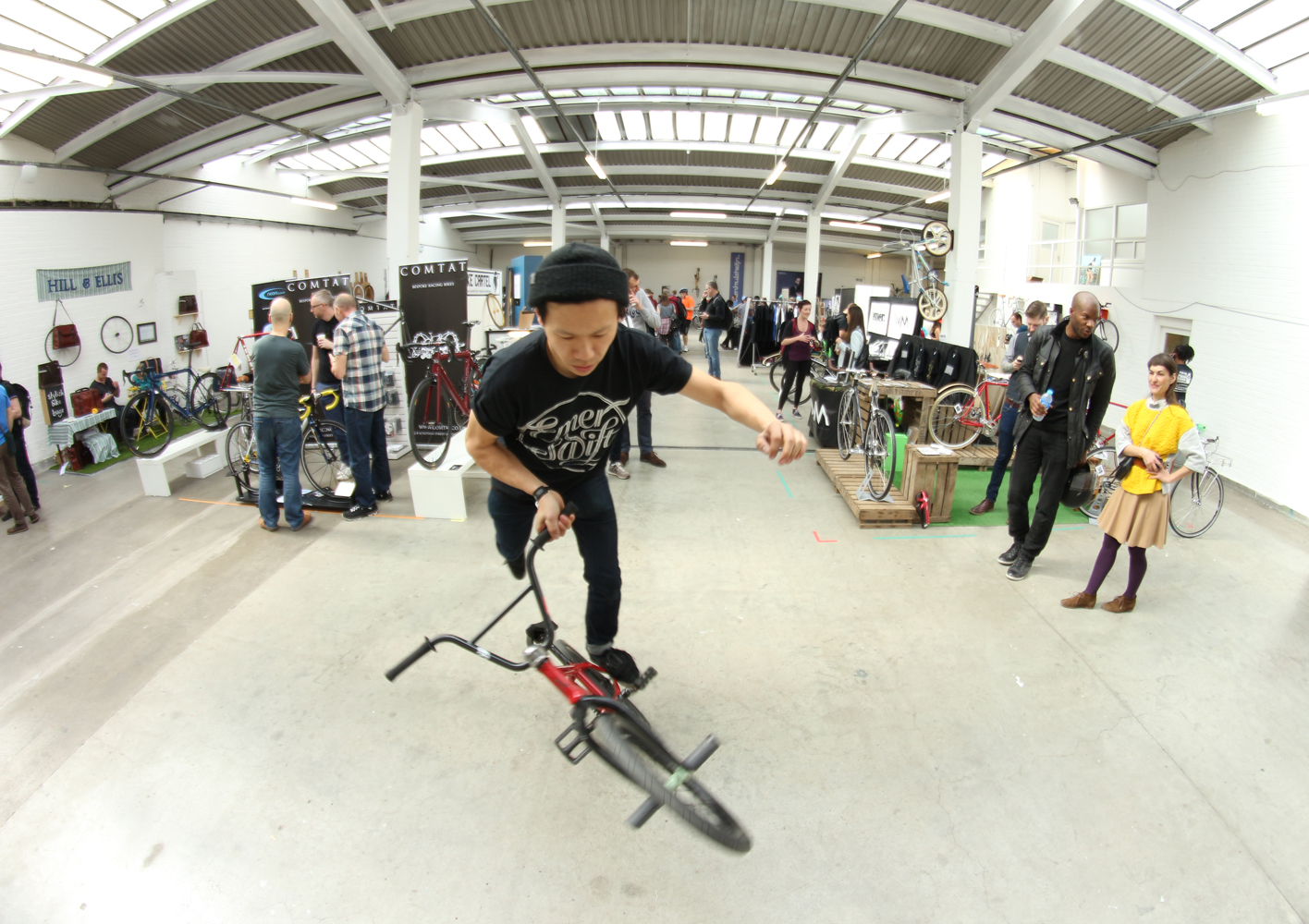 What exactly is Spin London all about Johann?
Spin LDN is a bike show/event held in East London. It has lots going on: guest speakers, cycling films, photography exhibitions, a variety of activities and stands from some nice home grown brands. It’s an interesting place and a great place to showcase flat.

How did you get a flatland gig at Spin?
Last year I exhibited some photos, helped out with one of the talks, and me and Jason Forde rode in a few demos which went down really well with the crowds. When speaking to Alex Daw about Spin this year, he was cool enough invite us back. 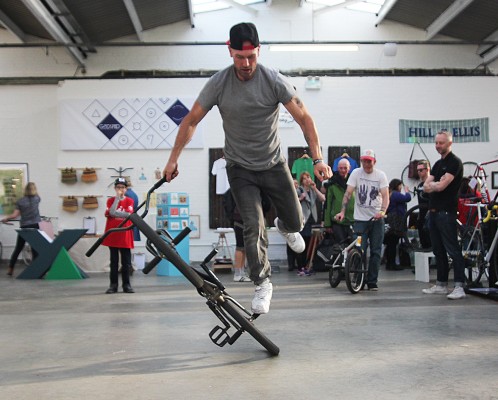 Was it an important thing to bring flatland to a different crowd?
Spin is located at the Truman brewery, off London’s popular Brick Lane, It’s a great place to get flatland out there, getting it seen in a good location, with great surroundings.

I love riding by myself at my spot, but riding in front of people is exciting too. Flatland doesn’t need be an insular sport, after all it can be done anywhere with a good floor. I can be too complacent with riding in a certain way in the same place, and changing that can sometimes have positive effects. Plus I feel flat deserves to be seen. The Spin guys run a cool laid back event so it’s nice reconnecting flatland with the outside world on our own terms to a certain degree. 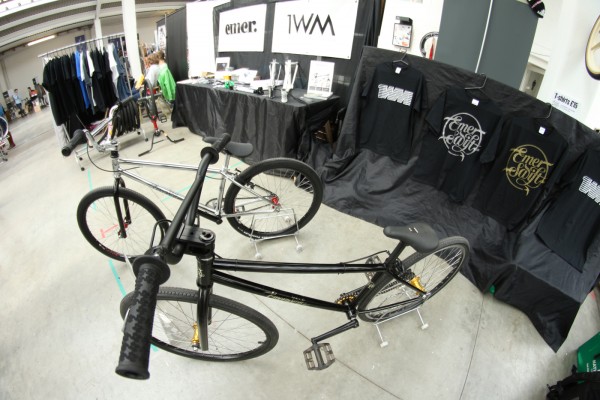 It seems with the Royal Festival Hall event & now Spin, there is a bit momentum going with your shows. You link up with Jason over at 1WM, you guys running a show team?
Jason Forde runs One wheel Motion, and he’s been getting some quality gigs, Jays pretty cool with sharing the love, so involves lots of riders, without the battle format which goes down well Recently we’ve had the opportunity to ride at the royal Festival Hall, the Design Museum and the V&A.

Our friend Alice Marsh deserves some props as well as she’s been instrumental in triggering some of these opportunities.

Besides the flatland shows what else were you involved in at Spin?
We were given a stand space in exchange for the demos, so we exhibited the Swift cruiser, Bizhouse products which we’re importing, t-shirts etc.

We set about promoting One Wheel motion, we had my computer and monitor (which looked like it’d fallen out of an office window from the 1980s) playing 1WM and other flatland videos.

Any plans after holding two show events of putting on a contest?
I’d definitely like to- I’ve always wanted to put a contest on again, I’ve been looking for an ideal London floor for years. From the Battle Vibes contest last year, you can see that there’s certainly a rider interest for it. Jams are fine but even a small amount of structure & a sound system make a huge amount of difference to an event. 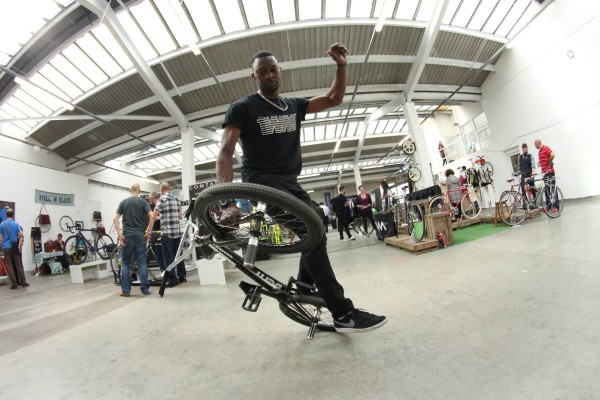 How did you feel this years event went?
Last year, I showed up put some photos up, did a Q&A, rode my bike and drank beers- it was a massive doss in comparison.

This year, setting up the stand, display bikes and demos had so many logistics : liaising for the floor, looking after the stand, building and selling the product to cover peoples’ expenses. It turned it into something different.

So a lot more work this year with a sacrifice to the riding & when the main reason you enjoy BMX is for the riding, and then you have so many organisational tasks, that the riding suffers, you ask yourself, is it worth it? Having said that, it’s really exciting seeing something come together, super good to see everyone, and great to hear people talking and buzzing after the event.

Seeing all the boys, Jay perform for the crowd, and people getting stoked on flat is priceless. I’d definitely recommend trying to set up a flat demo/jam within a decent show or event. 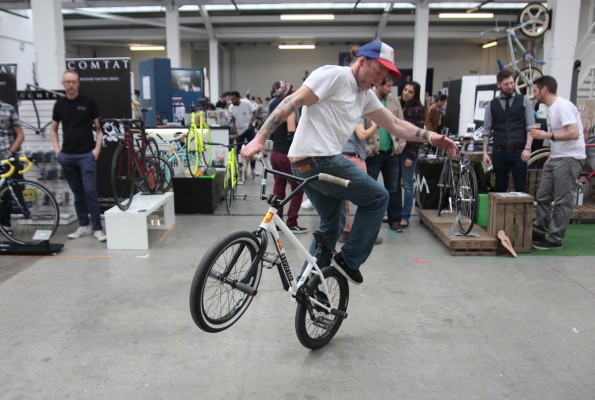 King of the banter, Amos Burke working the back wheel.

Any shoutouts?
Lots of people helped out, Jason Forde my partner in crime, Phil Dolan for the stylish VW camper transportation. Laura Matless for helping out with the stand. The riders Steve Green, Bence Pozsonyi, Norbert Bukki, TGM Maz, Amos Burke, Vlad Shcherbakov for pics.
James White / ‘The Black Drape’ showed some amazing drape hanging skills by taking the initiative and hanging our banners and black drape in a fashion that would make a spirit level jealous. And of course your good self MCE / The Big E, props to you for taking on the Mic, and also mucking in with the floor sweeping & coking the floor.

Cheers Johann! A fun weekend! Thanks to both Johann and Jason for inviting me up to London! Looking forward to seeing where this event heads in the future!