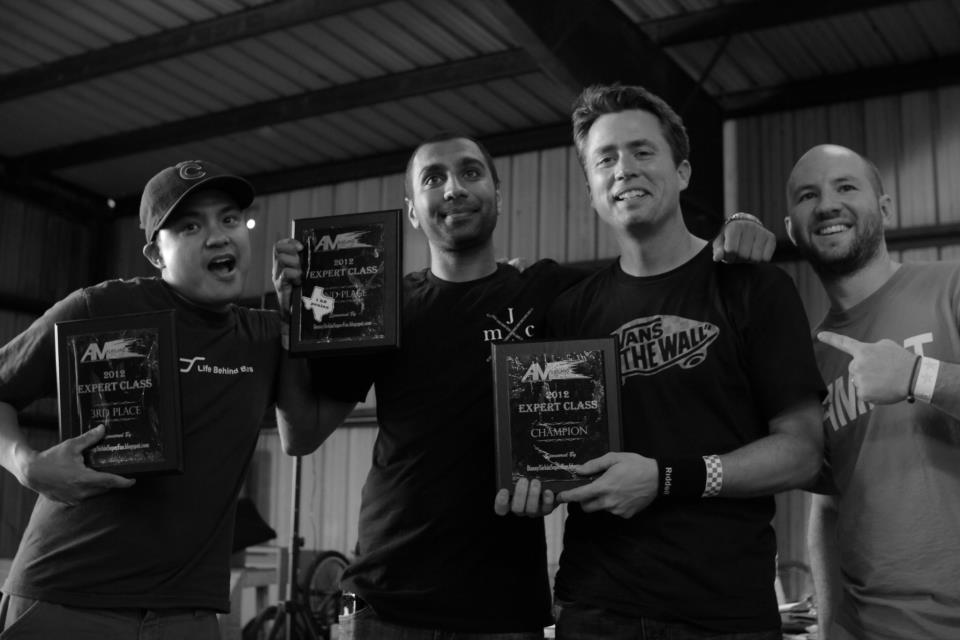 When I think of Todd Carter, I think of longevity, commitment, Cali, the AFA days, and love for flatland. This past weekend it’s pretty fair to say I don’t think the year end AM FLT title could have gone to a more committed rider that’s so deserving of the award. I wanted to catch up with Todd to talk about his game plan going into the final round, his runs, the Am Flat series, and a topic we are all talking about currently “turning pro”. Read on to see what one of the nicest guys in the game had to say….

Yo Todd! Firstly congrats on Second place at Texas Toast, and also winning the year end title? How you feeling about your runs, winning the title and the contest in general?
Thanks so much, Effraim. I am stoked. At the end of the 2011 AMFLT circuit, I decided to move up to Master Class. But in 2012, the classes changed. Master Class dissolved and all of that talent either moved up to Pro, or merged with the current Expert Class. So even though I didn’t really change classes, the pool of riders changed. It was pretty intimidating, and honestly still is. At the start of the season, I never would have imagined winning the Class for the year. It’s still pretty hard for me to believe. I also broke my hand just before JoMoPro and had to miss it, so I thought for sure I was out of contention. Needless to say, it was a great year, and I am very humbled.

I actually had four runs at Texas Toast, (because of the run off) and three of them felt pretty good for my riding ability. I ended up cutting down some combos and dropping some tricks from my run that I was struggling to pull. So, I didn’t bust out for sure, but rather just focused on trying to pull what I thought I could.
The contest was incredibly fun, and the Austin BMX scene is pretty inspiring. Riding at the OG also helped to make the weekend about much more than just a contest. There are so many rad people that ride flatland, and I am thankful to be a part.

What was game plan coming into the final round?
My game plan was to try not to think about it. 🙂 I really tried to just focus on hitting my tricks and not to worry about the rest. For me, I don’t focus on multiple things really well. I think I ride better when I simplify. I can’t focus on how good other riders are, or how my tricks stack up, or any title up for grabs. I chose to just think about my own tricks and hope for the best.

What kind of practise did you put into getting ready for the last contest of the year?
I rode as much as my work schedule, sleep schedule, and body would allow. It helped that there were more daylight hours through the end of summer to prepare.

Did you feel much pressure going into the final round run off with Alex Johnson, & the year end title at stake?
I felt tremendous pressure! 🙂 Probably the most pressure I have ever felt for a contest run so far in my riding career. If you watch the videos in the highest resolution (1080) you can see how badly I am shaking, haha. Ron Monis said he thought I was going to shake off my bike during the first juggler combo. 🙂 The shock of having to go back out again, in the middle or pro practice was also pretty nerve-wracking. The pros were really cool about it though, and that made it easier.

How do you feel the AM Flat series has helped flatland in the US, and also your own riding?
I think the AMFLT circuit has made a real difference for a number of riders including me. For years, I would classify myself as a rider who learned many different types of tricks, but only mastered a few. I would work on a trick until I pulled it a few times. But after that, I would start working on another new trick, and then another. Although I technically “learned” a number of tricks, I couldn’t pull most of them when I needed too. I think the AMFLT circuit helped me redefine what it means to pull my tricks. For me, it’s the difference between being able to pull a trick…and having it so dialed it is tough to miss the trick. There’s a big difference there for me. I should say that there is nothing wrong with either kind of riding at all. Who doesn’t love working on, and pulling new tricks? I just wanted to be able to pull some specific tricks when I need them most, and I believe the AMFLT circuit pushed me to dial in a few tricks in that way.

There’s been quite a bit of debate about “turning pro” after Texas Toast on the site, now you’ve won the year end title, are you moving up? It seems to me Masterclass would be a good idea? What are your thoughts?
I see both sides of the debate. I also think each side has made some very solid points. On one hand, I don’t want to make it tougher for folks like Shaun Lapsley to move up to Expert Class. The dude is super original and has a ton of potential, and the last thing I want to do is discourage riders like that. But at the same time, I quite honestly just don’t feel like I am even close to a Pro level rider. If I had to ride a contest run after really any of the Pro Class riders I watched last weekend I would feel embarrassed. I just don’t have the tricks. I want to work hard, and if I could get there one day that would be a dream come true. But in opinion, I am just not there yet. So to answer your question, I am not planning to turn Pro yet, and at the same time I am really hoping that doesn’t discourage anyone who wants to move up. This is a tough one.

What are your plans for the off season?
What off season?:) I am working on some trick ideas that I would like to have down before the Toronto contest in March. If history is any indication, I typically start working on way too many new tricks at one time, and gradually settle on a few that hopefully will stick.

Any final shoutouts?
I would like to give a shoutout to John Yull and family for putting me up the whole time I was in Texas, and letting me bum rides to and from everywhere. (Including the airport at 5:00AM) Also, a special shoutout to my AMFLT family for all of the inspiration, laughs, and support. You dudes are among my best friends in life, even though we live in different parts of North America. I have mad respect for each of you.
I also want to thank God for the gift of still being able to ride my bike, and for the experiences of meeting so many great people. Thank you Effraim, for the interview, all you do each day for flatland. And for anyone still reading this, thank you for hanging in there. I am so grateful for flatland, and I am humbled to be able to share some of my experiences. I am looking forward to seeing many of you next year! Thank you!

Thanks for your time Todd, this was awesome! Congrats once again!

Congrats to Tony (pictured with Steve Lapsley) taking the 2012 Veteran AM FLT Title! 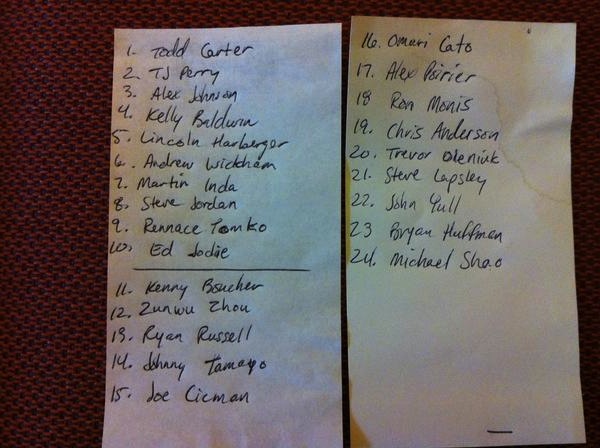 Rather than type out all these results on a Sunday Morning, here are the qualifying from yesterdays AM contest at the Texas Toast contest. Congrats to Todd Carter for qualifying first, I believe he will take the AM Flat title if he gets top 3 tomorrow. Also great to see TJ Perry back in the mix, top ten go the final that will go down today! Good luck to all!

The flatweb tv guys had a few problems with the COB teaser yesterday, its now up, and looks amazing! The full show drops on Tuesday 9th October, well worth a watch for insight from Scott O’Brien, myself, Mike S, Moto Sasaki, Dez Maarsen and the winner Viki Gomez

This month we take a look at arguably the craziest flatland event to go down in a long time, the Red Bull Circle of Balance in Kyoto, Japan. We preview a recap show we are working on with interviews from Viki Gomez, Kerry Gatt, Moto Sasaki, Dub, Dez Maarsen, Mike S, Effraim, MC Scott. We see how happy a new Jungle Rider frame can make you and preview the upcoming Texas Flatland Roundup. Also, just as evidence, we’ve kept an interesting video up on our Vimeo feed. Head over to https://vimeo.com/50540459 to see what we’re talking about.