It’s time to get into what I hope is the first of many interviews relating to the 2021 Flatmattersonline Year end awards and the winners. First up, we have Editorial Choice Breakthrough Rider of the Year, Varo Hernandez! Let’s get this rolling…. 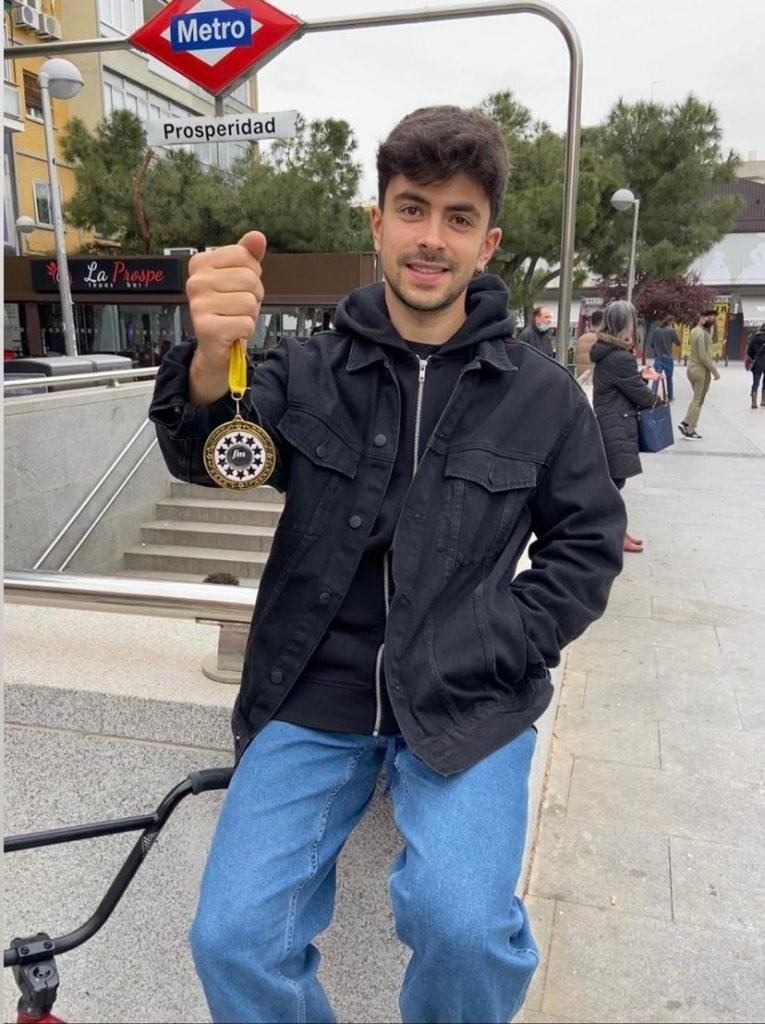 Varo! Congratulations Breakthrough rider of the year in the 2021 Flatmattersonline year end awards! Firstly how do you feel about winning the award?
Hello everybody! Man winning this award was such a nice and unexpected surprise. It was a great reward after all the work I have been putting for the last months and a motivation to keep on the same way.

What was the highlight of the year for you last year? How do you feel competing in general what are your goals?
There were many good moments for me in 2021. Joining Fly bikes, Never Off The Battle, winning the Madrid champs, making it to the final of the World Champs… but definitely the one that feels more special is that silver medal at the European Championship.
I had a terrible bad run in the qualifications. I remember we had to make the finals right after the qualification, because there was a heavy storm coming, and my mind was completely fucked up after that run, but I managed to make a good run and make it to the podium. That medal really built my confidence and helped me open new doors.
I love competing and the process that it takes to be ready for it. When competing I try to not think on any specific result and I focus on my riding. My goal is giving my 100%.

Talking about breaking through!!! What are your expectations for the up and coming X Games in Chiba, Japan? Congrats on being invited also!
I still can not believe I am one of the 8 invited riders, look at those names!
As I said I want to give my 100%, ride as good as I can and show the people at X Games how sick BMX Flat is. In terms of any specific result, I try to not spend time thinking on any outcome. I have been practicing hard and I feel ready.

Fresh on flybikes too, things seem to coming into place for you? Was that hard situation to leave We the people?
I am very thankful to WTP, honestly everything was great with them, but when Fly Bikes came to me I had no doubts it was the right thing to do. I grew up riding Suelo parts (the old Fly Bikes line for flatland) and I always wanted to ride for them, plus I had very good friends on the team and joining the Fly family felt the best decision at the best time. 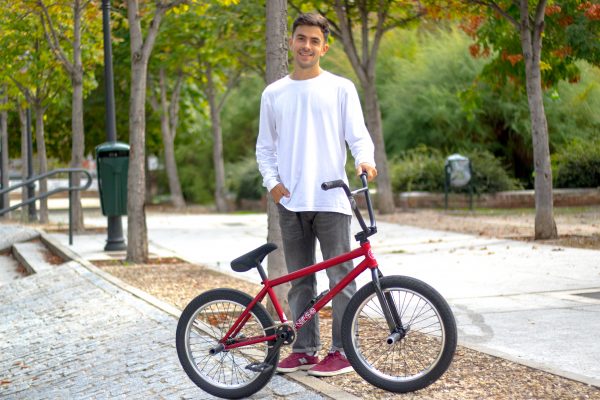 Fly’s a Spanish brand, was that a big factor in your decision? What’s your plan with them? Signature line?
Moving to Fly Bikes felt a natural move to me since some of my best friends in BMX like Layos, Teresa and Courage are part of the brand. They showed me how much they really wanted me on the team from the very beginning and the decision felt the right thing in every way.
And yes, we have some sick stuff in the works! We have made some 3D designs already and Im hoping I get to test the first prototypes soon.
We are not in a hurry to release the new parts and want to make sure they are perfect before putting them in the market.

What’s your daily riding routine right now?
I try to have a similar routine from Monday to Friday. I wake up early and go for an early session, I started going to the gym recently, and go for a second session in the afternoon-evening. I stopped university a couple of months ago and BMX is my main focus at the moment.
Then on Saturday mornings I teach BMX to kids at a sports center in Madrid and then I go with the flow for the rest of the weekend, some weekends I ride more if I feel like it, and some other weekends I take it off. 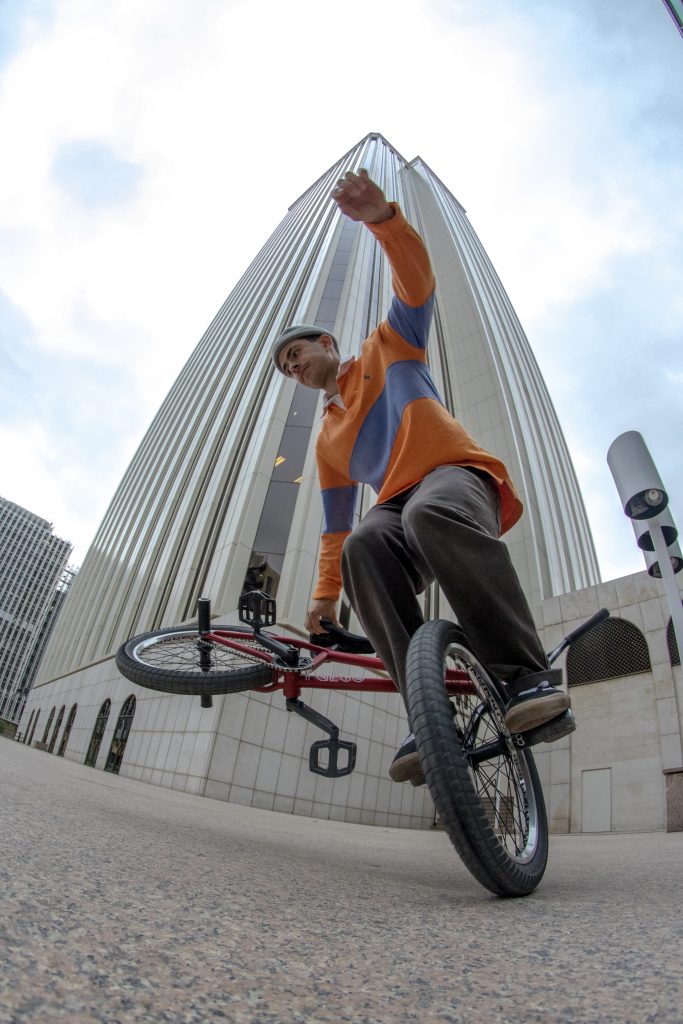 Who do you ride with?
I mostly ride alone, specially in the mornings during the week. I like being by myself and get in the zone. Then in the evenings I mostly ride with Alberto Moya and sometimes some of the other guys from the Madrid scene come too.
On the weekends we usually meet and ride all together having little jams and then move around the city.

That relates to my next question. Are you riding one spot in Madrid? Or move around?
I have 2-3 favourite spots and spend most of the time in those, specially on El Templo, the covered spot. I love it there, floor is perfect and there is not many people walking through. This is where I go ride most of the times in the mornings.
Then we have CLN, a big plaza in the city where you can usually find skaters and people talking a walk or just chilling there which gives you a more chilled vibe. I enjoy coming here on the weekends but this is where most riders in the city go for sessions. 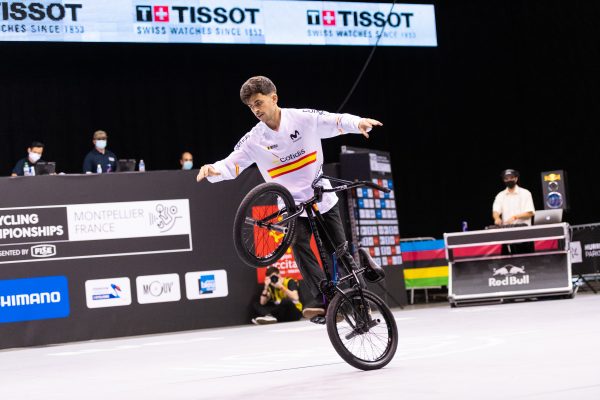 Do you feel yourself more a contest rider or video rider?
I don’t know, I need both of them. I take both as a challenge and love the process of working on consistency for a contest, but I also love planning a combo for an edit, searching for the spot, practicing the combo to get it as clean as possible for the video etc.
I love both, but I guess I spend more time thinking about contests and getting ready for them so I might be a contest rider.

How do you feel about the debate on Instagram vs video parts?
Instagram is a great platform to discover new riders. I enjoy posting daily clips and watching my friends new tricks and posts, but it sucks that we are loosing the video part concept.
These days as soon as you pull a combo you can post it on social media, get the instant gratification and because people will forget about it in two days you don’t have to invest that much time looking for a new spot, making sure the trick is perfectly clean etc.
I know its hard to keep the clips for weeks or months until you can put them all together in one piece and release the video part, but I love this idea of really taking the time on each clip, making sure they look good and are properly filmed, and then release a whole 3 minutes video part all together with the work you have been doing in the last weeks. 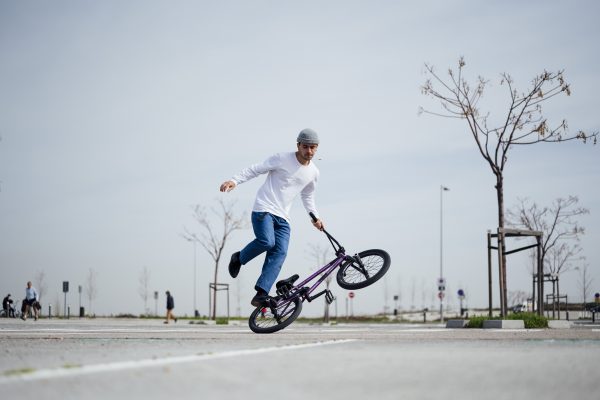 You just filmed your welcome to Fly bikes part? How long did you film for?
It took Rafael Black, and me around 3 months. We would met one day to get one of the clips and then not try to film anything, until I had another combo ready like 1-2 weeks later.
In the end it was only like 6 days of shooting, but we also took our time looking for new spots.
I love shooting with Rafa, because we both have the same approach and want every trick to look good. Some of the combos in this edit were pulled and filmed few times before but because they were not exactly as clean as we wanted we decided to delete the clip and go for it again until we got them as we wanted.

Any final words Varo?
Just want to say thanks to my family, friends and the people who supports me. Thanks for giving me the chance of doing this interview and all the hard work you are doing for flatland with Flatmattersonline and thanks to everybody who took their time to read this! 🙂

Thanks Varo, that was fun catching up. Congratulations once again on the award and I’ll see you in Japan shortly!

7 thoughts on “Varo Hernandez Interview: The 2021 Flatmattersonline Awards Breakthrough Rider of the Year”