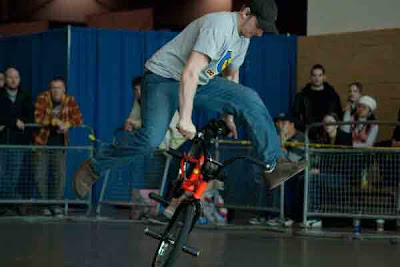 Whats to say about Cory Fester? You might call him an artist, his video sections are proper. Theres no messing about, he works at his parts, for the most part with never seen before tricks, continuing on the path lead by the likes of Andrew Faris, and Dan Rigby. Much respect due.

Ok, Cory, just back from the Fu5 in Toronto, you were saying you hadn’t rode in 4 months before the contest, how did it go in the end?
Pretty good. I rode ok, just happy to be back on my bike more than anything.

What’s your mindset going into a contest like that with no preparation?
Haha. To be honest I was just hoping not to get humiliated more than anything. I just want to make sure I go out and pull some things. The biggest fear is going into a 4 minute run and not pulling anything. That sucks.

Did you pull much stuff?
Yeah I had a pretty decent first run, but the second run I got caught chasing a trick for like 2 minutes. You think I would learn not to do that.
That’s hard though when you know you can do it, one more try? Then its over.
Usually I try and put a limit on tries in a comp like three, but then after the announcer is getting the crowd going and from there you are pretty much committed to it. It’s hard to switch to another trick when everyone wants to see the big trick.

Talk to me about the difference between contest riding and video riding? I mean you are one of the best (and creative) video riders, there something totally different about videos isn’t there..
Ugh thanks. Yeah, I think for me the biggest thing is the mentality. I think a video shows more of what you are capable of learning vs. what you can do everyday.

What’s this video I’m downloading now? Your latest project right…
Yeah, your getting a sneak peak at my new video section unedited. and you are being sworn to secrecy haha..

Haha I love an exclusive, its pretty epic I have to say! When and where will people be able to see this?
I am not sure. It’s going to be in Stewart’s(Munro) next video release, sometime this summer. I took five months to film it last year, so I hope people will enjoy it.

Lot of variety, totally different feel than HTCS. The ender is stupid Cory! Amazing…
Yeah, I really try hard not to repeat very many switches. Whenever I film for anything I start out with a list of ideas and just learn them from there. Most of the switches in the video I learned just for that video. I think that’s why filming burns me out so much. It’s hard to try and put a timeline for learning tricks. I think for this video I had to learn and film each link in under two weeks to stay on schedule, gets kind of crazy with a deadline.

Feel much pressure to produce an even better part especially after “Here comes the sun”?
I feel pressure for anything I film for or do for that matter. I always want to be the guy with the new crazy switch. It’s a lot to live up to sometimes.

Videos are timeless, there’s a nice quality about being able to go back and watch someone’s section
Yeah, I really like seeing guys do tricks you don’t normally see. For me, Martti is hands down the best rider on the planet, just because of what he’s done on video..

Yeah, have to agree with you especially after watching the Kgb DVD and also take into account all his intrikat parts, absolute monster..

So this is the first section a lot of people will see you on the OG Kunfu frame, how was the transition from going from your tank of WTP DIV haha.
It was a bit of an adjustment to say the least, but it’s one of those things that after I did it I was so mad I didn’t do it sooner. I am one of those people that just don’t deal well with change. Something as simple as switching grips is such a mindfuck lol.

I know what you mean. Is the pain and struggle of producing a epic video part worth it for you? Knocked out cold on backwards decade one time I remember you saying..
Yeah, I learned my lesson on that one. Or so I thought anyways. sometimes I get stupid and I try and just pull something without really taking the steps to learn it. I usually get hurt doing that. I wrecked my ankle really bad last year trying to get a dumb trick on this video. Now I have to get surgery so I hope I learned my lesson lol.

Yeah of course cause you are killing the momentum, jumping to one foot, as opposed to two foot landing, you are dedicated to pushing flatland forward, what flat needs..

One thought on “Flat chat with Cory Fester (Part One)”