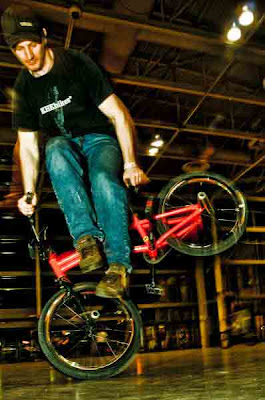 Trick you got hurt on the bike flip bunny hop?
Yea, maybe haha.
or is that hush..
No. I am just not sure if I want to try that again. I got pretty close so well see. -Haha of course. I hate getting hurt just like anybody, but that’s just part of it.

You will Cory, I know what you are like haha,you cant let it go!
Yeah maybe I will get pissed one day and lock myself in the tennis court and throw the key over, and go till I get it lol.

How does that compare with Contest riding?
Contests are just a totally different side of riding. I think one thing that people don’t see right away is that there are so many subtle things that can make a semi difficult trick super hard. Like instead of having both feet on and doing a pivot style jump you do it off one leg only. It looks like the same trick but jumping off one leg is 10 times harder.

Yeah of course cause you are killing the momentum, jumping to one foot, as opposed to two foot landing.Dedicated to pushing flatland forward, what flat needs..

Is that soundtrack from that video part the one you bought in Hungary at the Gypsy games?
Haha no that’s just a song I really like. It wont be the one, that’s in the video. It’s actually a song by Ravi Shanker. I don’t understand a word of it, but its such beautiful sounds. Kind of like watching flatland sometimes. It can still be awesome even if you don’t understand it.

I like it. But I also listen to Alanis Morrisette so ………..

Different taste in music that’s fine, not many people ride like you, its refreshing to see, Canada has always brought out crazy flatlanders..I think about Nathan, Rigby, yourself, Chase, Jason Brown, Steve Roy…I could go on, Faris..
Yeah, I miss that guy.

I remember he and Martti had a great rivalry, the Worlds in Portugal sticks in my mind, practise was unreal, they pushed each other so much…

I see lot of similarities with yourself and Andrew, no holds barred approach to riding..
Ha-ha. Yeah I think Andrew could have been in the same level as Martti had he kept riding. It’s hard though. As you get older life just kind of starts to take over. Personally I don’t think it was riding that burned Andrew out it was the lifestyle he had to live in order to stay on top.

He was partying more and more towards the end, he was wasted at the Worlds in Madrid, think it was on a Props or something.
Yeah he likes his drinking ha-ha…

When I was competing against him, he was one of only guys I was totally in awe of you know, epic stuff he did.
Yeah, he was so ahead of his time. Funny how he did all that whopper stuff years ago that is so trendy now,condensing his links down to no filler.

Whopper combos yeah, I liked his stuff before he got almost taken over with the whopper stuff.

Whoppers are the new hitchhiker. Yeah, I remember learning his barflips in the hang 5. I had stitches cause of that trick..

I’m sick of seeing them to the frame, got a bit milked these days..

Yeah, I don’t pay to much attention to the popular switches. I try and stay away from anything that becomes the newest coolest thing..

You’ve already done it Cory, saw that tucked away on bonus of HTCS haha..
Haha yeah that was a great day. I pulled that right after I pulled the last link in my section. felt on cloud nine that day.

Can you do a forwards half packer? haha, tell me about that story, that makes me laugh..
Haha yeah I forget who asked me that in Myrtle Beach. He was serious though. Sometimes I wonder if people really think that.

To me that proves a lot of people don’t understand what the hell you are doing. ah he just goes backwards, you know what i mean… Well I guess they see you go forwards in this next video haha.

Yeah, I don’t know. I think people would be surprised at how much I can do in a game of pig.

Yeah i bet, have you seen the berrics?I wonder if that would work in flat, could be awesome.

What’s the berrics?
It’s a website where they have this massive game of skate, each week different battle, it’s all over now, was amazing concept.

I think we should have video sections like that. That would be cool. I have a few people I would love to do that with. Didn’t they do that in skateboarding?

Yeah they did Rodney Mullen vs Daewkon Song, really good video, where they both went on a personal mission to push each other. That would definitely work in flatland.

Yeah, that’s the one. I definitely wanna do that just not against Marrti or Simon lol

I can imagine Justin has stupid amount of tricks.
Haha people have no idea. That guy is unbelievable, one of my favourite riders and people for that matter.

Yeah I remember us drunk at the masters, Justin was getting on it!! Haha, you turned up next day green haha..I remember buying that crate of beers with Justin, I think there were 20 beers, and Justin went back for another 20 haha. Those 40 beers were gone in an hour of watching spine mini. Mad times, he was on fire!
Oh man that was the worst shape I ever was in. I spent the whole night throwing up in Justin’s hotel room.

That was a good night, Sam legged it haha..
Yeah, he owes us a good drinking session.
That’s a sight to see I tell you Cory haha

Haha I can imagine..
Sam rules.

We were talking about contest riders the other day, and pretty much agreed that Justin is the best contest rider of all time.
Yeah, he’s up there for sure. Martti when he was winning the x-games is up there too.

Yeah for sure, we were talking in terms of consistency. he never messes up much, a bad run is 2 touches.
I really want to see Justin do a video section. I just cant imagine what he can do if he wanted to. And he dials such huge switches. like all those kickflip tricks,

Yeah 5 in a row everyday, one time for a camera..
We’ve talked about ideas and stuff before and some of the things he thinks of are nuts!

I really like his halfhiker kickflip to halfpacker, I was trying that before saw him do it..

Yeah that’s a tough one, but the bar up the arse is not good feeling haha. I was blown away when he dropped that with ease at the masters 07..

Haha man you should have seen him crash in Toronto. I thought he broke his arm. But he just got up and pulled the trick right after. One tough Hombre.

Do you see yourself getting more into contests again?
Maybe. depends on my life situation. If I can get a place to ride in the winter then for sure but taking off 4-5 months every year makes it pretty tough

Yeah, you losing almost half the year, you travelling this year?
Yeah, I plan on going to a few events this year. Going to jomopro in 2 weeks. Hoping I get to ride before I go, but its snowing outside right now so who knows.

That looks like being a good contest.
yeah hopefully

Man I wish people could get some perspective. especially the pros.

Sponsors must just take one look, and go “ah lets not get involved in that!”

P. R. R. (pro riders responsibility)
It’s so lame. all these pros bitch cause ams and beginners don’t show up and support the comp yet most the pros show up like unapproachable rockstars, take over the floor so the ams cant ride, win whatever money they can and head out straight to the bar after. Then post on a message board when they get home because they can’t pay their bills you know, all I read is about growing flatland. Lets get one thing straight. Getting pictures riding on an airplane isn’t growing flatland, setting up classes at your local bike shop will. If I was a sponsor I would rather see 100 ams at a comp than 500 spectators and 20 pros. I would rather see potential customers than potential advertisers. People say the street comps are so much louder. I got news for people, that’s not because its random people on the street, its the 100 young street riders in the crowd. That’s what we lack in flatland right now.

Haha I better stop there or I am going to quickly become the most unpopular pro on the planet.

Well there’s a lack of people willing to speak their true mind Cory, I agree that we need more ams, I was talking to Bobby Carter a while back about that, jams seem to be the place where pro riders engage with ams, at a contest they do not. It’s the ams buying the bikes, for the most part..

Yeah, it sucks. I guess I just feel bad for all the beginners you know. They pay to come to these events out of their own pocket and then they get treated like they are second the whole weekend. And when they cant afford to come, they get ripped on a message board by the very people they look up too. It’s pathetic.

Oh yeah I remember now you are a big Ross Smith fan, id second you on that, hes got mad skills!!
His tricks are crazy. He is Chase with brakes.

Master of feathering brakes, a very difficult technique actually..
Yeah his no footed whiplash to decade is beyond me

ever see a video with you and Ross in it?
Haha we’ll see. I know Ross is still riding but he stays pretty low key.

That’s awesome he still rides, lets finish this up Cory. We could talk for hours, its been interesting, as always talking to you. Goodluck at Jomopro!

Thanks. I will need it lol.

One thought on “Flatchat with Cory Fester (Part two)”