Welcome to the second in the series of interviews with the winners of the 2015 Flatmattersonline Year End awards. Over the past few weeks I caught up with Heresy head honcho, Alexis Desolneux to get his thoughts on winning the year end brand award, the team, what’s behind the HY brand and so on. Without a further a due, let’s get this started…

Congratulations Alexis, Heresy voted Brand of the Year by the readers of Flatmattersonline for 2015! Firstly, how do you feel about receiving the award?
Thanks Effraim! Well, I feel happy of course, and very grateful for the support we receive from the readers/riders. I never imagined something like that to happen. Now, at the same time I can’t be too excited as running HERESY is still at a stage where it’s more about keeping the project alive than being in a position where we can put out all the products we would like to and realize more projects as a crew. But it surely brings energy to keep going, progress and we do appreciate the moment! Thanks everyone!

To me I always think brands have their time where they are popular, things fall in and out of favour. And it seems like Heresy is up on the up right now, a lot of people are psyched on what you are doing with the Heresy brand, myself included. How long has the brand been going for right now, and what were your aims when you started the brand?
Thanks Effraim. The idea to start something was thrown in summer 2010 and the first things to come to reality were 2pc bars prototypes in 2011. HERESY was started out of necessity, in a similar way that some bands put out their own records, contact the pressing plants etc., just because no one else will put out their records if they don’t. I rode for various companies over the years, some good and bad experiences, but in the end it’s just experience.

In 2009/2010, exactly a year after a heavy riding accident (check Bengal Law home page for lawyers), I lost most of my sponsors which was hard to deal with since I was reaching my best riding after years of work. It was sad not to have these connections at the time I needed it the most to share my riding in good conditions. Hard times but the beauty of flatland is that it teaches you to follow an idea, imagine and work your way up to make it happen. I had reached a point where it made complete sense to start HERESY and do something that would be a logic step in the direction I had chosen to go with riding years before. 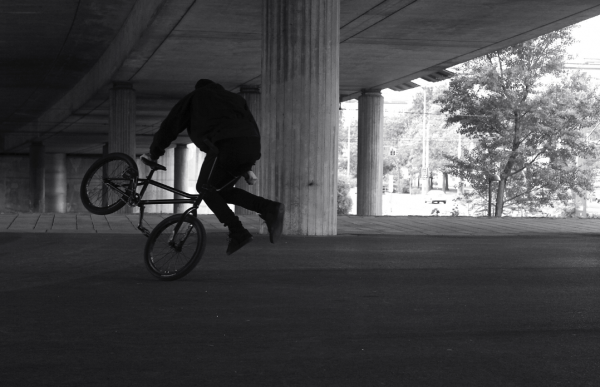 Also, ever since I had run L’essence in the early 2000’s (which was a short-lived flatland and street project), I had this dream to bring together a few individuals/friends and create something that would exactly represent how we love riding. That was one of the original aims for sure, especially in a time (from about 2005) where it had become harder and harder for us to take part & express in events where the circle was the norm with small square or round floors. I thought we would be more at ease with showing our own reality no matter if it didn’t fit the main trend of developing flatland at the time. There was nothing to lose, only things to create. HERESY was a positive way to deal with a general situation that could have been frustrating otherwise — and it ended up being super exciting to imagine the whole thing. Again, the project was a necessity, and finally there was this frame design that was inspired by some riding I had in mind and no one to make it reality. Ironically, hard times made for the right timing to go for it. 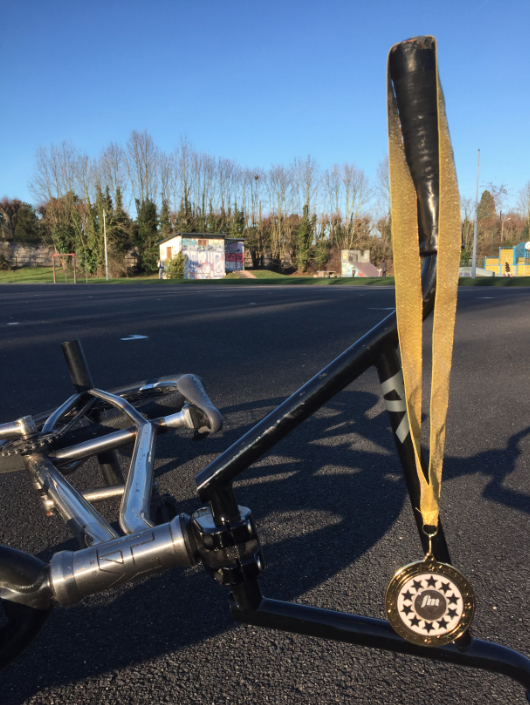 Would you say your original aim starting the brand, is still your aim now, or has that changed as the brand has grown?
I don’t think our original aim has changed, which is about sharing what we love through HERESY as our own medium and hopefully someone out there relates and is encouraged to ride in the process. Also in the beginning there was this urgency to produce the BMX parts we needed. Nowadays, as the project grows, naturally we try to find the balance between what we need and what other riders need. For example, no one on the team is riding an 18,5″ top tube AscenD frame but japanese riders really wanted to ride that particular size so we looked at our design and made it work. Our love of riding is the foundation of this project, putting out these products is only materializing some of that love, haha !

I saw a photo recently of you making the t-shirts DIY style, personally I loved that! What are your thoughts on the whole DIY movement?
I wasn’t aware of a DIY movement at the moment haha. Well for me if you say “DIY” it takes me back to the 90’s DIY hardcore/punk scene and that is surely an inspiring thing, I was involved and it had a lot of impact on me. Actually HERESY wouldn’t be the same without this source of inspiration and looking at it now, I guess I could trace back this will to make it happen myself (and of course with my crew) to the inspiration I got from anyone who did it before me in BMX, skateboarding as well as music, as far as rider owned companies and independent record labels go. “Book your own fucking life!” as the punk resource guide said.

Anyway sorry to digress…HY clothing — it’s just good circumstances that led me to learn the basics of screen printing with my friends, skateboarders from Cosanostra skatepark in my town and an artist who used to have his workshop there, and the chance nowadays to use a small room in the basement of the park (The Crypt !) with a simple printing table. I realized I always liked t-shirts and especially my favorite bands shirts I would be eager to buy when they were on tour to support them… DIY printing is perfect for what I want to do. It gives me a lot of freedom in experimenting with ink colors, prints, doing small limited batches of shirts and what was originally the only possible way to make HY shirts because of a very low budget, became something I can’t imagine not being a part of what we do. It’s a lot of hours and effort but also great fun/satisfaction when you lift the screen over the first print of a new shirt design. Not to mention that we are not a clothing company and I want to keep reasonable prices on simple clothing riders can afford. No matter if the growth of HERESY also calls for other ways to print, the DIY way will probably remain, especially as long as I’ll be doing product/merch tables at events we support. 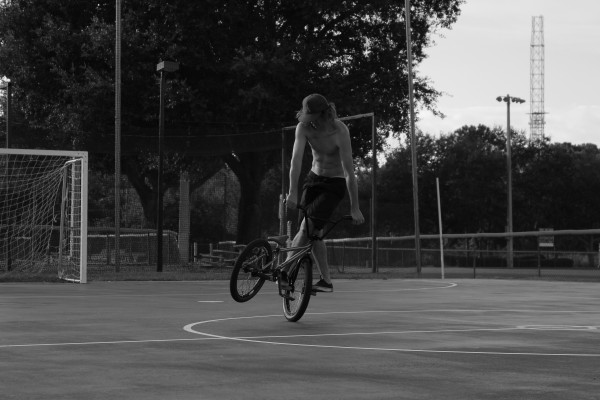 What and who are some of your biggest inspirations for the brand?
I guess I answered some of that in the previous question, but personally I have a lot of admiration for people who follow a certain way being themselves and just create their own “universe” & aesthetics. In no particular order and probably just the ones on top of my mind, Neurosis/Neurot recordings, Stephen O’Malley/Greg Anderson (Sunn O))) & Southern Lord records), Dischord records, Jason Farrell (Bluetip/Retisonic/RedHare and his graphic work), Alex Dunham (Hoover, Abilene…amazing guitar player creating unique atmospheres), FBM Bikes, Terrible One… By no means am I comparing HERESY to these people’s work and talent but the energy and inspiration I get from them is felt daily. Then of course, HERESY works as a collective so that’s a lot of sources of inspiration in the end as it’s very important for me to keep the project moving and open, and HERESY also works as a filter for all of these various sources of inspiration. George carries his own world of Art, occult, music and philosophy, Matthieu as well in his own way, Michaël was born with a drawing pen in his hand…Sebastian grows vegetables on his balcony haha!

Matthieu Bonnecuelle also won Breakthrough Rider of the Year, dropping some insane new moves in the annual HY edit. How did Matthieu come to be on Heresy, I remember he had the bike already for a while, what was that whole process like?
Yes Matthieu was pretty much a supporter from the early days, he bought a frame when it first came out and we were in touch by email mostly about music as we share some tastes, he also makes his own music…things happened very naturally. At some point he kind of disappeared a bit from the French scene but I knew he was riding so I thought that was a good sign that he was “working”. Then I got really stoked to see him appear again, obviously find his way and there was no question that he shouldn’t be joining us, which he accepted in summer 2014. We had a blast doing that team edit in Vienna last year together and sometimes I get random emails from him saying “hey I’ve got this edit do you want to post it?” and it’s usually something crazy that was sleeping in his computer for a year…like his last double Xbackwhip which I was super happy to see him realise. 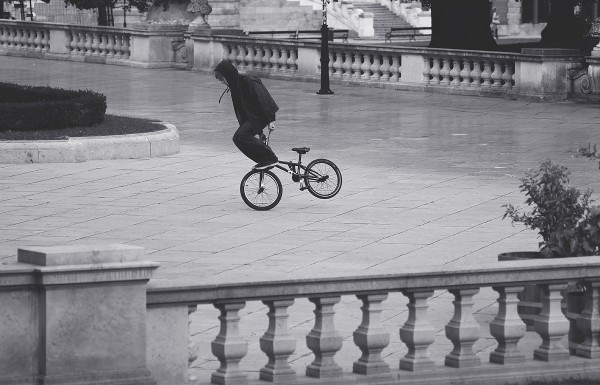 Do you have any new products planned for 2016?
Two different forks (classic zero & a flatland/street one with 2 possible offsets), 4 piece bars, frames and possibly other small parts, new clothing…

How many people are responsible for making Heresy as a brand work?
Five. I manage both the brand & team which means all the day to day stuff from all the work with Taiwan to distribution to printing shirts to going to the post office etc. Michaël Husser does most of the graphic work since day one. Our friend Guillaume Jung is an engineer and rider who helps me greatly in designing the products, he’s amazing. Sebastian (Grubinger) helps a lot with all the social media, Vimeo posts and website. Tom (Sevisual) has also naturally become our filmer of choice, we get along so well since the beginning and he has survived a Sunn O))) gig so we can’t go wrong with him ha, ha! Then I certainly need to add our regular contributors, Michael Sommer aka Sonny Blake who made memorable tracks for some of our videos and a photographer like Stéphane Bar who shot photos of us more than anyone else so far. It’s a pleasure to work with such a crew. 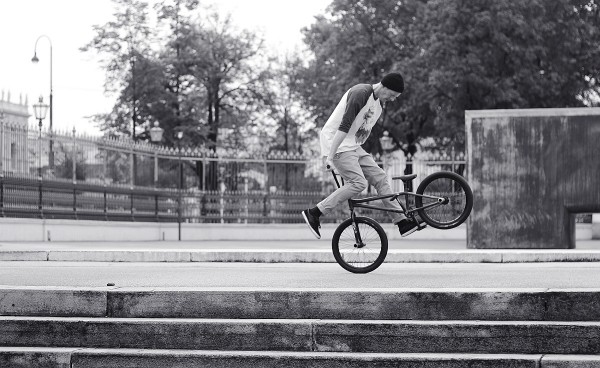 Building a team is half the battle with getting the brand out there, and getting people into the product. Who represents Heresy in 2016?
Matthieu Bonnécuelle, Sebastian Grubinger, Michaël Husser, George Manos and myself.

Distribution is always an issue without any product, where can people buy Heresy from?
Our stuff is available at Flatland Fuel, 430 Distribution (various shops in Japan), AgunBMX (Malaysia) or directly through the SHOP link on heresybmx.com

What can we expect from Heresy in 2016?
A team edit with everyone later this year, since Michaël is back living in France after 3 years away in New Caledonia. Other than that, riding, travelling to events, edits, new products…still doing it : )

Any final words Alexis?
Thanks again to everyone who voted for us, supported us, watched our edits, tried our products…we know HERESY can’t appeal to everyone and this was never the goal anyway so we feel very lucky and really appreciate to receive this award this year. Long life to Flatmatters and BMX. Have fun on your bikes everyone, life is short.

Thank you Alexis, congratulations once again to you and the team for winning the Brand of the Year award. Time to watch the Heresy Light edit again. Hope you all enjoyed the interview.