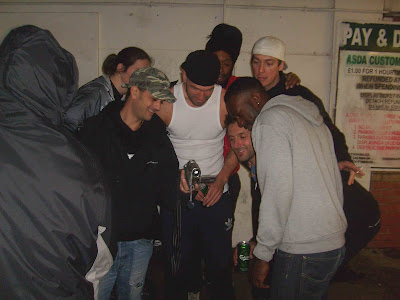 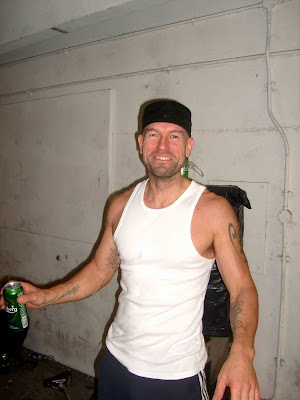 Whitey’s birthday jam was a timely reminder to all present as to what riding is all about, especially here in the UK.

“Making the best of a crap situation”…
So here we were in the corner of an Asda car park, waiting to see if the rain would stop. It didn’t till much later.
It seems to be written that it rains at everything we have organised outside this year, but yet we have fought past the barrier, riding in the rain, and on this day cold tempertures as well.
Part of the day was spent sessioning the corner of Asda waiting for James to arrive.
Most of you will have seen Mario’s web edit with riding from all who attended. But what you wont have seen was the banter and enthusiasm between all pushing James to pull his first whopper.
“Come on, I want it today!!!”
“Effraim, give me some shit, I need to be pushed to get this done, otherwise I wont do it, it’s been 2 years” was something along the lines of what Whitey said to me.
“Ok, well that tricks as old as you James come on”.
Amongest other tongue in cheek lines from everyone.
As James went over and over,  in reality it was prob 20 minutes, first in his vest top, then no shirt, he meant business!
Boom!
Couple of tries later, and countless heckles later, his first whopper was born. It was a beautiful moment in the history of UK flat, seeing how stoked James was at the age of 38, to land the whopper was another welcome reminder as to what flatland riding is all about.
Just the feeling of  pulling a trick you’ve wanted for so long, finally getting it done.
I found it very inspiring, and I know everyone there did.
Everyone cranked open the beers, great end to a miserable rainy November day.
Much respect to James!
Thanks to all the TGM/London heads, Phil D, Lee Wilson, and everyone else who made the effort in making it down to Whitey’s for a day to live in the memories forever.