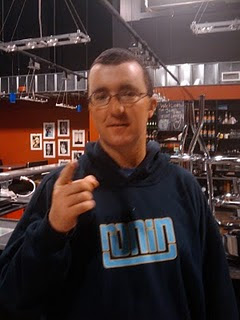 Alright lil update on whats going on at the jomopro contest, I flew out on Tuesday, met up with Ucchie and Bobby Downing, who kindly gave us both a lift to Joplin, Missouri, on the way we got pulled over by the cops just to add to the fun. The last two days been hanging out and riding a lot with Ucchie, filmed a nice exclusive clip with ucchie which will be going up next week.

The autumn ramp park where the Jomopro contest is at really makes no sense, the park is so awesome in the middle of nowhere, its funded by donations and lots of volunteers, lots of young kids riding which is great for the future, the street set up is insane, the flatland area is in the music gig section “the foundry”, the floor is a bit slippery, but Pat Schoolen is doing his best with the buffer machine, cleaning the floor every few hours. Theres already a lot of riders in attendance, really good session went down last night, lot of older riders in attendance which is great to see!!, I filmed some stuff with Rad Dad, im still jetlagged, but Ucchie is out of it and falls asleep anywhere, but still killing it as you’d expect. I’ll keep you all posted, with results, and when I return home, i’ll work on a repo, plus those exclusive videos will be posted.

Last but not least id just to say Rad Dad rules, one of the best guys in flatland hands down! More power to him!

3 thoughts on “Lil update from Jomopro”