I was honoured to be asked to judge Round 2 of the World Circuit in Barcelona, Spain at the Extreme Barcelona event in the Parc del Forum. Barcelona is one of the best cities in the world, amazing weather, culture, spots everywhere, laidback way of life, what more could you want… 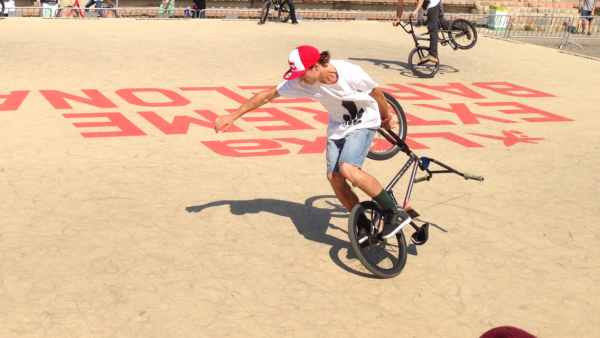 I arrived on the Friday evening, Viki’s girlfriend Alexa picked myself and Matthias Dandois from the airport. The first thing I noticed when we arrived at the contest site, holy shit the FMX jump goes directly over the top of the flatland area. Everyone was riding getting used to the area, no FMX riders around, as soon as I go to put bike together, my bars almost get run over as one of the FMX riders comes cruising past, quickly the flatland session was interrupted as the FMX riders session, and they were good too. No foot can-can backflips across the gap with ease, but still the moto whips were the most impressive for me. It turns out the flatland area was right by one of the infamous walls thats on just about everyones street video parts, myself, James McGraw and James White had a lil’ session on the walls, it seemed like the challenge was to go over the door gap. On video it doesn’t look that bad, in person it is a beast and a tight gap to get to. We talked about this all weekend, did anyone do it? 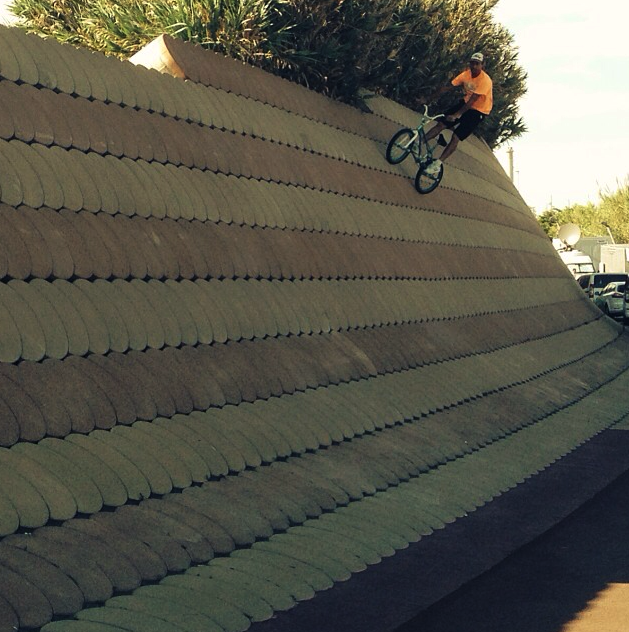 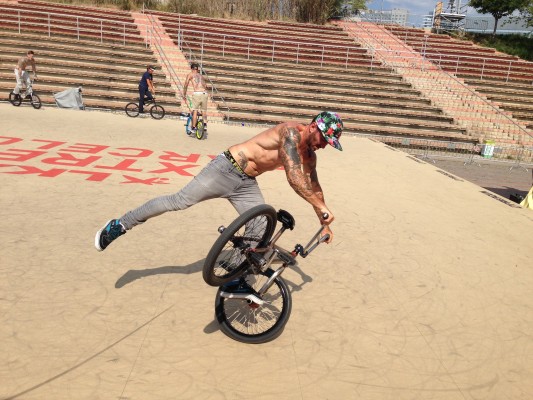 The friday evening ended with everyone grabbing free pizza and beer at the athlete catering tent, this event was dialled! I immediately thought that an event like this could easily hold the worlds, everything is here. We hung out for a bit then decided to go get some rest for a busy day ahead tomorrow.

The metro system works like a treat in Barcelona, as long as not peak times, you can freely take bikes on the underground. Our hostel was 3/4 miles away so we headed back via the underground as James White had stripped his crank axle (all weekend a bar end was all that was holding one side of the cranks on!)

Saturday rolls around and we take the short trip from hostel to the underground to get down to the contest site, the weather is amazing, maybe a lil windy but you can’t have everything.

The judging area was nicely shaded to begin with, a long day was ahead. Viki Gomez organised the contest, and went for a Qualifying, Quarter/Semi Final and Top 3 final battle system. Two and half minutes per rider, until the last battle which ran on a one minute each rider format. It was hot, so it literally was survival of the fittest. 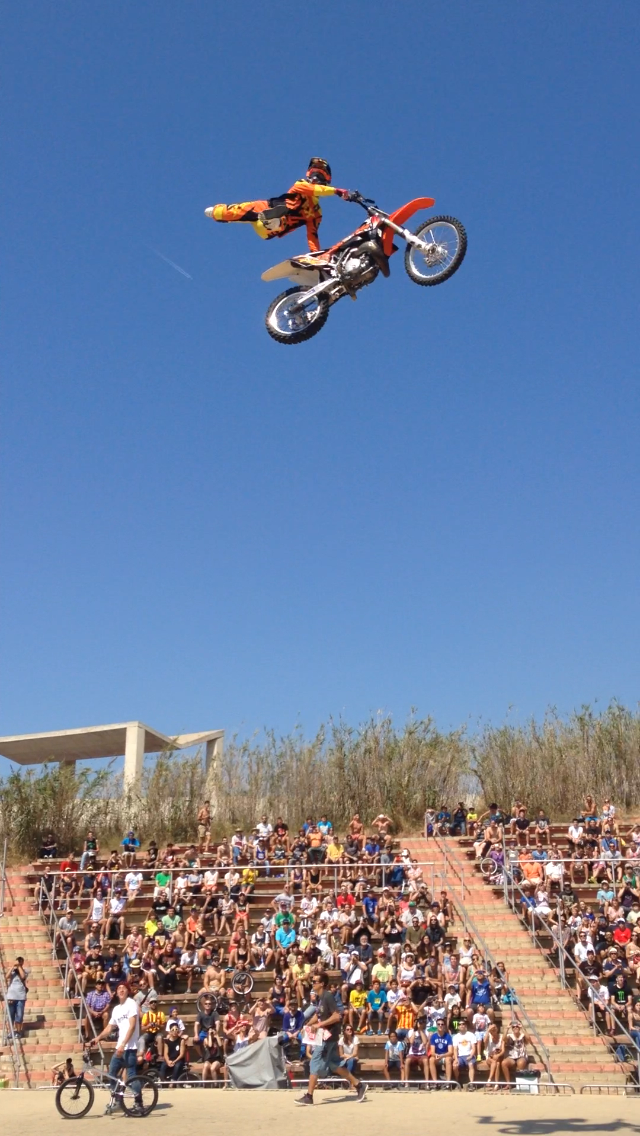 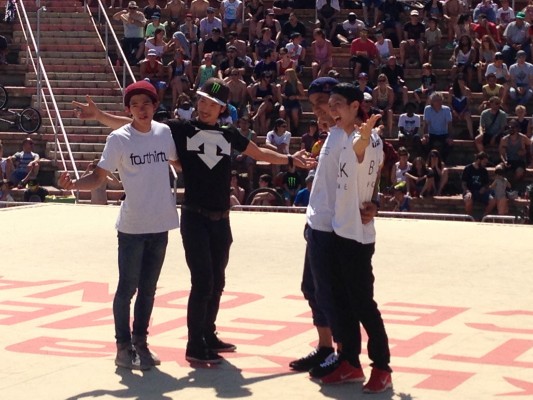 Japan in the house, much respect to these riders making the long trip to BCN.

Judging Scores were recorded live onto a iPad, which directly went out for the audience and for Spanish TV who covered the whole event.

We had four judges in place, Mike S was scheduled to be the fifth judge but couldn’t make it for personal reasons. So the judges were myself (Judging Degree of Difficulty/Originality as Mike couldn’t be there), Alexis Desolenux (Style, flow, artistic vision), Ike Guerrero (Variety)
and Matthias Dandois (Consistency).

Alex Jumelin came out swinging in the opening qualifying round taking the spot nailing pretty much everything he tried and definitely setting the standard for the event, Viki Gomez was closely behind also having an amazing run. The real surprise was Dominik Nekolny was way down in tenth place after having a bad run, I am not used to seeing Dom having a bad run ever! Check the results below for all the placings. So the Top 12 went through to a quarter final stage which would filter down to Top 6 then Top 3. The heat grew both in the riding, and in the sunshine which quickly worked it’s way to our nicely shaded area, and even with suncream I was getting burnt.

Going into the Quarter finals stage, Dominik Nekolny went up several gears, changing up his run but also lacing pretty much everything, and everyone knows his degree of difficulty is sky high, the real surprise in the quarters was Alex Jumelin who qualified first dropping out of the top 6 just missing out in the seventh spot.

The semi final got started with Moto Sasaki laying down a flawless run in the spanish sunshine. Maintaining your concentration throughout this contest was tough looking, with the heat, and the amount of time the contest lasted for. Not to mention right before semis started an FMX show. Viki Gomez did perhaps the most variety of the whole day, changing his tricks round for round, but sadly too many touches kept him out of the final 3 battle. Alberto Moya has really come of age since the last time I saw him in Southsea, all day Moya killed the contest, laying down really nice one foot cliff turbine backwards cliff pivot forwards cliff and so on. Great to see Moya do his thing on Spanish soil and a well earned fifth place. Takahiro Ikeda was the biggest showman of the day, the crowd loved his no handed time machine no handed ride out, just narrowly missing the top 3 spot. The top 3 was you already know consisted of two japanese riders, Yohei Uchino whose bike turned up the morning of the contest, Ucchie threw down his signature two footed upside down ice cream jump out to pedals plus his other signature back wheel combos for a spot in the final along with Moto as I said previously rode flawless.
Dominik was the last rider, and threw down his best run of the day. Not missing a beat, unbelievable consistency.

The event had the feel of the X Games, with the scores going live and riders not allowed to start until Tv was ready.

The final battle changed format from the previous rounds of 2.5 minute runs, and used a 3 x 1 minute run each battle format. As we all know Dominik took the win nailing his first two runs totally clean, amazing to see his consistency on some of the hardest moves in person! Ucchie nailed his inside gliding switch b to Ucchie flip in his final run to take the second spot followed by Moto Sasaki!

It was a great end to an exhausting day judging in the hot spanish sunshine, congratulations to Dominik Nekolny once again for taking the win at Round 2 of the World Circuit.

It was a blast being back in Barcelona, bringing back plenty of memories of my competing days at the Euro X there. Big ups to Viki Gomez and his girlfriend Alexa who did a great job with all the behind the scenes details that go towards making a great contest!

Can someone steal the horn though next time, my ears were ringing for a day after that hahaha.

After a full day saturday, Sunday was a nice day of riding at various spots along the windy coastline, and hitting up our favourite cafe close to the site, with much amusement at his homeless lady who got bent out of shape over James’ “No, no, no” comment as you asked for money…

Barcelona was a blast! In a few weeks time, it’s the BMX Cologne event, see you there!