When asked viewers their favourite articles from the last year, this interview with Dan Rigby was mentioned a few times, so here it s one more time… 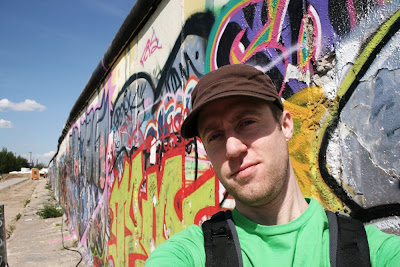 What are you up to these days Dan? Are you still riding? I know you had pretty bad knee injury…
I’m living with my wife in Calgary, Alberta working for a small design firm doing interactive design and yes I’m still riding when I can. Mostly snowboarding on weekends right now since it’s winter but come spring I’ll be back on the bike.
I had a bad knee injury in 2002 and was out for 3 months. I did physio but never really got it taken care of properly. I injured my MCL and most likely my ACL as well. It was strong for the most part but I had a few minor incidents after that. Then I went back to school in 2004 and started working a desk job after that.
I was still riding but definitely not in the best shape. A few years passed, I was out riding one evening doing some whiplash combo really fast and got tangled up and finished my knee off. Complete ACL tear and MCL damage. In Jan 2007 I got surgery for both ACL and MCL and started the 6 months physio recovery. Now I’m all good. This last summer was the first full summer of riding in a couple years. I even learned a couple new tricks! 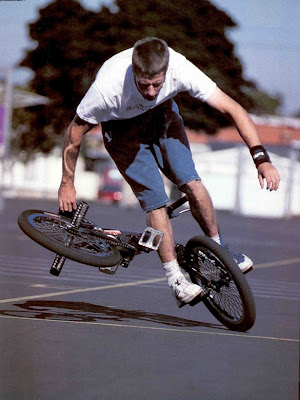 Your section on Props Groundworks is one the best of all time for sure, what do you remember about that time period of your riding? Wasn’t it at that time you were renting a warehouse with Andrew Faris?
Wow! thanks. That means a lot to hear that. I never really liked the song props chose for it but i was really happy with how the section turned out. I was just happy to be a part of that project.
That was a really good time for me in my riding guess. I was living with Andrew Faris the winter before that one and we rented a warehouse for 5 months. We both wanted to have a regular spot to ride for the winter and the warehouse just made sense. There was a lot of great riding that went down in there. Andrew came up with all his tailwhip stuff then and a lot of the tricks I did for groundworks started then too. After the winter, Andrew moved back to Vancouver and I ended up working in a grocery warehouse and saved enough money to go to California for the next winter. I had been talking to Andrew Arroyo a bit and he said he had room at his place so I packed everything I had in my car and headed south to the San Francisco area (Walnut Creek). Kerry Gatt was living there at the time too, working for Drew at his shop. It was probably one of the best winters of riding I’ve ever had and it had a huge influence on me both riding and personally. The weather that year was awesome. I rode almost everyday with Kerry, Drew, and/or Ross Smith. Of course Mutt was around too. That winter Kerry and I got a call from Chris Rye and he said they were doing this flatland only video and asked if we both wanted to do something for it. Kerry didn’t have any tricks ready so I met up with Chris in Huntington Beach on my own and we filmed the part in about 4 days. 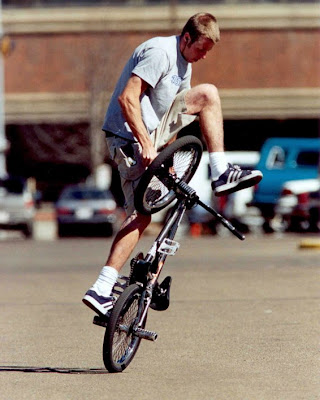 Was it around that time you started doing the 360 bike pivots on the back wheel that are your section/bonus section on the ten pack DVD? Those pivots seem to take your riding in a whole new direction.
I think I started playing around with that a year or so later on my 2nd winter with Kerry and Drew. Then kept trying variations over the next couple years or so. I was trying to link them into different combos, forwards, backwards. Just thinking of different ways to link tricks on the back wheel. I always try to have a good balance of front and back wheel tricks.

You always did well competing in the big contests, (Metro, X-trials, X games etc), do you miss competing at all?
Yes and no. I miss the traveling and meeting new people and the experience. There was a lot of great stories I have from those times and amazing places i was able to see. But i don’t miss the stress of trying to make some money so I could pay some bills or practicing the same tricks all the time or worrying about how I’m gonna get somewhere or places to stay. That’s all part of the fun too but after awhile it just gets old.
I think the whole flatland scene was starting to bum me out a bit too. Partly the contests but also what was happening to flatland itself. At the time I dropped out of the contest circuit, there was a certain style and approach that I wasn’t really into. Not just a riding style but an elitist attitude towards really keeping flatland separate from the rest of bmx too. Flatland is unique and deserves respect on it’s own level but also as part of the bmx community. I agree with it being separate to an extent but that can also be harmful. More can be done as a community. There were also some people that just ended up behaving like spoiled brats. Being rude to contest organizers just because the flatland area wasn’t perfect or flatland deserves this and that. Deal with it!! Vert riders deal with shitty ramps too. Be appreciative and work with the organizers. There were people that went out on a limb to do flat only contest or to include flatland in their comps out of respect and they didn’t the respect in return from riders.
There was a lot of shit talking that bummed me out too. Some of the flatland forums online just got out of hand with rumors and little kids that talked crap about everyone. I never paid direct attention to that stuff but when I’d meet up with some local kids or meet someone traveling, they had heard some story or rumor about me or someone I rode with. It’s stupid. It’s just bad for the sport. 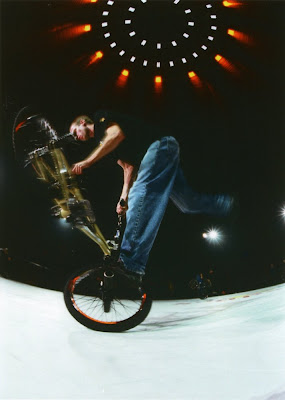 Did your riding style change when you stopped competing?
For sure. I stopped doing set links over and over again. I got way more inconsistent. haha. I just started doing links until I pulled them once then moved on. Some stuff I would practice til it was semi consistent or for a video. Other things were just to see if I could do it. I wish I would have filmed some more of that stuff but whatever. There are some days where I go to the parking lot and just do goofy tricks or rollbacks and whiplashes. I think riding kinda just went back to be just for fun again. It’s cliché’ to say it but it’s true.
I also started riding a bit of street and ramps again as well. That contributed to my initial knee injury. I’ve always ridden street and ramps a bit but some days I just was bored with flatland or wanted a change of pace. Basically I just like riding bikes. Even just going out jumping curbs is fun. There is so much good street stuff where I live now.

This is a tough to narrow down to just five:
Kevin Jones
Chase Gouin
Chad Degroot
Steve Roy
Andrew Arroyo

What bike set up are you running these days?
My bike is kinda dated by today’s standards, but I like it:

I’d like to do some upgrades this year maybe. We’ll see what happens.

Do you keep an eye on what’s going on in flatland these days?
Sorta but not really. I still have my subscription to Dig, pick magazines at the bookstore and pay attention to some stuff on the web but I’m really pretty out of the loop. I see some videos from time to time and there is some amazing riding going on. I still look out for stuff from a lot of the older pro’s who ride that I’m familiar with and whose style i like.
I’d like to get involved with flatland and bmx again a bit on the industry side. Just to keep that connection and contribute in some way. It’s been such a big part of my life for so long and there are so many good people.