Many years ago, when myself and Trevor Meyer were competing against each other regularly in the X trials X games days, Brian Tunney wrote on the ESPN site, I was the “English Trevor Meyer”, some may see this as a negative, but I saw it as a huge compliment. Whenever I think about riders with skills, Trevor’s name comes up, I always admired the way he didn’t follow any kind of fashion, he did things for himself, like the big bars, longer toptube frames, not to mention, the man was a machine, infact it looks like he still is! Somehow I think for the most part Trevor is underrated, of course because Trevor was so dominant during the 90’s he received a ton of criticism. The 90’s was a very creative period, now hes off the radar so to speak, it seems people have warmed to him, I guess this shows the fical nature of being at the top of your sport.
Without further a due, I bring you the Trevor Meyer interview, this has been a while in the works, I hope you enjoy it! 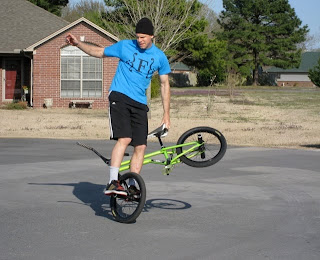 Just for the record Trevor, how old are you and how long have you been riding?
37 years old,been riding about 25 years but that includes alot of messing around not just flatland.

What got you into flatland riding?
I happened to pick up the very first issue of FREESTYLIN magazine at my local convenience store. After checking out all the cool bikes and tricks it just seemed like something i wanted to do! Went to the Haro trick team show when they came to town-(Nourie,Blyther & Wilkerson) and afterwards bought my first real freestyle bike a GT Performer and started riding.

When you started out riding who did you look up to?
I looked up to all the Pros and experts out there,i still do! Old school or new school i respect anyone that can ride! Dennis McCoy,Rick Moliterno,RL Osborn were a few favorites.

How long were you riding before you went pro?
About 5 years,my first pro contest was held in 1992. It was a Hoffman B.S. series contest located at Lake Owen camp,Wisconsin,USA. Ended up winning that one and eventually started going to all the B.S. contests at the time.

Give me a brief run down of your sponsorship history?Started off with Standard,Wilkerson Airlines,GT/Powerlite/Dyno,Mongoose, Giant those were the big ones! I do want to thank Odyssey for helping me out all along-they rule!

Sorry to ask this as I would imagine you are sick of it…..I know you looked up to Chase Gouin a lot, and in a way learnt off the master, you also recieved lot of criticism from him, and many others, how did you feel about that, can you recall that time, and spread some light from your perspective?
Im long over that stuff now.But if you ask me, I think Chase should have taken it as a compliment to his riding rather than a negative thing. I know,I would be honored if other riders did my tricks and wanted to be like me! 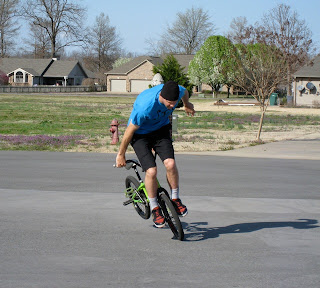 You are well known by the whole sport as being one of the most consistent contest riders of all time? Can you tell me a little bit about your contest preparations? How did you get so dialed, like what process did you go through?
Didn’t really go thru a process or anything, i just put a lot of time into riding and trying the same tricks/combos over and over until I got them!This sport also requires mental preparation.

What kind of mental preparation did you do? Thats crazy that you just rode a lot and got that dialled, without any process.
Lot’s of deep meditation. Just joking!!! I had an idea of what i wanted to do but no particular order,for some reason when i did plan to do combos in order- i would mess it up, so i just went with what felt right at the time!

A lot of times you were on the road all summer, how on earth did you progress and also be dialled during this time?
We would be on the road touring around for months then go right to a contest! I just made the best out of the free time that i had by practicing at hotels and before after demos.

I can’t believe all you did was ride trevor, with no kind of system, you must be pretty natural, would you say you were a natural rider? I always thought you had some crazy kind of practise routine…
Theres nothing natural about flatland, the way we put our body in unnatural positions. Endless hours of repetition is what matters and sometimes that doesn’t do it.The love of the sport and desire to perfect tricks is my drive.

Whats your proudest achievement within your riding career?
You might guess the 3 x-game gold medals and 7 straight years of hoffman belts.

Back when you were competing regularly, who were the riders you respected the most?
Steve Roy,Phil Dolan,Edgar Placentia,Day Smith and Kevin Jones.

And onto modern day, who are the riders that inspire you?
So many good riders out their now, here are 3 of my favorites.
Waldemar Fatkin,Youhei Uchino, Matthias Dandois.

What are you up to these days Trevor? Do you still get to ride much?
I Still do lots of demos around the USA, when your job is your sport that’s pretty cool. Ya, i ride all the time.Check out some of the vimeo video clips i have put up lately! Anyone like the cross-footed grip ride? Still progressing,i never stopped!

Tell me about show riding, did you used to practice contest combos in shows, or do easier stuff? And how has that changed now you no longer compete?
Yes, i had a mix of both easy and hard contest tricks,not much has changed i usually start off with easier tricks then work into my harder combos at the end.It depends on the surface area,we can get stuck in some pretty rough spots. 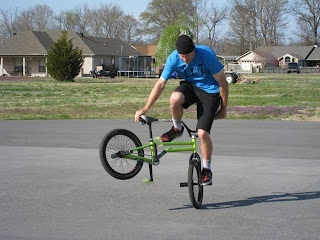 Who do you do shows for?
Bmx Pros Trick Team,owned by Woody Itson, Dennis Langlais. I also do ASA high school tour demos in the spring and fall with Jimmy Coleman(X-Game Announcer).

Describe your bike set up?
21″ custom made Sickchild metropolitan frame with a 5″headtube. Definitely one of the biggest flatland bikes out there,but thats nothing new to me, it weights in around 24lbs. Breakless. Sorry guys no more direct-drive hub,too much pedaling! Lots of Odyssey parts along with Tree Pegs,Colony stem,blusix bolts and a KHE freecoaster.

Does it amuse you that big bars are now the fashion,and you were rocking them years ago?
Yes, i’ve always been in style just never knew it, haha. I guess i get the credit for doing it first!

Just out of interest how long has it been that you’ve been riding custom flatland frames with the 21″ top tube, and what were you riding before that, i remember way back in the day you were on WAL riot.
I have always liked longer frames since I’m tall it just makes sense to ride a frame that fits my size,don’t like being cramped up on a small bike. Yes,used to ride the WAL Riot,Standard Lengthy and Powerlite all those frames were already made long but were not exactly flatland frames.Flatland bikes and parts have always catered to the shorter guys out there-not fair! Even today in 2010 a tall flatland rider could not just go out and buy a 21″ flatland frame because no one makes them yet! I had a custom Dyno Slammer made just for me, back in 1996 so its been 14 years since i have been riding custom frames.

Of all your contest winnings, you never made it over to europe or japan, ever see yourself travelling again just to ride?
Im happy just riding at home in my spot but if someone wanted to fly me to Europe or Japan to ride for fun-sure i would be into that! 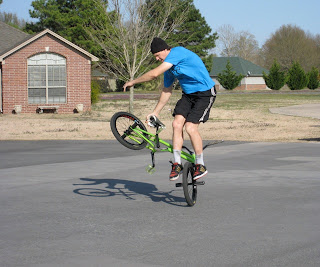 Haha good answer Trev! Im sure many riders would love to see you back on the contest circuit, you could certainly hang, ever get tempted to make a contest comeback or you over it?
You never know,if i feel like entering something i will! Its really not about the contests for me anymore,i enjoy learning new tricks and progressing at my own pace,it’s not like i need contests to push me to ride but would be fun to hang with the guys again.

I hear you trevor it would be nice to see you back on the contest scene, personally i still think you have a lot to offer the flatland world, that of course is your choice.
Are there many riders in Arkansas where you live?
We do have a small flatland scene here in Arkansas. My buddy Danny Harrison is like the representative,he knows all the riders scattered around the state and lines up sessions from time to time. Burns Park, downtown Little Rock are spots to ride on the weekends. In the summer we ride all day (in 100 degree heat, something I’m not used to) usually with a handful of riders.

Any chance of you competing at the Joplin Missouri Jomopro contest in April? Be great to see you there!
Don’t plan on competing at that one but will enjoy checking it out.

You may dig in the crates to answer this up to modern day, what tricks have you invented over the years trevor?
Oh man thats a tough question because you never know who is working on the same trick or connection on the other side of the world! Not so much the tricks but different ways to connect them or do differently,theres no way i can remember everything but here is a few.Backwards scuffing (dumptruck,funky chicken & lard yard),my own variation of how i connected the cross-footed hitchiker and flipped the wheel to backpacker,another variation is the cross footed peg wheelie to rolling backyard,no handed turbine death truck,turbine wheelchair,half hiker kickflips, steam roller 360 kick flips,pedaling dumptruck with a free coaster not direct drive,my own version of the cross-footed wheelchair and cross footed grip ride.

Any regrets riding wise over the years? Would you do anything different?
Sure everyone has regrets, no one lives a perfect life! Im not one to dwell on what i should have done in the past,just get over it and move on for bigger and better things to come!

If you had to pick a favourite “period” of flatland what would it be?
For me it was the 90s. Flatland was introduced to the X-games and that brought our underground sport to ESPN and world wide television with good prize money for the first time ever! It just seemed like their were more riders,sponsors,magazines/videos,and people into flatland back then. I remember driving thru towns and seeing kids trying tricks on their bikes,i don’t see that today! Most of our shows we did at bike shops had huge turn outs of spectators and riders,its just not like that anymore.

Any final words trevor? Thanks for taking time to do this.
Never give up! I like the Harley motto “Live to ride and Ride to live”! If your passion is flatland do it as long as you can.Thanks God and to all my fans out there! 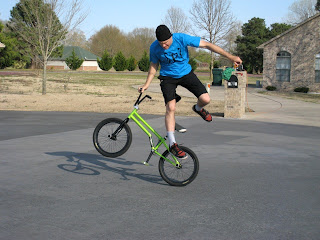