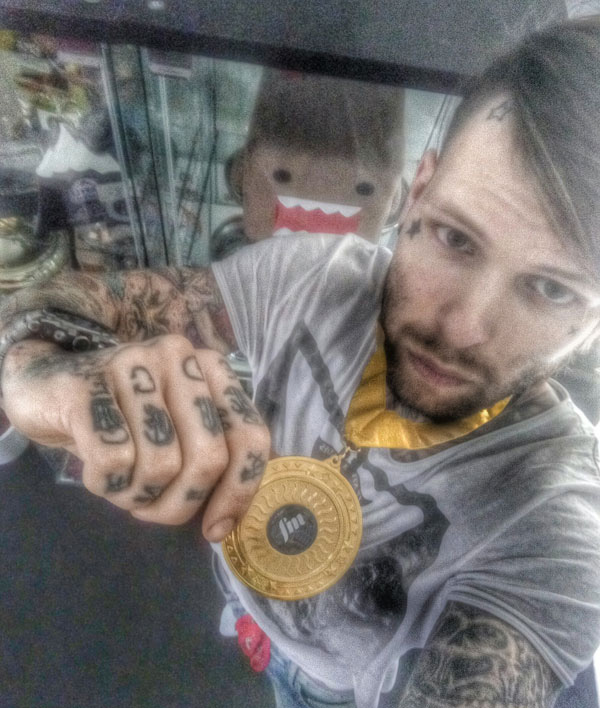 Welcome back to the second in our series of interviews with the winners in the Flatmatters Online Year End Awards 2014. Dominik Nekolny won “Contest Run of The Year” for his finals run at the BMX Cologne contest voted by you the readers of Flatmatters! I caught up with Dom to talk about his contest run, the emotions of the previous years performance, contest preparations, his plans for this year and much more, read on!

Firstly, congratulations for the award Readers Choice in the Flatmatters Online Year End Awards, Best contest run of 2014! How do you feel about winning the award Dom?
Hello Eff, first of all thank you for this interview and for this whole award thingy, cause thats big motivation for all of us.
So how do I feel? I feel pretty good, but on the other side kind of sad. Feel good, because this award was the most important for me and winning it in the twice in a row is really accomplishment for me and I can reflect that I’m moving forward. On the other hand Im sad because again only about my nomination was kind of comment like I won it cause feel sorry about me. No-one else have comment like that – apparently everyone won the award cause they deserved it but only me….Was really happy when Mates write me I won it but when I read the whole announcment I wasnt so happy anymore.

Of all your contest wins in 2014, was the BMX Cologne victory the win you hold most dearest, especially after coming so close the previous year?
To be honest I didnt feel like that about winning Worlds. And that’s just because of previous years suckness – so when I won it I was like “yeah you finally got it mooooran…”. 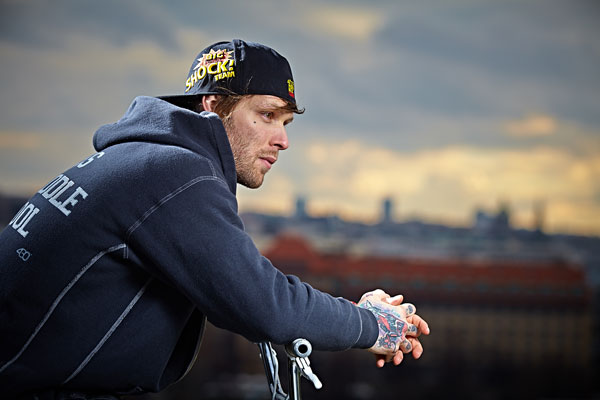 Do you think you learnt anything from the previous year in Cologne?
I learn so much every time of every failure. But also it really depends on many other aspects. And when you got the normal job, you have so much shit in your head, cause you live in two worlds – then you have so much bigger chance that something going to be wrong and you just fucked up from what ever reason. So why would I say like “yeah I didnt feel really good”, or “my leg hurt so bad” or whatever excuse, if I just simply fucked up. In my mind its still big a deal and its unacceptable to fail but it happens and I have no other way than just deal with it and keep going on my fucked up way.

In your mind, what was your best run of 2014?
Worlds was fine, but for me it was my part in the finale at Bikes Days. I just felt very good on the floor and pulled all my full links how they supposed to be pulled. So I felt really good about my performance. 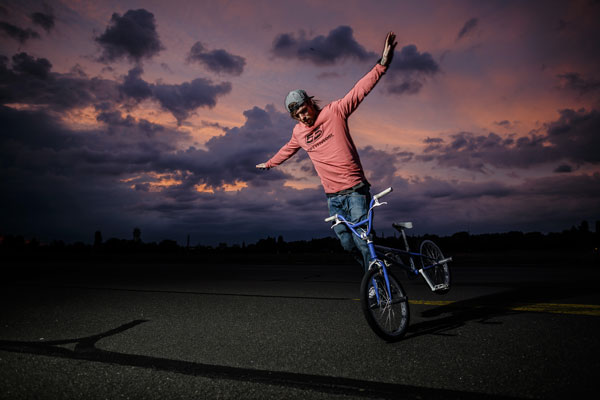 Crazy looking sky in this Plasticman shot, photo by Ikuma.

Everyone knows you train hard for contests, that is obvious by your consistency, do you train all year round or take a break from training in the off season?
It depends. Last year I almost burn out and had really hard time through the year. And the last straw was failuring floor in the club and me at the last contest of the year Battle in the Rockies – where I couldnt pull almost anything. So after that I just slowed down took a break from contest thingy. Also, I got the feeling last year that people start to be sick of me… I always heard “Why Dom win, why?” And again that’s not so much motivating… It’s really wierd – we are so small sport and there is sooooooo much fuckin hate – of course most of the time from people who doesnt even have a reason. So Im asking “Whyyyyyyyy???” I’m just trying to perform as best as I can – sometimes it works for a contest or two – but than nothing – so why so many hate. So I had to fight with this last year as well so this winter I throw away all my practice system and just ride and try to copy all of Viki’s tricks…

For you, when do you regard your combos contest ready?
It’s really hard to say. Because sometimes you do and then you fail. And next time you are not sure about it and you try it and it works – so its really hard to say… When you do short links it’s obviously easier then doing 40s link and messed up in last seconds – because then no one cares what 39ssecond link you pulled – all are only happy that you fail in last second your fucked. So about contest readiness i’m not so sure. 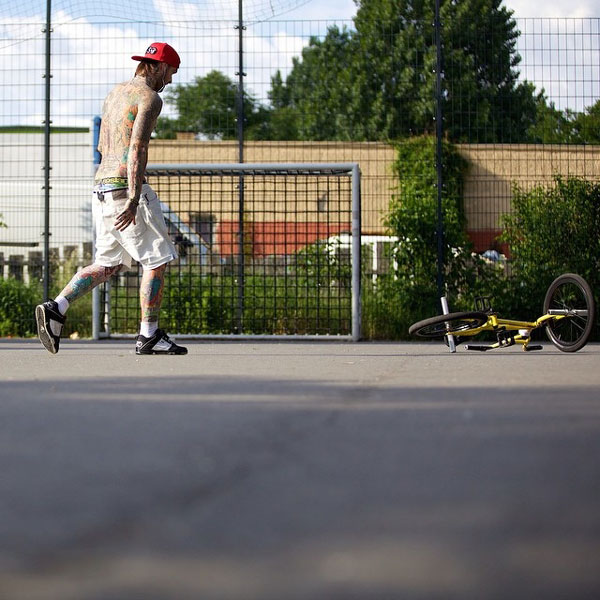 Flatland can be frustrating at times even for the Worlds best, photo by Mike S.

How much of contest riding would you say is work ethic versus mental?
Oh man dont let me start on this one…. I could write a book about this shit. I mean when are the super real pro with that thingy behind your ass, its suppose to be ok, cause your mind is free – you have no shits in your head how to pay this how to get there and so on. When you struggle and you have all this shits take a side at least when you practice its other hard work to do. Sometimes through the practice I answer to emails for lecture or a show, because people want immediately answer, call with the people, cause there is always something to check – and of course this reflects on your mental side. So I had to learn how to make it work and keep my discipline.

I noticed whatever contest you are at you pick a spot and you ride that particular spot only, explain your train of thought there?
Hahaaaa….yeah that’s true – I do that cause Im retard and I can not cross it 😉 No, it just works for me – and when you have these contests with contest floor 2×2 meters where are 678339 riders to trying to practice in the same time, I’m just trying to practice as much as possible too but I wanna respect the other riders so I try to practice on same spot as close to the edge as possible to keep the room for other riders – it’s that simple. 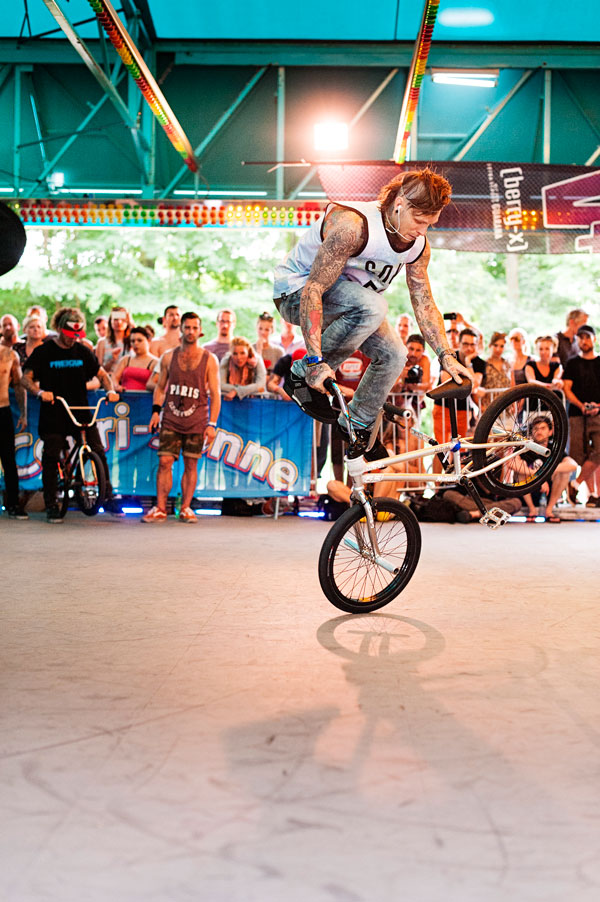 What are your plans for this year?
Actually I really dont know. But I dont have big sponsor behind my ass so actually I have to worry about my life. Nowadays almost everyone is a “pro”. But if you are “real pro” and doesnt have that thingy behind your ass, you actually have to a lot of things to do by yourself to not end up like home “pro”. And sometimes it’s just a big strugle like when you fly to some mutherfuckin’ island on the other side of the planet and some mutherfuckin organizer totally shit on your head – than the struggle gets even bigger. But if you are a pro you just have to deal with if and keep going… And how I said after last year all the contests and poisoned people and all the hate, I’m still not so sure whats going to be my plan for this year. Gonna hit the contest for sure, but still dont know when. Also was thinking about doing a edit – but some tripod shit but the real one like edits back in the days when I was starting riding – they could do it why I couldnt. Was thing as well about the split with Pete Olsen – cause his riding is fuckin awesome and badass and that’s my style. Also maybe doing a wider tire for all the riders who again ride fat tire like in ’90 – but the trend change every 5 minutes so I still dont know, yesterday was awesome 1.5″, today is the best wide 2″ and now it’s 1.5″ again. Also have to sell my D.O.M. pegs, so go to http://shop.dominiknekolny.com and buy some! Big thanks to everyone who already bought and supported me! So we will see…

Any final shoutouts Dom?
There is motherfuckin big thanks to my sponsors which support even poor guy from small country like me – so big shoutout to: Rubena (xDOMx), Autum Bikes, G-Shock, Lenovo, BigShock, Nikon, 55DSL, DVS. But its not about the sponsors its about all the support I got from all the riders, people and friends so big shoutout to my family, my friends especialy: Matti Rose, Thomas Hirsch, Chris Bohm, Michal Kupec, Patrik Ras, Michael Staingreaber, Simon Coffin, Uchi Yohei, Kevin Nikulski, James McGraw, Effraim Catlow, Magdalena Stankova, Lenka Aliapuliu, Martin Rychna, Tomas Jezek, Daniel Francle, Jiri Simanek, Jerry, Helena Barathova, and many more! Thanks to everyone who support me and motivate me and hope your gonna stick with me this year as well!