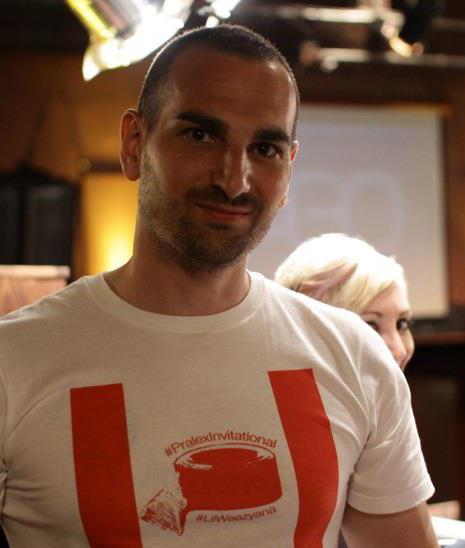 In 2010 I had the honor of meeting Joe Cicman in Toronto at a stop on the 1st year of the Am Flatland Circuit. I got to know him a little more at the finals that year in Dayton, Ohio and have considered him a good friend ever since. Joe’s passion for life and riding are unmatched in my book. Now with the 3rd year of the Am Flatland Circuit in full swing Joe has joined the #AMFLT crew and assisted on everything from the web page to posting “almost” live unedited raw contest run footage to the AMFLT YouTube page. With Round 3: Anarchy In Anderson less than a month away, I caught up with Joe for some Q&A. Enjoy. 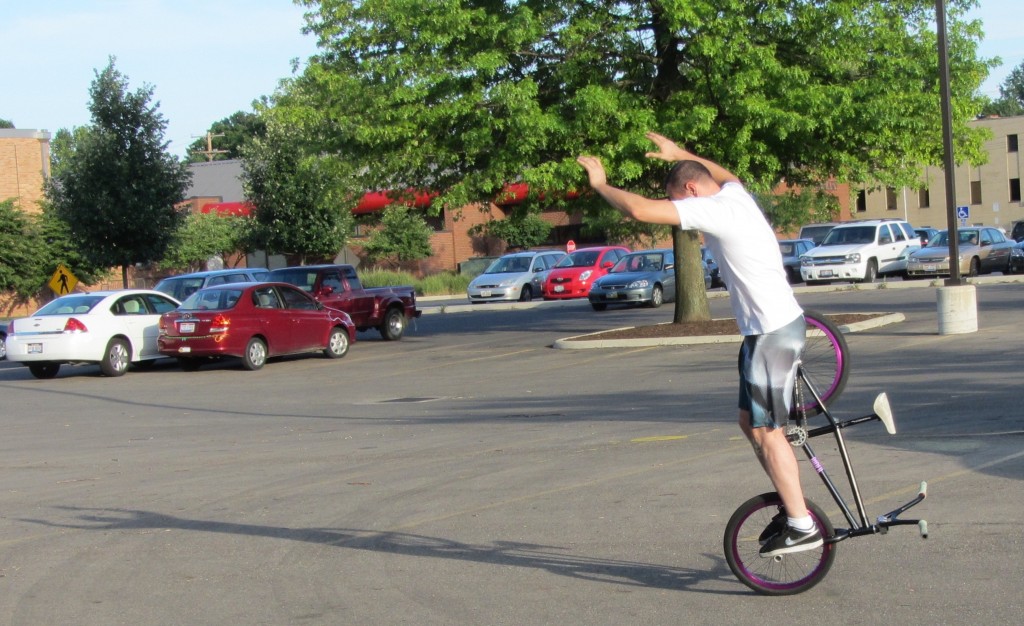 You won last years Am Flatland Circuit in the Expert Class. Now with the combination of Experts and Masters, have you noticed a difference in competition this year?
Yes. The difference is that what worked for me last year isn’t working for me this year and I’ve had to sit down and re-consider my strategy. Let me put it this way: of the 3 Masters guys who beat me in Buffalo’s round 5 last year, 2 have turned pro – and one of them I beat at that contest turned pro at Voodoo. I’m really glad I pulled the Mat Hoffman-style “win-one-class-then-move-up-at-the-same-contest” move at the finals in 2011. I needed the confidence going into this year. Another difference is that I’m facing the “consistency vs. progression” question and the consequences are very real and affecting me. I took my old run’s consistency as far as it could take me, and now the fertile ground is progression and finding a new set of bangers to contend with these really incredible riders.

Round 3 is coming up soon and with a “Best 3 scores count” point system for the circuit, each round is important. Is the pressure on?
The pressure’s always there, what makes or breaks you is how to respond to it. I’ve changed the way I think about contests and what I want to get out of them. Last year, it was all about coming back from my 20 year hiatus from competitions and re-learning how to prepare. This year, it’s more about experiencing and enjoying the community and the spirit – and then finding a balance between that and becoming a better rider.

You have been a mainstay in allevents over the last few years. What do these events mean to you?
This is a great question and I’m glad you asked it. These events are a nexus of talent that ends up producing things that other forums can’t and so it adds something enriching to the community. Jams, sessions with your local crew, road trips, casual or fully produced web edits all enrich the community as well. None of them is negligible; they all nourish the community and each feeds off the others’ contributions. But back to what these events mean to me – the events and their preparation (as well as the days following) are story-makers. I’ve gotten so many awesome experiences from these events and have so many stories and have met so many awesome people. I’m really grateful and really appreciative. Is that hard?

What are you most looking forward to seeing at Round 3? Any rider in particular?
Yes, a few. I’m really looking forward to seeing what Mark Kuhlmann does. He’s weighing a run for the AM title against his rep as a pro rider and the cash pay-out. With a *subject to change* pro purse of $1500 USD, he could walk home with like $6000 CAN. I’m also keeping my eyes focused on Prasheel and Alex. I know Josh Hansen is going to be there, and @bry_huff_purple – and the Chicago crew as well. Ron and Todd brought me to tears in Joplin, those guys are so funny. I’m hoping to score free drinks from women who want me to introduce them to our TV buddy Matt Wilhelm. And I’m looking forward to seeing my road-trip bruva R. Todd Carter come back from that broken hand. #dontCallItAComeBack. I’m praying that Jimmy Kibbons makes it out. I hope Dane makes the trek and brings Jody Temple and The Duke. Joel Schallhorn should be there too. I think Mike Smick should drive out. Rad Dad and Kelly Baldwin. I’d like to thank my producer Easy D and all the people at Foot Jam Productions (I love y’all). [shut-up music plays]

Are you feeling any added pressure knowing that your mentor and metaGuru Danny Sirkin will be there judging you?
Danny Sirkin is always judging me, so there’s no incremental pressure. I’m actually feeling very good about it because Danny calls it like he sees it. A metaGuru always sees clear truth. A metaGuru is not blinded by nepotism. As far as pressure, I’d say that there’s a great deal of pent-up excitement with him coming; he’s been busy and hasn’t read the recent posts on his SuperFan site (by which I am sponsored) since well before Voodoo. He’ll get his first taste all at once at the pre-jam. If I may divert and tell a story: In late 2010, the DannySirkinSuperFan.blogspot.com site embarked on an eCommerce initiative whereby they started listing for sale items that appeared in the pictures. There was a post with a picture by Bill Keaggy of Danny doing an old-school messiah in a unique way – no knees on the bars, and instead pinching the seat with his ass. The page listed a pink hat, a tank top, and a Thigh Master. Danny called me a day later while I was riding at The TerraDome and for about 2 minutes straight repeated himself slowly “I’m going. To shove. My fist. In your […]” After a while I calmed him down, but my eyes were all teared up and my stomach ached from laughing. To this day, I get the feeling that he didn’t entirely accept my marginally sincere apology. 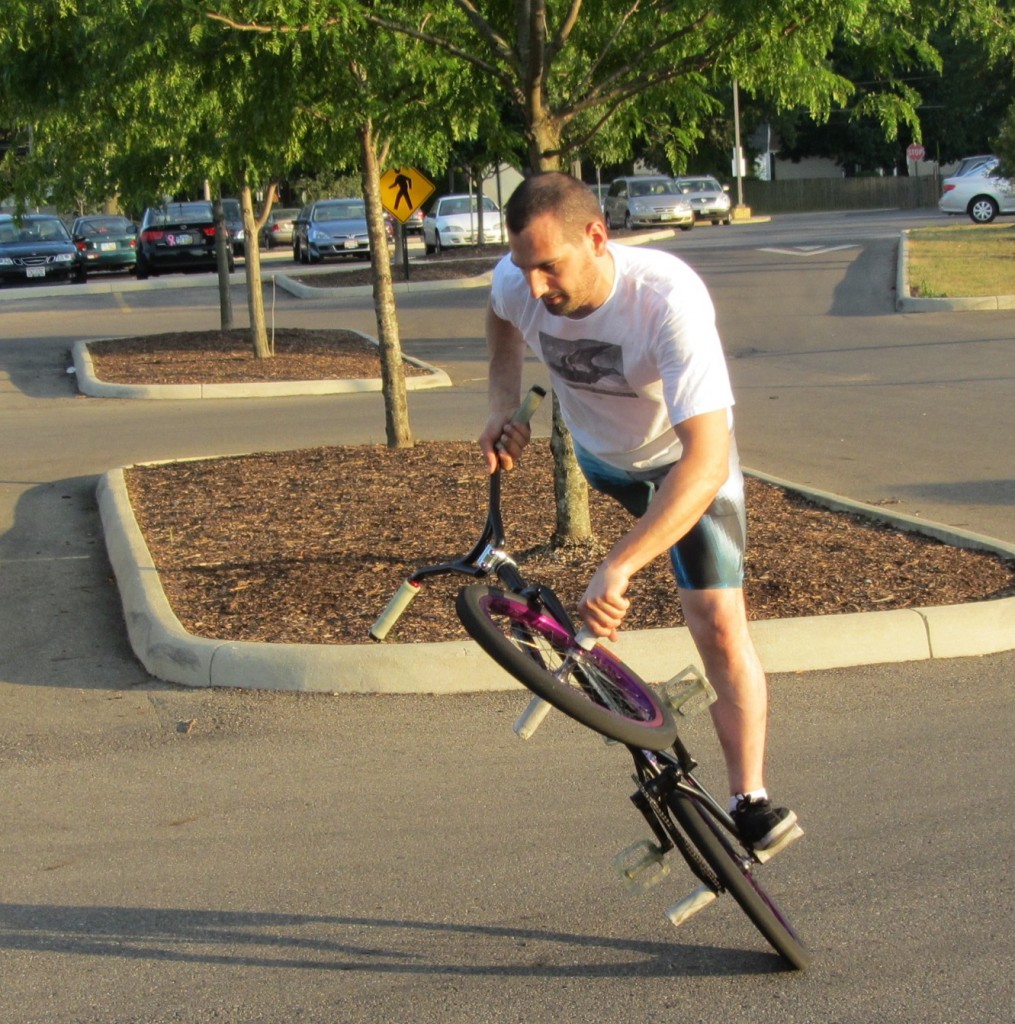 You switched from front and back brakes to brakeless after VooDoo jam. Is that hard?
It was hard. You’d think that all it was was just moving my hands differently but there’s more than that. Since about a year ago, my brakes were urking me. I only tapped them twice in my run. Then when I started jumping from crack to backyard, I only tapped them once to get out of the lard yard. But I kept them on like Linus and the security blanket as suggested in Fully-Verfied. After my run at Voodoo I knew I had to switch things up in a major way if I wanted to break out of my mindset. So, I went home and took them off. I was also riding with a crack in my frame and going gentle to make it last. So, all told: I’m riding Primo Comets, brakeless, on a Jungle Rider, and have my bars a bit forward…I think I’m going to buy new shoes too. Angie wants to advise on my outfits as well – the yoga pants didn’t really throw sparks. (Oh well, this is why we try things – to find the next better idea).

You are one of the most fun/well liked riders on the circuit. Do you feel pressured by Pralex to outdo them in the fun & hijinx category?
Thank you for saying that. It makes me feel good. Pressure to out-Pralex Pralex? Well, to tell you the truth, when I saw those guys at the finals in Dayton in 2010 I was like “These. Dudes. Rule.” and I did, in fact, so some soul-searching to figure out how to even hang with their level of hijinx. They can’t be topped, man. They’re on a pedestal. The #pralexInvitational shirts that Todd Carter and I collaborated on was a way of giving back and saying “thanks for all you guys do.” And to be honest, everyone benefits when dudes get zany and throw their hats in the ring with Pralex. It’s so funny. But let’s be clear – The Reverse Katrina is the gold standard of antics. I laugh every time I even think about that.

You have put a lot of effort and time in helping with the Am Flatland Circuit over the past two years. This year you are doing even more with supplying www.youtube.com/AMFLT with full contest coverage. How important do you feel the circuit and the coverage it gets is to flatland in North America?
The view counts on that channel went bananas after Toronto and they popped again before and after JoMo. There are a lot of people subscribing and giving the riders props in comments. Full Disclosure: This idea came directly from some TJ Perry feedback and he was right – the supply of contest footage had become balkanized. So, now we’ve got one source for circuit footage which respects the investment sponsors make when they support the production of the event. On a non-commercial front, I think it’s a great way for us to see guys like Kevin Gallien. That kid’s story (as told by the look on his face) is emblematic of what the sport of flatland does for riders’ lives. For people just starting to explore what flatland’s all about, this channel tells a compelling story of what it has to offer. My hope is that we can start doing tutorials on this site and running clinics at the contests using demo bikes from the pro’s (or local) sponsors.

Thanks for all you do on the circuit Joe! Any final words?
You’re quite welcome. And thank you for all your passion and effort to keep the ball rolling. I’d like to send a shout-out to Jm McKay for being a helluva video producer, the Newport Beach crew, the One Love Crew, the OG / ATX crew, the crew down in Orlando, the Canadia crew (Western and Eastern), the New York / tri-state crew, York (for making all of this for us), @bry_huff_purple and Fox Kinsman of the North Carolina crew, the guys from Chicago (aka Chi-town Hustlaz), my Columbus crew (Andy Johnson, Scott Nagy, Phil Brunet, Wes Borne, Joel Schallhorn, and by proxy Todd Carter), the whole of continental Europe, the Boston crew, China Krys Darrington, Pralex, Effraim and FlatmattersOnLine for tying so many of us together, the Chenga crew, and Danny Sirkin and the homies at Solon Bicycle, and “it’s so obvious that it falls into the background – Steve and the Lapsley clan for quite frankly making this happen”. A special thanks to Angie for being a super-supportive and amazing partner. “If you believe in yourself, you will know how to ride a bike. If you don’t, then you just keep practicing. You will get the hang of it I know it.”

16 thoughts on “Joe Cicman Interview – Round 3 AM Flat Hype!”