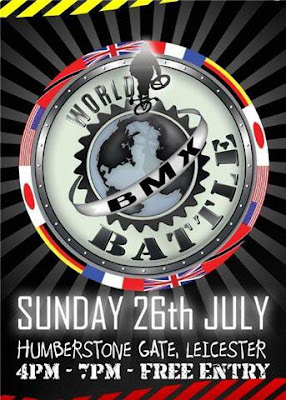 Heres the word from Keelan:
Yo, here’s the deal on the ‘world bmx battle’, it is an open contest so I want everyone to come to this!
The Saturday 25th july will be qualifying day, every rider will have their names put into a hat, for example if there is 28 riders, then the 14 that win their battle will go through to next round, the 14 left will battle each other, the winners of that round then battles the first group winner, and keep battling til we have 8 riders for the big final on sunday 26th july, so every rider will get to battle a few times!

It’s gonna be big! I wanna see every rider down here, and also there will be slightly different judging, yes we will have judges to judge the riding, but also the audience will have an influence too! mainly on the final though, so make your plans to be here!
The best airports to go to for riders coming from abroad are Nottingham, East Midlands, or Birmingham, for first choices, then there is always London.