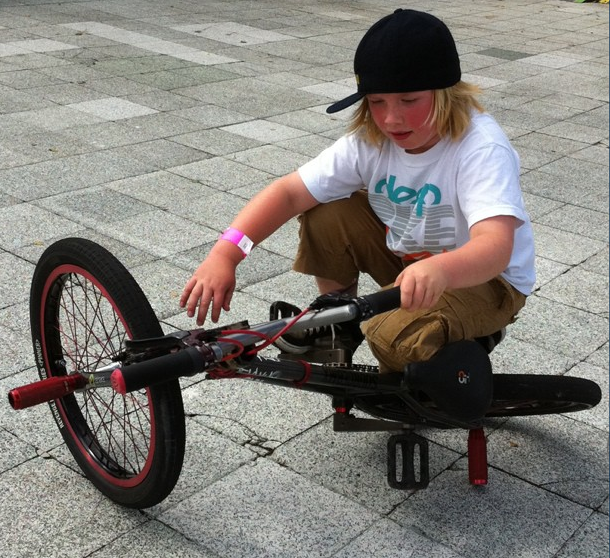 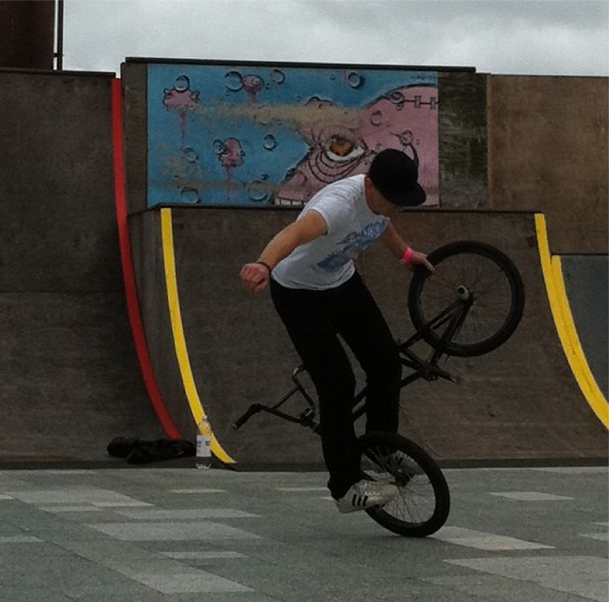 As with any event outdoors in the UK, the threat of rain rears it’s ugly head everytime, nothing is a given. With bright sunshine/or at least dry right up until the thursday since the olympics, of course sod’s law reared it’s ugly head. The forecast was terrible from the friday onwards, straight rain for 4-5 days, in summer!
This was the third year for the King of Southsea event, and by far the best year in terms for attending visiting riders, this year saw Prasheel Gopal make the trip from Toronto, Moya from Madrid, Navid Saleki who’s from Sweden but lives in Holland, Romain Georges, Thomas Legrand, Jean Michel Chauvel, and friends make the trip from Caen, France. The days leading up to the event there was such a good vibe, all you can do is keep fingers crossed for the event.
Prasheel and Moya both arrived on Thursday, we had a nice evening session, before the forecast rain hit on friday, which meant the traditional late night friday session didn’t happen, instead drinking did, Cunners stealing the friday show with the line of the weekend “Flatlanders are the worst thing about flatland”, so many good times throughout the bank holiday weekend, and like Prasheel said more than once, these are the best parts that you can’t get online, but thats another story, aoosssstttt….

After hanging out with Prasheel Gopal for close to a week, i came to the conclusion that flatland needs more people like him, the man made the effort to come here all the way from Toronto, immediately embraced the culture, got involved in the banter, and after a day I truly felt like he was part of the UK scene. He works a 9-5 job, and arranges his holiday time carefully so he can support the events he likes, in the words of the man himself “brilliant”.
We talked a lot about events, and how watching it at home, just isn’t the same. Based off this weekend alone, I would have to agree with him. The comradery between everyone, is something I won’t forget in a long time. 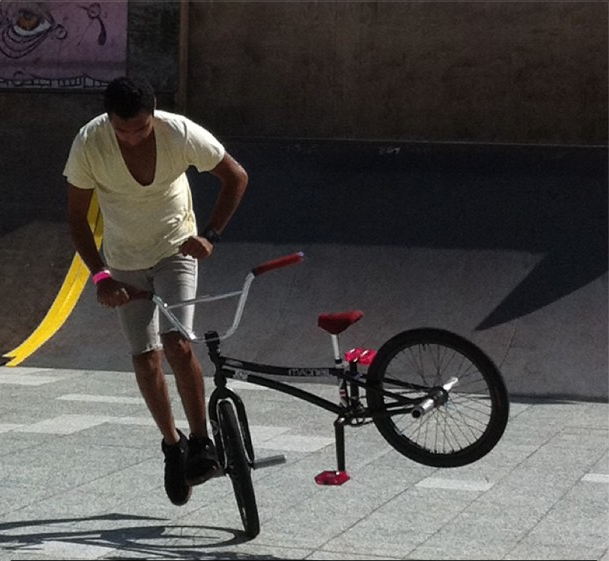 Low v-necks, Expert winner Prasheel Gopal, made the step up to pro, killing it for 4th place tie with Steve Green. Brilliant!

On the Saturday morning I was in the rink for 8am drying the area ready for 10pm opening, and short heavy shower put rest to those plans at 9am, and I feared the worst. By 930 it was beginning to look better, and sure enough stayed dry all day until 6. Which considering the forecast was amazing, the downside is I’m sure the forecast did put a few people off, so firstly big ups and respect to everyone who came and supported this years event, especially the overseas riders that really means a lot!

The Novice class were up first, and due to the nature of King of Southsea, both am and pro park riders entered flatland to get points for the overall. Ten Riders in the contest, not bad for novice in the UK. Declan Brooks I don’t think ever rides flatland at all, and did a really nice long carved vadar to half cab 180 bar with ease. His face when I announced he was the winner of the Novice class was a picture I won’t ever forget, Declan ended up winning Pro Spine, Highest air in Keyhole, Pro Street, Best trick on Plaza and the King of Southsea title, at 15 years old this kid is the real deal, and speaks volumes he is so natural on flatground. Tom Brace rode his yellow happy place to second place, with smooth backwards half hikers, I don’t recall seeing Tom ride before, so I was stoked to see a fresh face in the mix. Matt Spencer made the trip down to Southsea fresh back from a flatland trip to the Czech Republic, and brought his son along to, who entered the contest, his son got one of the loudest cheers of the Novice class for his can openers. His dad wasn’t to bad either and scored a third place finish for his smooth steamrollers.
Panty dropper, Ronnie Surridge had been trying to get decades back all week ready for the flatland contest, and I didn’t see him land one until his run, first go, hanging on for dear life! One of my favourite moments of the weekend! The small crowd we had appreciated it, Ronnie was stoked! Southsea was warming up nicely! 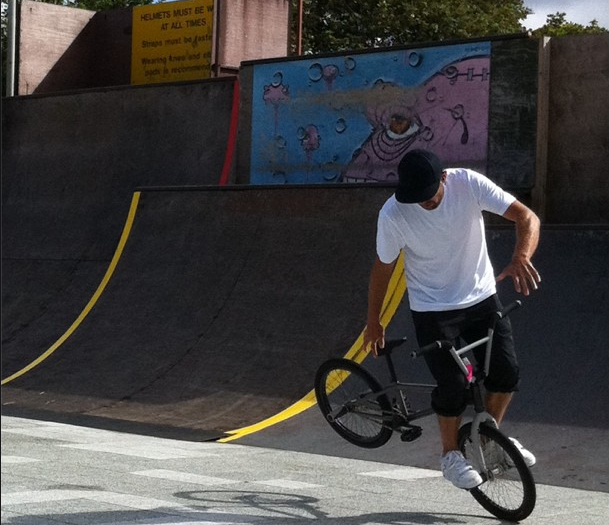 King of the banter, Cunners.

Expert class up next, and after much deliberation with Prasheel Gopal, he had to win the Expert class to turn Pro, “let’s do it proper”, the man delivered and was definitely a cut above the other am riders on this day. Especially digging his jumplash to plasticman! He is in the process of making a highlights video of his riding from the contest so I’ll leave the rest till you see that. Jean Michel Chauvel rode smooth as you like for second place, really nice mix of old school/mid school, half cab to pedalling wheelie to hang 5 for example. TGM Maz has improved his consistency a lot with all the show riding he is doing the past few years for Team Extreme, nailing a smooth steam to hitch, spinning lawns, and snapping out of his boomerangs with nuff style. Thomas Legrand was uber close to a podium spot, nailing some unique ride in, ride outs, great to have support at King of Southsea each year from the French guys, merci! Yinka Thomas, Cunners aka King of the banter! and Edwin Wing rounded out the Expert class. Really good level from the Experts, I hope this continues. 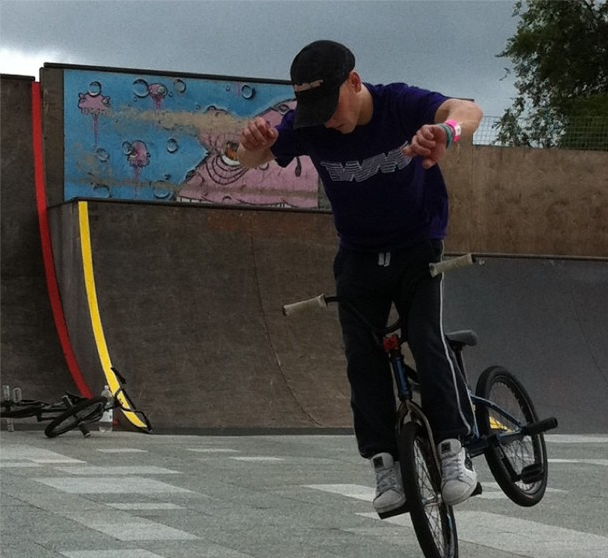 Messiah turbines from Steve Green on the way to tie for 4th with Prasheel Gopal.

The Pro class was up next, a real air of expectation in the air with Sam Foakes competing again, even the park riders stopped to watch him! That normally doesn’t happen, after a shaky start on a hang 5 which he waved off laughing, if you watched the first run edit you will have been amazed like me of how he translated his “no pumping style” to the contest arena after 4 years out of the limelight. Just amazing. First place was easily his.
Second place all the way from Northern France, one of the most underrated riders on the euro scene in my opinion, Romain Georges does not mess around, and goes for the hard shit! Which I respect a lot, during the first run, he hit a really nice xft no handed guillotine to crackpacker to steam 3 bar flip steam opposite pedal rideout, so so good! Keep an eye for his guy!
Alberto Moya nailed a nice steam jump to cliff, amongst some really unique forward karl 360 to steam variations for third place. Aoosstttttt…. 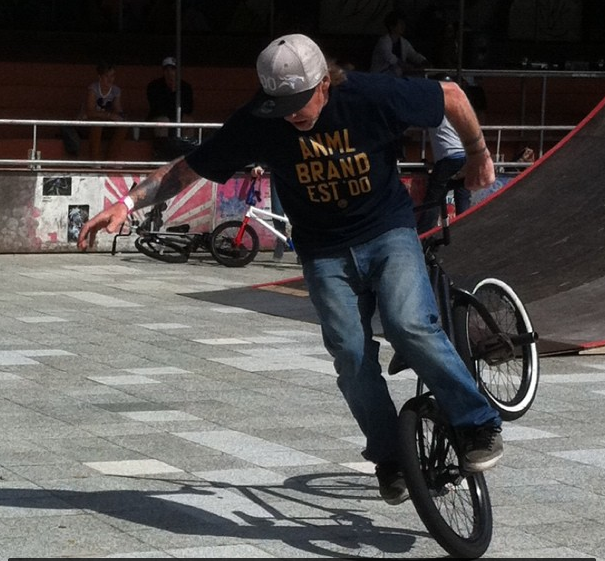 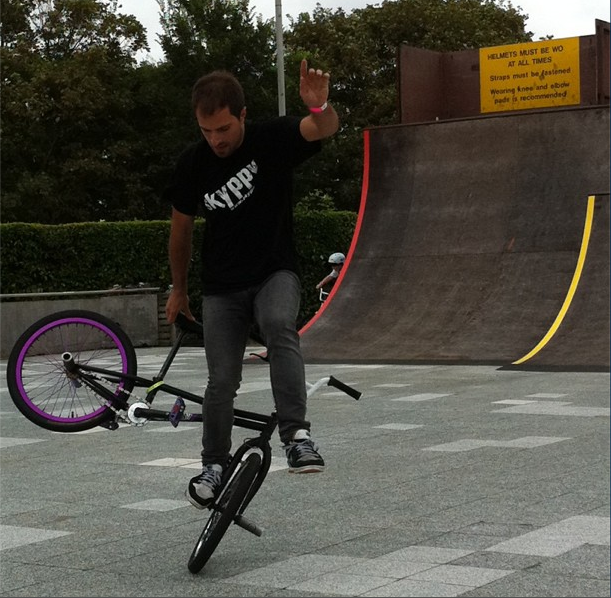 Steve Green and Prasheel Gopal tied for fourth place, just missing the podium. Steve laced together a huge steamroller to right arm halfpacker turbine juggle to leftside halfpacker backpacker round the back to halfpacker, kept going till he fell, that was awesome to see. Prasheel went for harder stuff on his Pro but, lacing a nice hitch juggler steam jump to crackpacker juggle hitch steam pivot rideout! The man that loves all things English was stoked and ready for the pub!
As I already said Navid Saleki made the trip from Holland, and impressed with his originality. Loved his crackpacker jump to mega spin! 6th place for the flatlander/model from Sweden, couldn’t resist saying that, sorry Navid hahaha.
Norbert Onodi is a regular at UK events, and rode well on this day. Hitting a smooth rolaid in his second run.
This was Lee Wilson’s first contest in two years, and he had a bit of bad luck with bike problems, i’m pretty sure he will be back on the contest scene soon, he did hit a smooth xft karl pivot steam combo with the usual Lee Wilson signature buttery.
Amos Burke rounded out the Pro Class, on this day he had a tough time. But was great to see after all these years in the game, Amos was going for hard shit, much respect due! 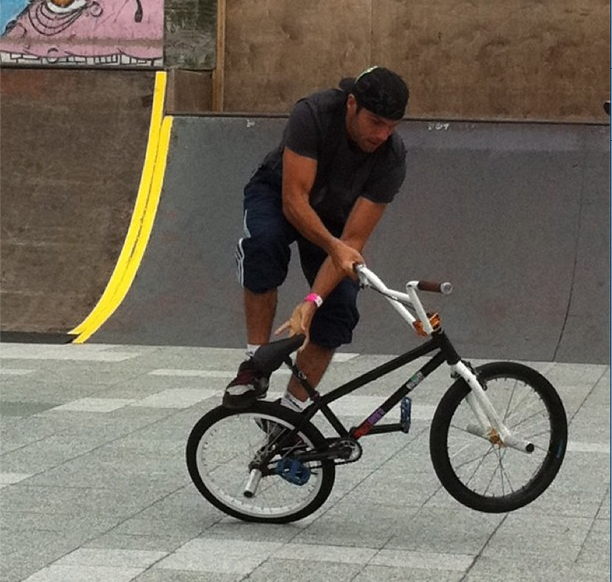 The underlying memory I took out of this weekend was the friendship, the unspoken language of flatland. Meeting riders from other countries and immediately having that bond, the vibe was competitive at all, just awesome laid-back times in Southsea! Thank you to everyone one more time for their support, Thanks to all the sponsors who helped out, Flat Squirrel, DeepBMX, Flatware, Jay Gear, Stance, Hybition, Emer clothing, Volunteers, Judges and lastly thanks to Sam Foakes for paying for the trophies and medals! Congrats to all the winners, full results below!

I’m leaving for Japan right now, its 3:20am Wednesday morning.

Keep an eye on the site, for updates, live tweets, inside scoops, whatever I can get my hands on!

10 thoughts on “Repo: King of Southsea”