It’s hard not to get nostalgic going back to The Green Mile, it turns out it’s been 5-6 years since I was last at this legendary riding spot for the UK flatland scene (search TGM on the sidebar of the website to see what I am talking about.
Yinka Thomas threw down a jam last weekend, with the help of Jason Forde and my schedule was for once free so attending the jam was a no brainer.
The forecast wasn’t looking too great, but it was worth the risk as it os October after all you just never know. As it turns out the weather forecast was pretty much bang on, with two heavy showers throughout the day enough for the ground not to dry all day. 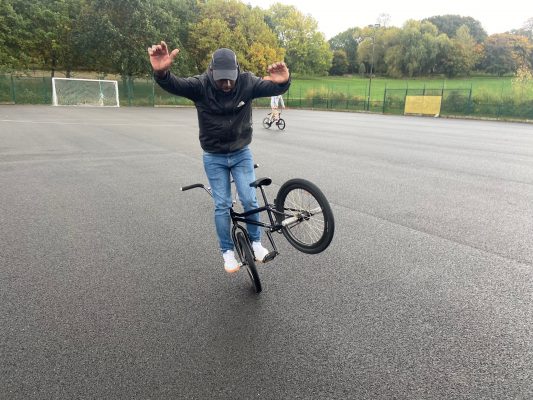 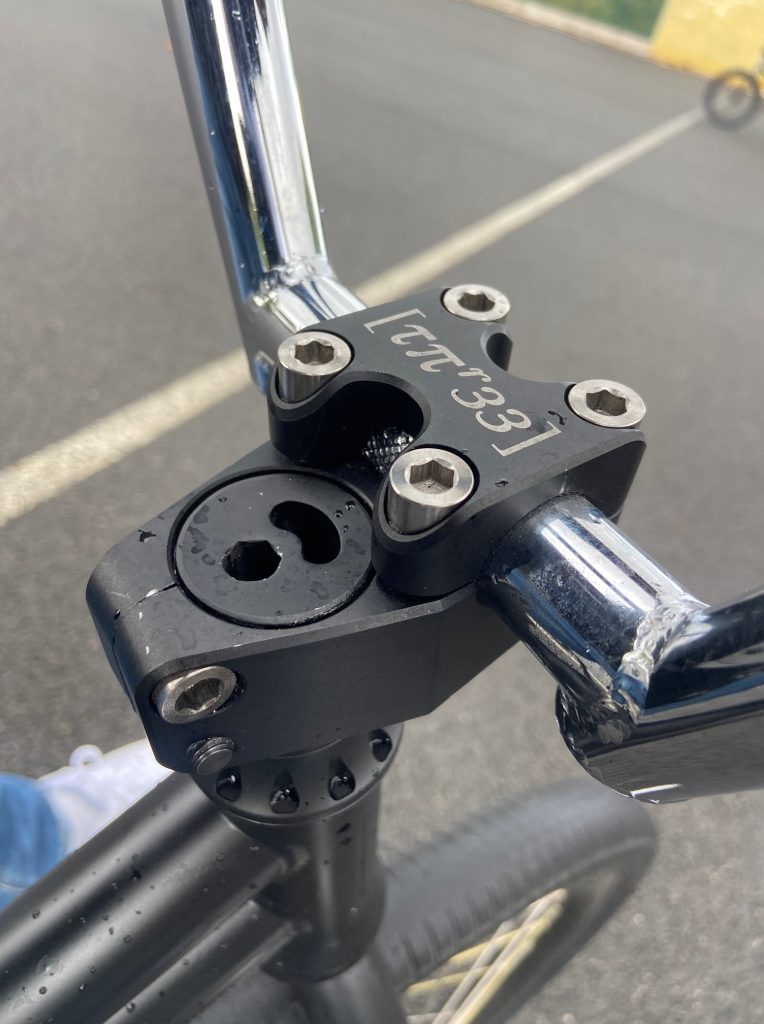 I arrived alongside with riding buddy Piotr from the Eastney Flatland Academy, around 12:30. It was amazing to see Piotr’s expression when he saw the spot, it took me back how I felt all those years ago when the Mile was actually Green. The mile was resurfaced about 5 years ago for anyone wondering what happened to the surface. 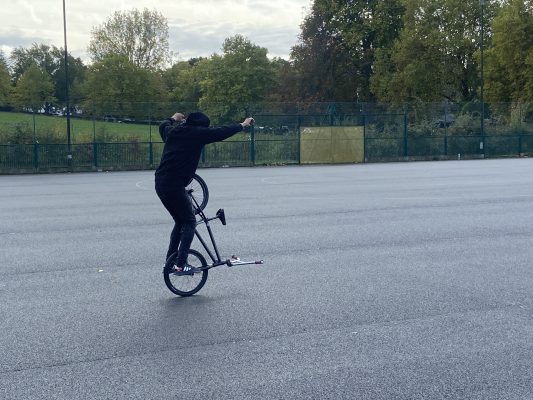 It was great to see riders I haven’t seen in years, Jason Forde (check Jay’s stem above!), Amos Burke, Yinka Thomas, Trevor Lacey, Matti Hemmings, Miguel Pargas, TGM Maz, Johann Chan, Steve Green and many more, there must have been around 15 riders when I arrived. We literally got straight to riding after the usual “hello’s” and all that, half an hour into the session the heavens opened and we escaped underneath the trees at the far end of the mile and we all caught up some more whilst bitching about the weather and praying it would stop. 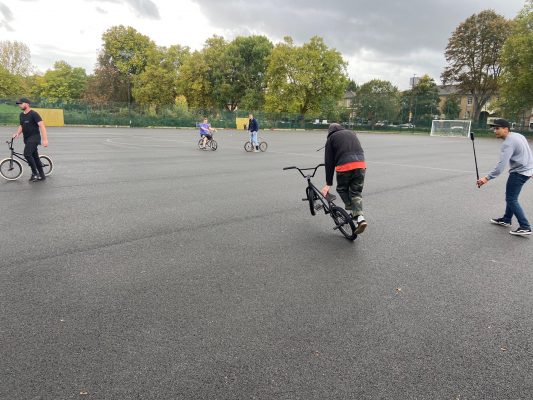 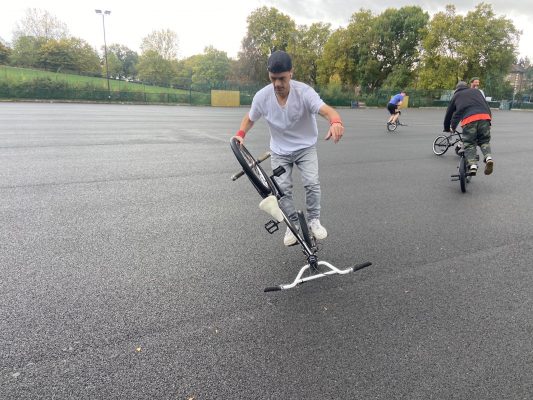 Thankfully the heavy rain stopped after about an hour, one of the things I noticed was that everyone with griptape pegs and brakeless started to ride almost immediately. By now a few more riders arrived, and Phil Dolan also made an appearance on his road bike, good to see Phil. sadly, James White didn’t make it for the jam. 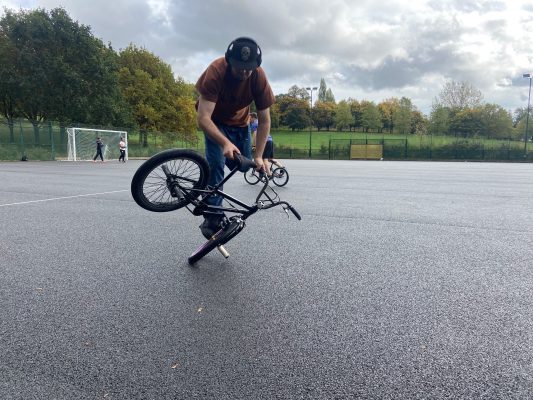 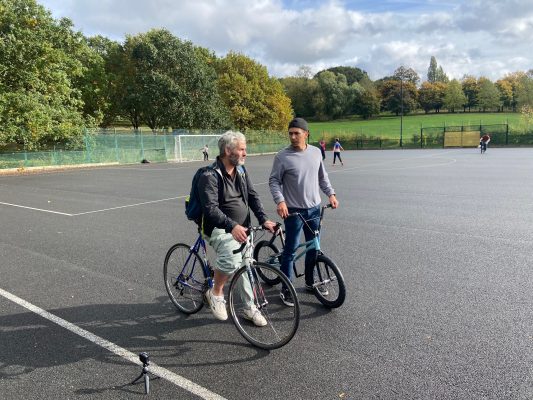 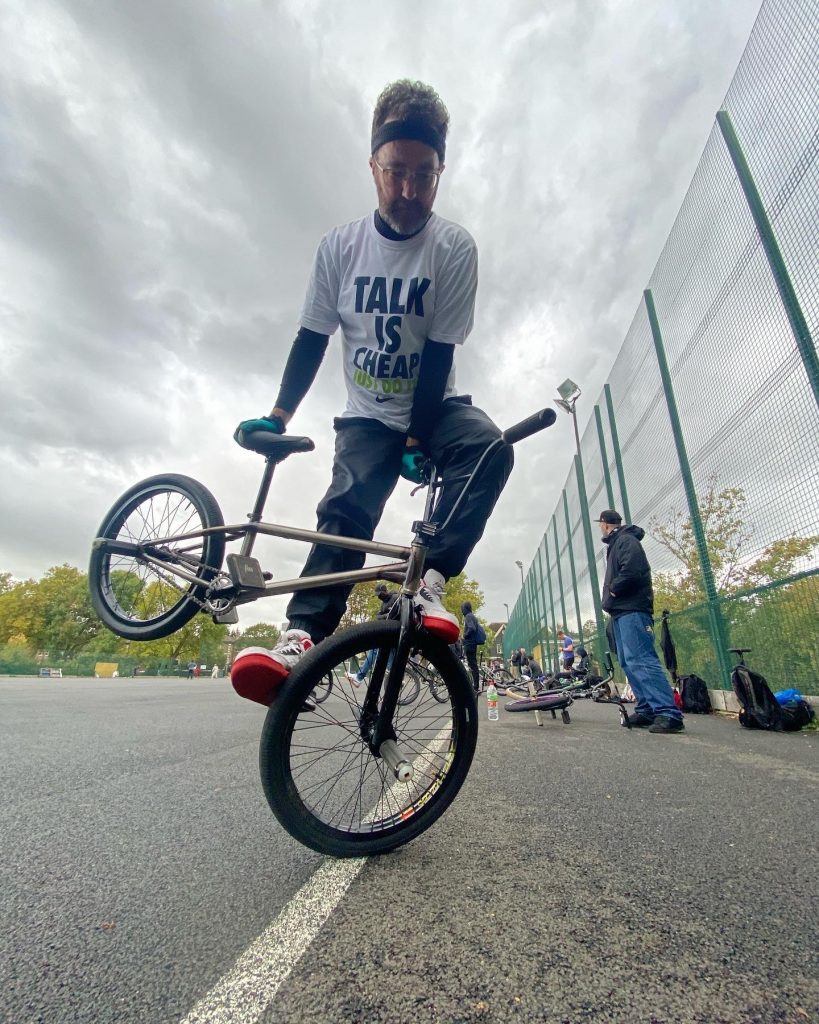 Little pockets of sessions were going on all across the mile, the TGM is a rolling haven and the new surface seemed a lot faster than the previous surface. The spot is so huge, you can have a group of kids playing football (like on the Jam day) and it doesn’t really affect the use of the spot at all. Jason was saying there are sometimes so many roller skaters on nice days that can be a problem. Thankfully there were none on this day (due to the weather). 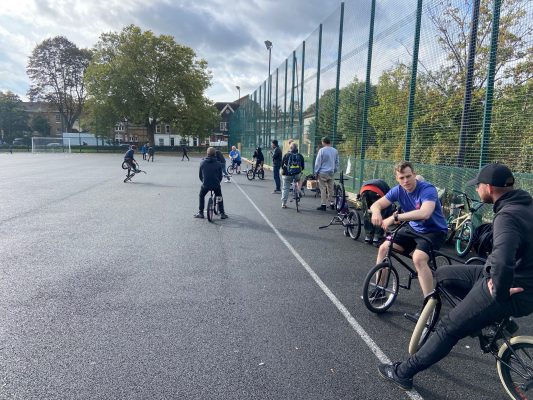 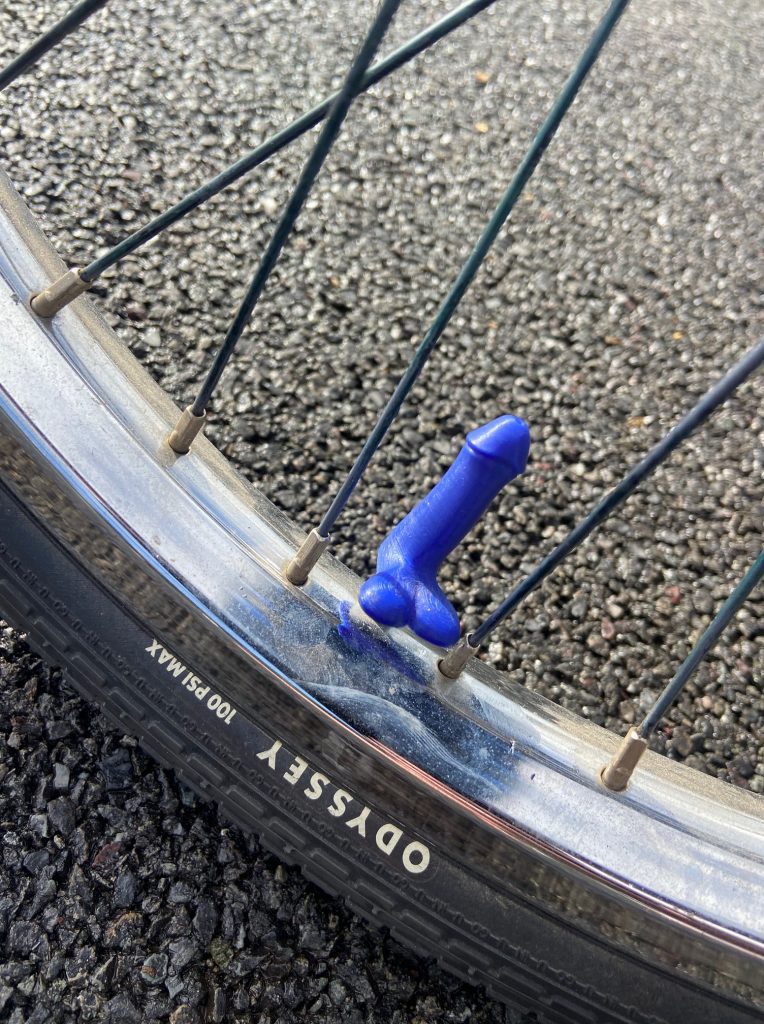 Around 4:00pm the ground was drying on the edges of the miles, so for me it was a session on a corner strip. By 4:30 another heavy shower put an end to the riding for the day and after seeking shelter for a bit we headed to a Pub in Gypsy Hill just up the hill and down the other side of Norwood Park (even pacing a DIY looking skatepark). We saw an amazing rainbow over the city of London! 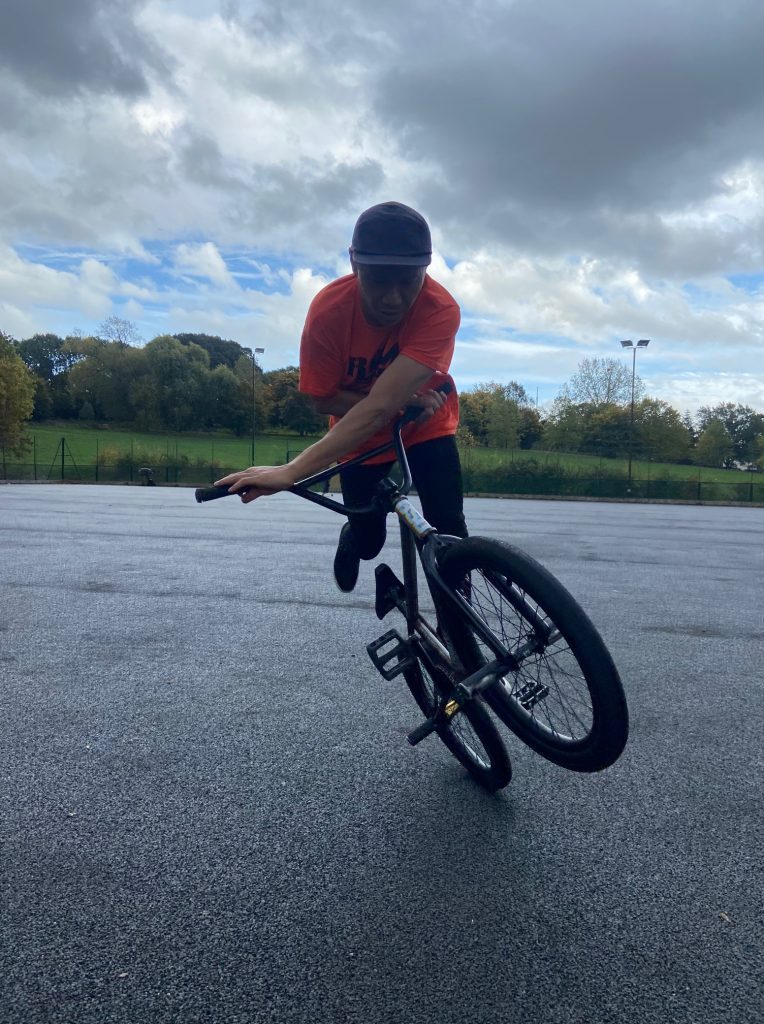 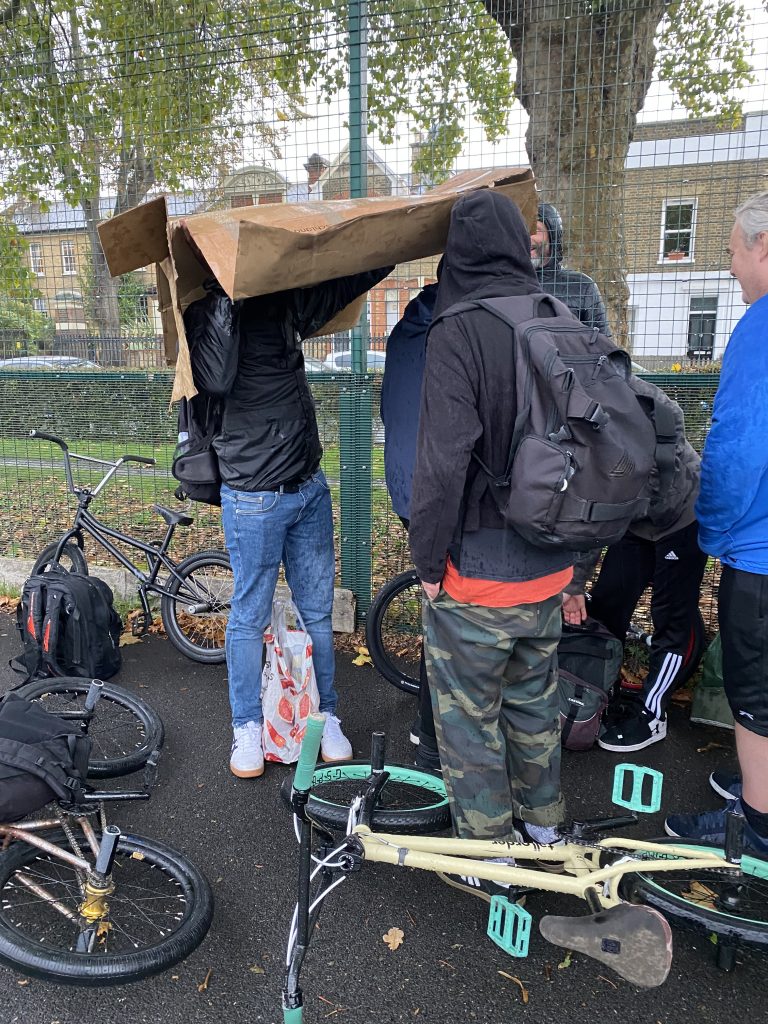 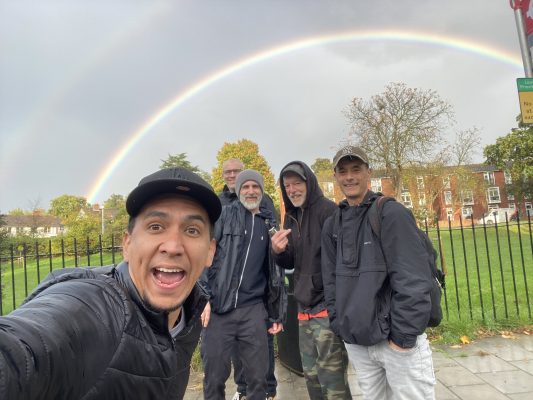 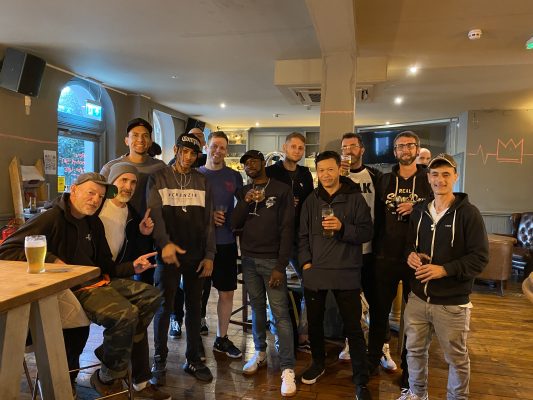 It was great to catch up with everyone at the jam and the pub afterwards, hopefully there will be another jam in the spring/summer. Thanks Yinka, Jason and everyone involved who helped get everyone together.

Do you have a small scene, why not put on a jam in your area?