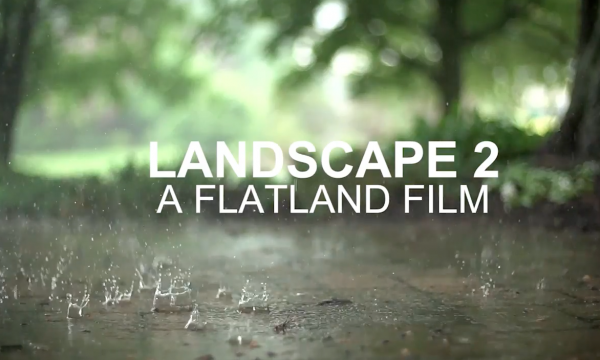 Like I said in my review of Landscapes 1 last year, DVD’s in the modern era are a sad rarity in our scene from my perspective, during the last two years you can count those on less than one hand. Dane Beardsley’s Same thing daily project and IGI’s travel video are all we have had. Stewart Munro from Australia stepped up to the plate with an ambitious project to collect and edit together rider sections from all the planet, when you think about that in the modern internet culture and free edits available everyday it almost seems like a thankless task.

Thankfully Stewart stuck to the task which being so far away from all the other riders is I can imagine a tough task to collate together. The downloadable video straight to your laptop is catching on in other sports such as Skateboarding, more recently massive companies such as Adidas are releasing their projects for a small fee online. Will it catch on to what is essentially a small flatland audience? Only time will tell…

Landscapes 2 starts with a nice intro describing verbally the feeling of flatland and what it’s all about “it is a mirror that shows each of us who we are”. There’s always a unwritten formula to making a DVD, banger section to start, middle and the all important who got the last section. Would this follow suit, 52 minutes long let’s get into this! 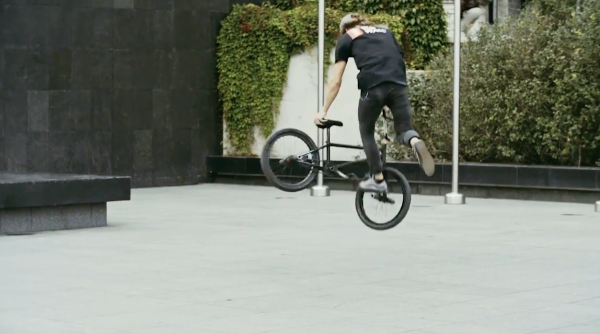 Bert Ribul from Estonia got the all important first section, and after his well documented knee injury trouble it’s nice to see him have an injury free year. The opening line flows really nicely from nose to xft inside steam, and ends flowing out with a half cab nose foot jam whip out pedal to pedal.
My favourite lines from Bert’s section: Xft nose half cab jump to steam to crackpacker turbines followed by the the hang 5 backwards facing spinning circle k to pendulum halfpacker, style for miles out of BR. I hope he can stay injury free for a long period, nice start to L2. 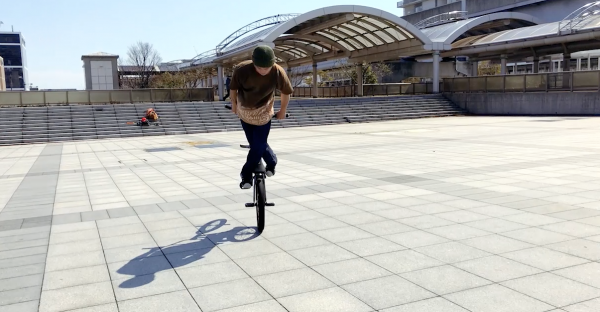 Next up is Hidenori Ishizaki, jamming to the funky sounds of Lenny Kravitz. Hidenori is infamous for his amazing backwards backyard styles that he killed the Master of Creativity with last year and this section doesn’t disappoint. Easy on the eye and that timeless style to boot, not to mention the filming is a lot higher quality than I am used to seeing his riding via MOC.
Some of my favourite lines from Hidenori’s section: Macaroni degroot style undertaker inside switch b cross over peg wheelie back to macaroni Degroot undertaker out, now to his credit `I can’t work out if that macaroni is switch or not. Whatever the case I absolutely love that line and the way he executed it.
This follows with a massive two footed xfted pedal manual across the entire spot, mind blowing bike control out of one of japan’s up and coming talents who is really coming to the forefront of the sport.
And the last line at Meriken Park, Kobe, wow you just gotta go buy it to watch! Mad flow! 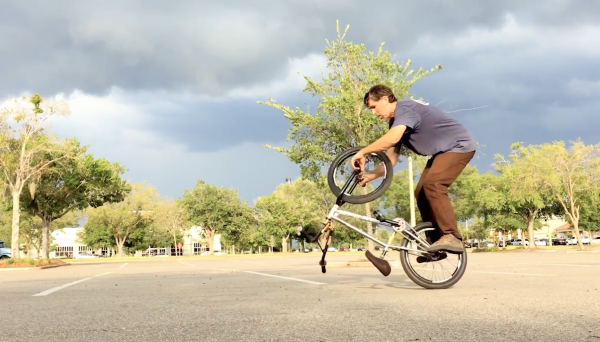 From Japan to the USA, and it’s the turn of Deco’s Chad Degroot, of course Chad is one of the best to ever do it and it’s rad to see him take the chance to film a section for L2. The section opens with his classic degroot undertaker as if to say, “hey thats my trick your all doing”. My favourite line from Chad’s section is the no handed backwards crack across the whole spot, thats a tough one that he makes look easy. Skills to pay the bills! 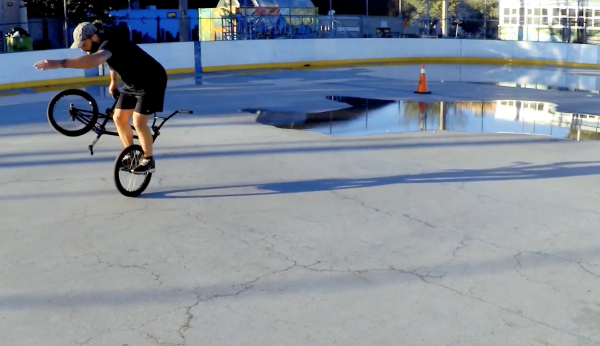 Next up we venture North on the map to Brandon Fenton in Canada. Brandon over the years has contributed so much via video parts. I liked seeing Brandon battle the puddles at his spot. It gives perspective on the struggle, and he makes backwards crack one handed backwards facing whiplash out look easy, damn. The Royksopp “What else is there?” tune fits the section perfectly, one of my favourite clips is sun setting whilst Brandon appears to effortlessly drop a half hiker around the world backwards opposite steam to crackpacker out regular backwards steam, its a beautiful moment and the type of combo you cannot do without years of riding under your belt. If I had to pick the banger for me, is the steam to halfpacker g turn to backwards halfpacker elephant glide body varial out, that line is so hard to do like that controlling the backwards halfpacker off that g turn, it may go under the radar but if you know.. 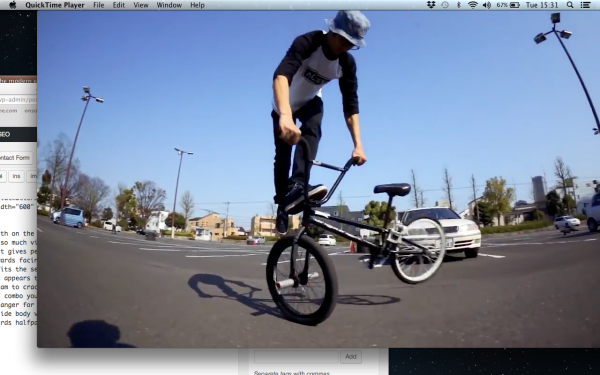 Next up, back to Japan and it’s time for the talented quirky, Koichi “Forkone” Higo! Forkone’s section with backwards shove it stem roller. Love his on the edge nimble style, looks like he’s off the bike but keeps going. Some of my favourite lines include the opening fork wheelie karl line using his foot on tyre to move the bike around, watch the control. The triple backwards stem lash is bonkers, and ending multiple stemlashes are on lock. I would love to see much more of this guys riding, the way he stomps out of his boomerangs is amazing to see! Don’t sleep on this section…

Next up is the mix tape time, and various riders across the globe such as Bruno Zebu, Chris Vasileiou, Harutada Shimoyama, Jody Temple, David Hoffmann, Wolfgang Sauter, and many more.

Next up is one of the best sections of Landscapes 2, Raphael Chiquet. The man that for me that destroyed the back wheel pivot game after Nathan Penonzek. Wow this is section is full of complex back wheel lines that got me hyped. 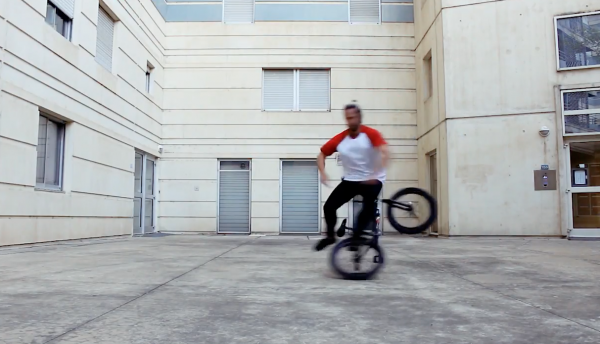 Raph’s section opens with his classic stubble duck gerator, lard yard, dick trick whatever you want to call to with a subtle turbine between each stubble, the second line is so good and something I’ve seen him try at numerous contests but never saw the end product. Inside pivot to g-roll stubble duck gerator ice cream pivot regular gliding switch -b shove it caboose stubble peg wheelie gliding dump stubble peg wheelie to foot jam decade! What a delicate move, this let me know Raph has been putting work on this part! I was glued to screen on the first watch, wow. There is so much to take it in Raphael’s riding, my favourites aside from the line already mentioned include the no handed body varial gerator mid combo, the 360 bike pivot dump body varial xft ice cream all in one fluid motion straight into caboose stubbles, Raph is back killing it and I am sure I will be rewinding this section in years to come and you to when you download this! It is also, worth mentioning the tune Cage the Elephant “Golden Brown” fit so well with Raph’s riding. Get on this!! 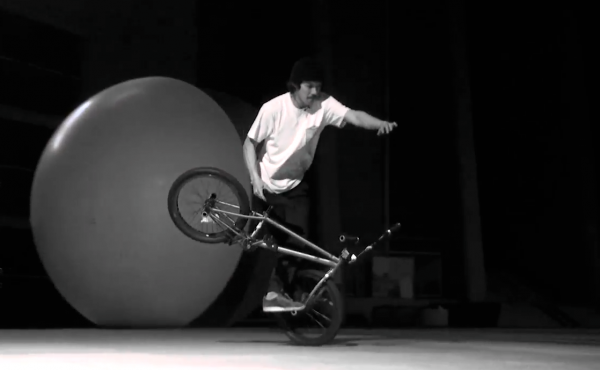 From Paris, France back to Japan and it’s the turn of underground rider Takuji Izumi. The theme of the riders landscape rolls through the entire video much like it did in Part 1. And with the pace changes from Raph’s fast pivot style, to Takuji’s slower rolling style. My favourite from Takuji’s section is the pedal 5 to whiplash pedal turbine whiplash steam whip to hang 5 ankle death vadar pivot to xft pumping steam to opposite xft half hiker opposite xft hitch pivot steam the other side (this combo is still going??) to crackpacker step over left side halfpacker pivot xft steam pivot steam whip to hang 5 stem boomerang out! Butter smooth styles from Takuji, and a nice contrast in riding styles to everyone else I would add to. Once again the Bonobo track choice complimented his riding perfectly too… 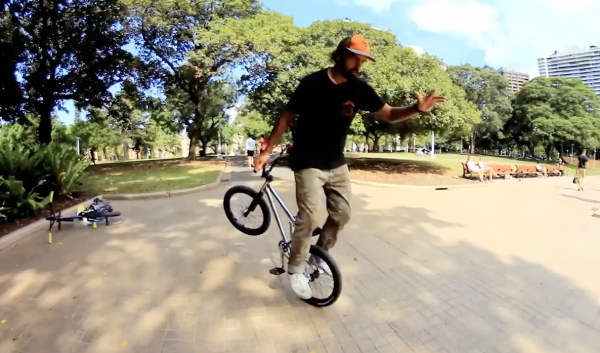 Next up, ex UK resident Paul Chamberlain who’s now lives in Australia. Paul possesses mean vadar bar flip skills and I was interested to see how he would follow up his amazing section from Landscapes 1. The last two lines follow that vadar front scuff bar flip concept, and are done so well. Getting that speed off one scuff I am rather jealous of Paul. Feel good section out of Mr Chamberlain, style for miles. 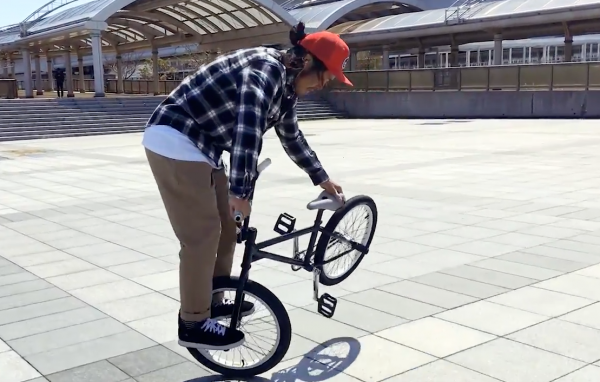 Next up, Shinichi Kiba delivers a hammer section all the way from Kobe, Japan! From the opening backwards facing whiplashes to fork wheelie around the worlds to backwards crack backwards facing whiplash you know this is going to be serious stuff. Also wherever he and Hidenori filmed, wow that spot just looks so good ad my favourite clip is Russia walking around the world fork wheelies effortlessly across this gorgeous marble spot. The man just keeps going, mind blowing skills that give you the real feeling he is just floating on a bike. There’s a while lot more of course but I del like those around the worlds some up his section quite well. 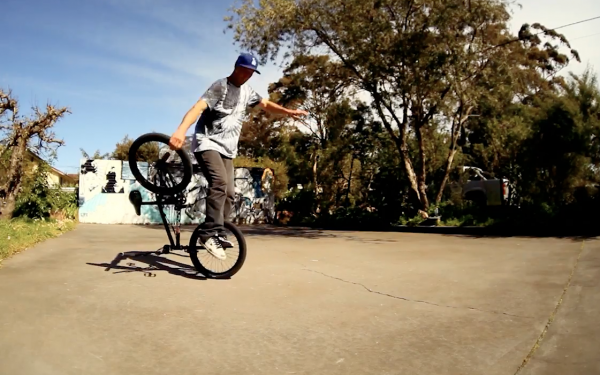 The last section falls to Simon O’Brien, wish comes in two parts. Imagine being Simon O’ Brien and that bag of tricks. What do you choose to do? Feeling the second track with Doom and Sade. Where do you start with Simon? I got the feeling this was like a retrospective type of section where he goes over some old ground and adds a twist to it, he also did a move I have tried a bunch but I got nowhere. Look out for the spinning circle k to backwards hafpacker backwards backpacker pivot xft hitch out in the first part. In my opinion thats one of the hardest lines out there and Simon makes it look easy.
There are of course many highlights: the multiple circle k kick flip half packers, the opening xft karl jump backwards halfpacker turbine backwards backpacker pivot xft hitch, when Simon goes down this route he can’t be touched.

To finish this up, it’s like the musicians second album. Should it better than the first, what makes it better? I would say the production and music flowed way better this time and the music choices reflected the riders style more effectively. I was stoked on Hidenori, Simon, Raphael, and Russia’s part’s the most.

Peep the trailer one more for a final taste and reference to my breakdown:

Download this one right now and get your winter motivation.