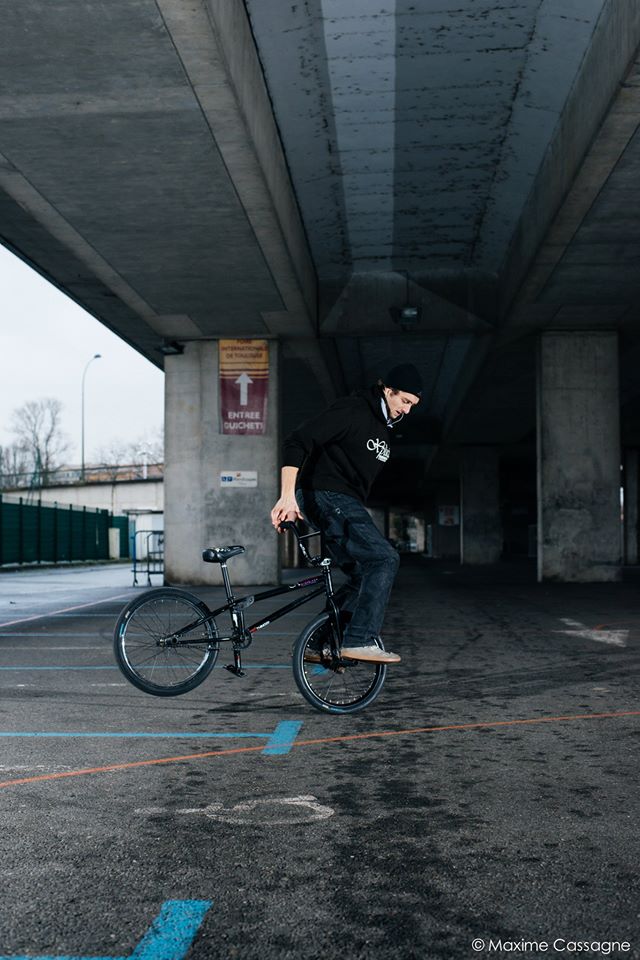 Thomas Noyer kicks off our Flatmatters Online Awards Winner Interviews series, it is fair to say that Thomas had an amazing 2013! His progression was rewarded with the Editorial vote for “Edit of the Year”, and you the reader of Flatmatters voted Thomas for “Breakthrough Rider of the Year”. I caught up with Thomas to discuss his year, his thought process going into the Frontyard work edit and his recent Deco hook up. Read on!

How long did you spend filming the edit?
From the first day I started to film to the last one, it spend one month. During this month I rode almost everyday but I filmed only 10 days approximatively (time to learn tricks or pull combos I decided between each clip I kept for the edit). I remember the great conditions at this moment to ride every day and I rode two times a day and sometimes before to go to work…. From this ideas, the edit project involved I had to pull this tricks for my first time.
Furthermore, edit project encourages me to push my progression and tricks I just learnt. For example I began to learn turbine rolling and pivoting frontyard crossfoot rideout. The first ones were tight and sketchy… So I tried to pull it more easily. The next day, to go further in the same trick, I tried it but with a cross foot pedal ride out. Then the same move, but at the middle of a combo and so on… Sessions I pulled trick for the first time (that was crazy!) I just filmed it to see how it was in video… I didn’t keep any clip with a first time pulled trick/combo. After having watched each one, I removed it in order to pull it more properly or with more speed for the definitive edit… There was sessions I pulled trick that i missed several times, but back wheel hit the ground or the rideout was speedless… So I began again until I am satisfied with the result…

It seemed in 2013 your riding style and flow became more aggressive and stylish than ever. Would it be accurate to say you are refining what you are doing, and in turn new ideas are coming from this concept?
About style, I don’t know… I always paid more attention to the tricks than to the style (even if that count in the global appreciation…). I’m more sensitive to what was done rather than how it’s done… Most of time, it’s people watching the rider who give him a label “smooth”, “style”, “brutal”, “energic”. I mean, I do nothing for it during my daily practice and I’m very happy and grateful when people or rider tell me my riding is stylish and that encourages me to pull my tricks and combos as properly as I can.
I think riding for an edit-work push to clean combos. I think also, practice one trick during hours and hours make it more easy to do, with more speed, more angle, more commitment and finally with more facility and lightness which contributes a lot, in my opinion, to give style to the riding. About new ideas from this concept, I think any progress can open doors on other tricks, other move. It was my process: learning a move for a trick which open the way to an other move and so on… 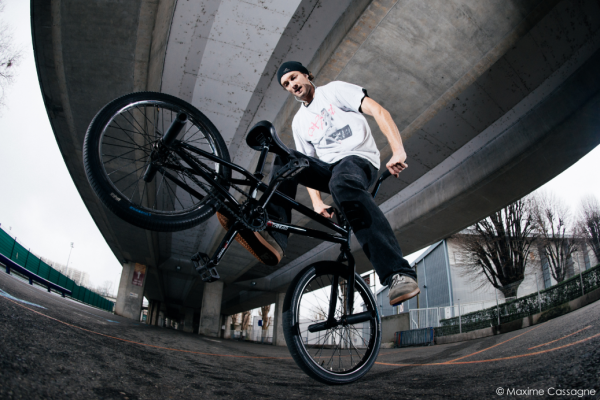 Tell me about the BB crackpacker, it’s rare to see a variation nowadays that hasn’t been done. Long process learning it?
Crackpacker BB was the cherry on the cake for the edit. I always dreamed to find a kind of new rolling position. Rolling position in particular because this family of tricks is, for me, the foundation of balance, of flatland… First we try to find a position on the bike then we try to ride with or to combine it but base is the position. Thinking of a new rolling position, I dreamed to find a way to learn crackpacker both foot on pedals. (I already told you this in a top’s 5 interview. The question was which trick do you would like to pull…). But so hard starting from crackpacker on the pegs (pedals are so far away to put feets on them from crackpacker!).
So, I tried to find a other way… Right foot on BB was the good one. I began learning to hold the position. During hours and hours, I took crackpacker position, both foot on the floor. I pushed the ground to come into crackpacker on pegs and I tried to switch to crackpacker BB position and to hold it. At the beginning I didn’t think it was possible… So I tried changing my gravity center, more pushing on the right leg, trying other hands positon on the bar and, gradually, I kept the crack BB position increasingly long. I just had to find a way to come into basic crackpacker with enough speed and a way to rideout.
Then, to link this new trick with the concept of the edit to work with frontyard as starting trick, I had to practice to combine a frontyard to the crack BB. I had the basic of turbine frontyard whiplash, so I tried the half turbine frontyard whiplash serving me of crackpacker transition speed to switch to the crack BB position and that worked!

The readers of flatmatters voted you the breakthrough rider of the year, tell me about your 2013? Ups and downs of course like everyone?
Firstly I would like to thank all the readers, riders, followers who check flatmatters daily and voted for me for this awards. I was very stoked and grateful at the same time! 2013 starts well with my entry in the ABT team, practicing for the very nice Alençon contest (A.B.C of flatland this year 15/16feb) in France with a nice organisation and a lot of great riders! Then, Astrolabe Contest was a nice trip and contest with amazing vibes and runs from each riders. FISE was FISE. Battle with Alex during first round of finals was a great experience but, even if he rode well with his technical switches, he didn’t have enough concurrence cause my really shitty runs. During July, at City voice contest in Grenoble (France) I failed and I injured my right wrist: 6 weeks without riding and I already have checked my flight to KOC… Time to practice a lil before going to UK and it was KOC, one of the best moment of my rider’s life. Everything was great: trip, welcome, meetings, riders, contest, vibes, chilling time…To win KOC had a big part of my motivation before investing me in the edit project… Two month later, I won the VU (Pessac, France) and one more time it was a great feeling… Then I started seriously to film for the edit.

That’s a great journey Thomas! You of course just got deservedly hooked up by Deco BMX, what set up will you be riding? Oh and welcome to the team haha!
At the end of December, Thierry, the TM and boss of Espritbmx online shop/team (which have the biggest stock of flatland parts in France) told me he was speaking to Chad Degroot to distribute Deco in France. He asked me if I was interested to ride on a Deco frame. How not to accept? The end of January, I learnt Chad was ok… I was so happy! I’m really proud to ride for this brand with riders as Chad, Terry, Tsutomu, you Effraim, Mat Olson… and come into the French espritbmx team (with Fabien Stephan). Amazed even today! So I choose the Succubus Lite frame 19,5″TT. Can’t wait to ride him!

That’s dope! If you had to pick one, what was the highlight of 2013 for you?
Definitely, my highlight of 2013 was to win KOC in Southsea. Discovered a nice city with great vibes, met really kind people, had very good time on the bike and outside there… A great feeling wich was different, but as intense as one of to pull for the first time a real crack BB rolling!

What are your plans for 2014?
Firstly I can’t wait my deco frame came in. Time to assemble it and test it…. Then, I hope spend as good time on the bike and with my friends as the past year (jam, events, shows). About events, there will be A.B.C flatland contest, then Astrolabe contest in Normandie cause they are both great events for the riders and public. I’ll also try to make more trip this year. I would like to ride in the two european steps of world circuit (FISE and Barcelona) but especially continue to progress and learn other tricks and moves.

Any final shoutouts Thomas?
First shoutouts to you Effraim for giving me the opportunity to explain my process dropping my frontyard work edit and all the readers of Flatmatters for the votes.. I would like to thank my girlfriend and my crew for supporting me, Maxime Cassagne for shooting photos with me, Jean Bulhon who thought of me for ABT team: it was short, but intense! I think to all the people and riders I met this year during the differents events I rode… I would like to thank for the support: Xplicit energy drink, Snatch underwear, Lockwood skateshop and more recently Thierry (Esprit Bmx) and Chad Degroot (Decobmx) for hooking me up in their team!! Ride on!

Thanks for your time Thomas, that was fun catching up!