The last two weekends have been great for UK flatland, two weekends, two different events of sorts. To make a change from my usual repo style on jams, Johann Chan stepped up with this interview with Brighton jam organiser, Trevor Lacey. How to organise a jam in unison with a large event? Maybe you are interested in organising a jam, unsure what to do, read on, and maybe this will spark some ideas and motivation wherever you are in the world. Big up to Trevor for stepping up and making something happen for the UK scene. 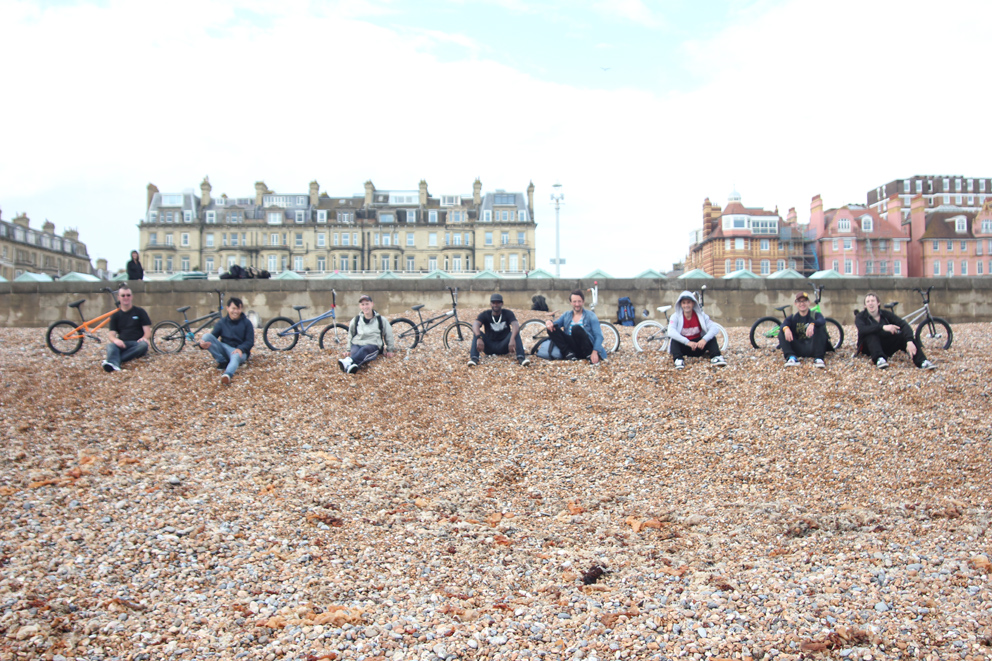 Flatlanders by the seaside. Good times! 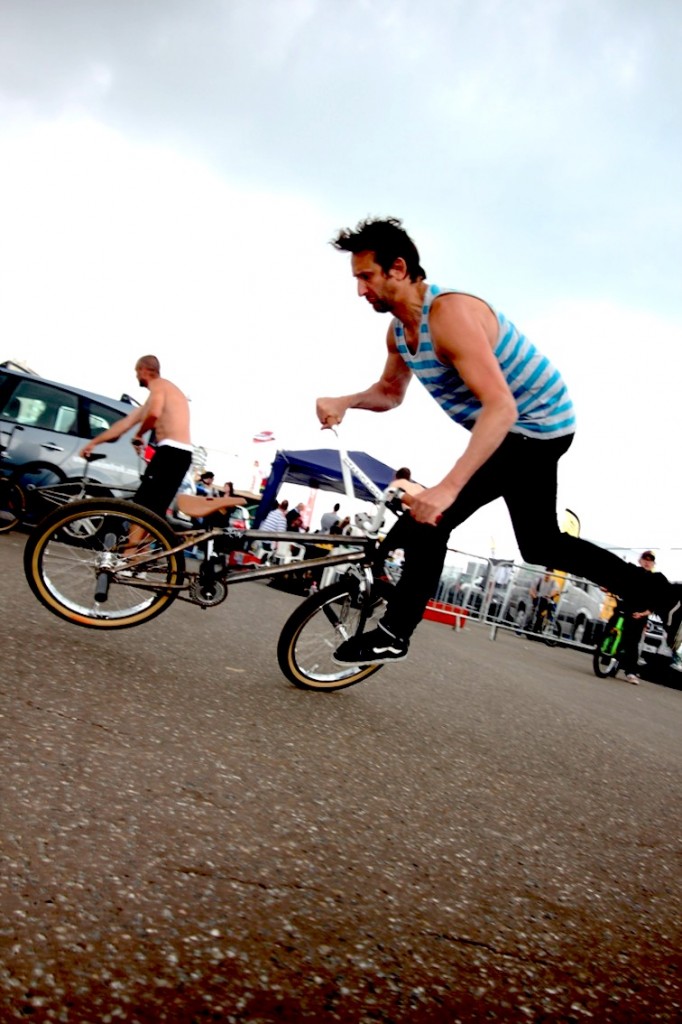 So what triggered you to organise the jam? Did it start from Effraim’s interview on Flatweb TV?
Yeah big style!  I would say it contributed a lot.. I watched ‘that’ interview and initially I admit, I felt pretty bummed out by it and what you were saying regarding the UK scene.
At the time, to put it bluntly,  I felt that for a worldwide audience it was  delivered with a bit  too much negativity.
Afterwards I spoken to a few others about ‘the interview’, however their reactions were varied  So, not getting the answers I wanted and not being one to shy from a flatland debate…Effraim and myself spoke on FB messenger.
He explained that the interview was designed to be very candid, as he almost wanted to provoke a reaction…to wake up the scene a bit.  As the conversation unravelled we discussed some of the existing issues and how we could change things, as a result “The future of UK Flatland” Facebook group was spawned!
This helped with putting things into perspective, and personally wanting to do something for UK flat scene… I just had to find the perfect opportunity really.

What was your first move, how did you find out who to speak to?
While speaking to Rob at Brighton Bmx Co I learnt that The Paddle Round the Pier annual urban and water sports festival were looking for something, to replace  the slalom Skateboarding. I gave one of the organisers a call, swapped ideas and thoughts, came to the conclusion it could work and we were on the ‘same page’ and the Flatland -Jam/ PRTP 2012 came about!

Did you have to make many phone calls/emails?
Yes I spend most evenings arranging the jam, and once or twice a week I touched base with the organisers with various questions and requests. 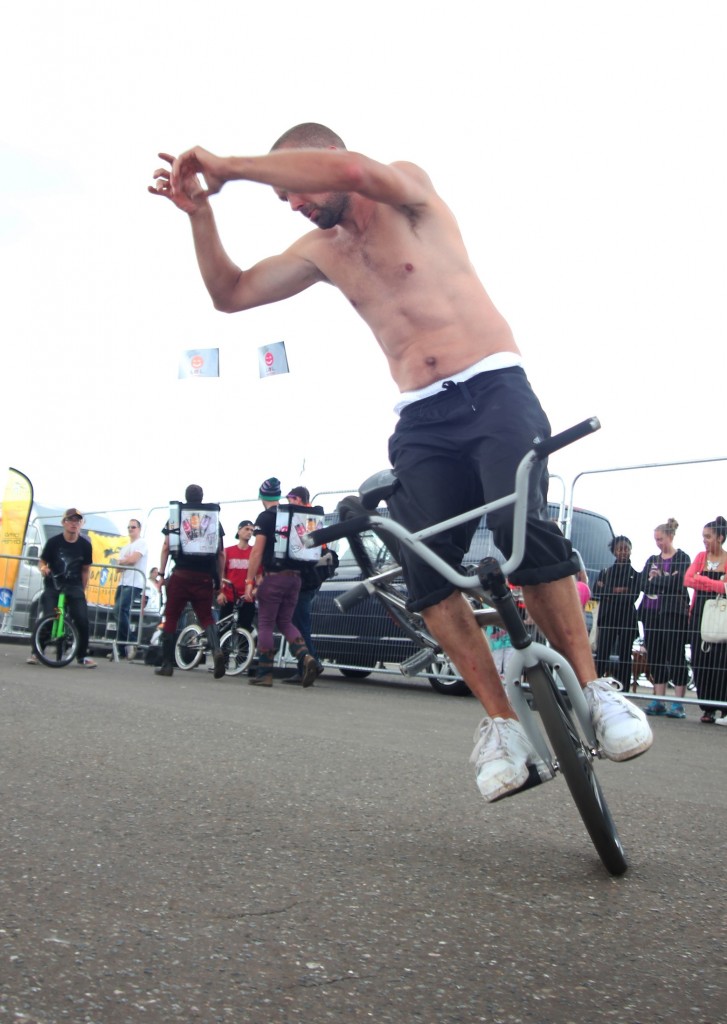 What sort of hurdles did you face?
Well the biggest hurdle is taking on the responsilbilty… Putting your name down for something that could possible be slammed . Flatlanders can be a fussy bunch (me included!)  There are lots of factors that could make for a big fail…Fortunatley the spot was pretty much on point which is always  a big concern for any  flat jam.
Discussing my requirements I established I only had a very limited a budget from PRTP.
At first I was asking for things like a wooden platform (similar to the Urban Games style area) however this was not to be in the budget for this year’s.
So my  main priority  was to make best of the given situation, and present to PRTP the concept of making the Flatland Jam a permanent fixture at the event and therefore getting some budget for next year.
As it turns out, they were really grateful for what we had done, and due to everyones support, have since been asked if we would to come back next year!
With a few tweakes here & there, I reckon next year’s will be the beesknees!

How much time did you spend?
Took a 2/3 months,  fair bit of negiotating and a fair bit of time and effort to seal the deal.

Did you use social media to promote the event?
Yes, I designed the flyer, then whipped that onto Facebook. Facebook was the obvious tool for getting the word out, the odd Tweet, and a bit of Instagram, and of course your good self popped it on Flatmattersonline  (thank you very much!) 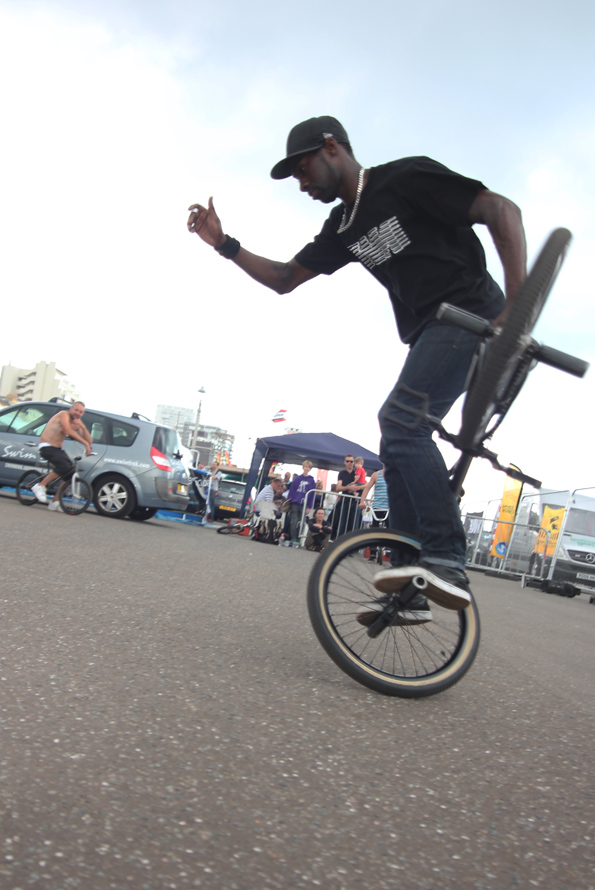 If you were to do it again- how would you change it?
The weather LOL, like I mentioned before, the main objective was to have as a permanant annual fixture, so we acheived that (despite that odd shower) the job was complete, it’s now up to us to steer it where we want it to go!

Any tips for people wanting to get flatland into an event?
All in all, sounds like a cliche, but perseverence is the key. I would say if you know the area or local festivals hit them up, or contact your local BMX shop!

So we hear there is more next year, how do you hope to progress the jam?
Well I’m open to suggestions!?
But I am fully aware of what’s required to make it even better for future.

Thanks Trev for your time. Look forward to next year!
Thanks FM

9 thoughts on “Trevor Lacey Interview – The Paddle Round the Pier weekend!”