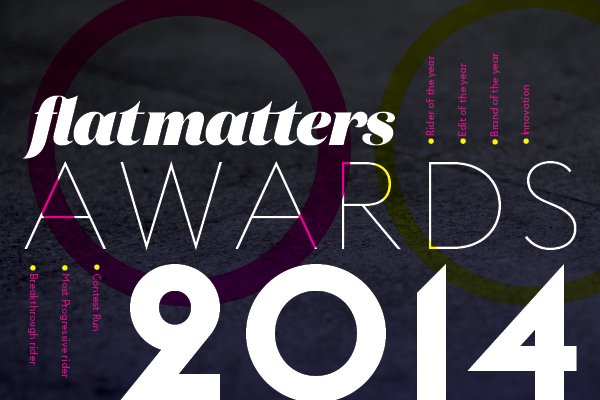 As I sit here reflecting on 6 years of running FlatmattersOnline, I just dropped the second annual year end awards yesterday and Simon O’Brien’s amazing new edit, the site has come along way, taking journeys of ups and downs. I wondered what kind of influence Flatmatters has had on the flatland community over those 6 years?

There was a moment a few weeks ago at the Battle in the Rockies where something hit me as to magnitude of what I am doing. As I walked down the stairs of James McGraw’s house, everyone was watching a video from the site that I had literally just posted upstairs. You see normally I am back in Southsea, and don’t see this side. It was somewhat humbling to see the likes of Dub, Jason Plourde, Dez Maarsen, and Benjamin Hudson around the table checking the site. This got me thinking about the influence the site has, responsibility to what is said, there are many points/issues that arise the longer the site runs for.

It’s hard to measure that influence because I am so inside of it, I can talk about the sacrifice I have made to try and help flatland over the last six years. The man hours it takes daily, to produce the site, regular updates, working on new content, etc but I’m not too sure how interesting that is. I was interested in asking some of the riders that have inspired me in some way with Flatmatters Online, how they felt the site has influenced the flatland community over the last 6 years.

Thank you all reading this at home for what you have made Flatmatters become and the riders that all got back to me with great insight! Read on! 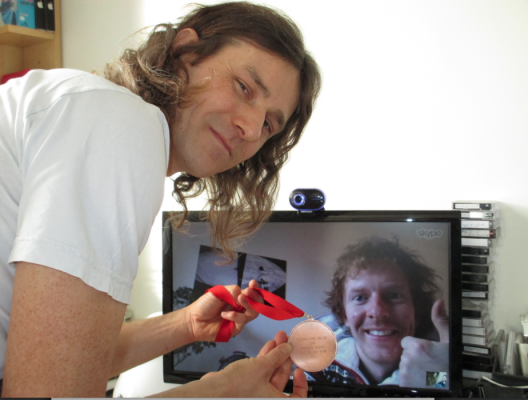 Heresy’s Alexis Desolneux celebrates his Reader Choice award for Edit of the Year 2013 with Sebastian Grubinger (interviewed below).

Sebastian Grubinger:
In the past six years flatmatters definitely became a main part of the flatland world. You won’t get around this blog, if you’re into flatland.
I guess a lot of people check flatmattersonline every day cause it collects the best edits in flatland, tells news, gives riders kind of an “official” platform for presenting themselves beside social media and offers way more…

In my opinion flatmatters is also one reason why riders started to film and document their daily riding more and more the past years. As I said, the blog gives the place to show edits, tricks, … to other riders. For me, this has, like lots of things in life, a great, positive, progressive but also a risky side. But that’s an other story…

Flatmatters is my daily newspaper that keeps me up video-wise since years and I really appreciate what Effraim and flatmatters are doing! Happy birthday!

Joe Cicman:
My first big memory of FlatmattersOnLine was in late 2010 when it first posted a video of Joel I uploaded from a parking garage a few hours earlier. He did a cliffhanger, grabbed a water line, swung up then back and went into a backwards cliff.
We flipped out that our buddy was on The Interwebs in a major way.
About a month or so later, Martti put up that clip of *him* cliffhanging into a wall then pushing backwards. We immediately drew the lines of influence. When speaking to Joel, we call Martti’s trick A JoelHanger.
And that’s been my feeling of FM since: the excitement of being featured, and watching the global conversation influence the community. Like watching rain drops on a lake ripple and affect one another.
It’s brilliantly curated and annotated, pointing out the key subtleties that advance the boundaries.

Martti Kuoppa:
I think Flatmattersonline.com is giving a great platform for riders worldwide to present their skills to nearly everyone who rides flatland and has an internet connection. I remember the era in flatland before the internet videos revolution, when there wasn´t too much progression going on and somehow that left me with a feeling that riders aren´t too motivated to learn new stuff. Today, many years later I see the scene completely with different eyes and I see many new names in the game with really good sense of originality involved.
I´m from the era where we used to come up with new tricks to almost every contest we went to, I mean that was the thing: ”I got to come up with some new tricks for the jam sessions that are going on at the comps”. So, I see that mentality going on in the internet videos which is great for flatland and flatmatters has had a very strong impact on it. 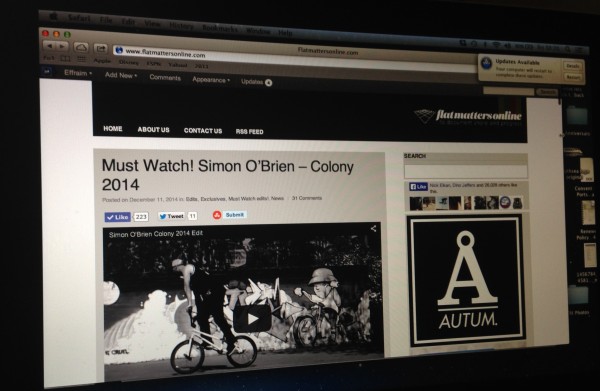 James White:
Mrs White constantly tells me I take her for granted, I do! plain and simple, I have no idea how the washing machine works, I rarely get the hoover out, and don’t even know where the iron is kept, as I type she’s franticly running about clearing up my crap, and for what, a nice bunch of flowers once in blue moon? (i am a modern man after all) but there is one thing I take for granted more, and thats ‘Flatmatters’! Effraim’s unprecedented dedication gets abused on a daily (sometimes hourly) basis with not even a thank you.

I’ve actually been asked to write something about the influence of flatmatters over it’s six year period. Well.. I could easily witter on about how’s it become every riders goal to get their edit on posted on Flatmatters and the ‘must watch’ edit becoming the ultimate aim pushing the boundaries beyond belief blah blah blah. But that just doesn’t go deep enough. Flatmatters was established at a point when the BMX world disowned flatland, no longer were we allowed to adorn the pages of bmx literature along side our ‘far cooler’ street brothers! No longer were we competing at the same events! Pushed aside like an embarrassing relative, Effraim stood up and said ‘We ain’t going out like this’! (I think Public Enemy said something similar) ‘we’ve got fight for our right’ (beastie boys)… and ‘Flatmatters’ was born.

It’s hard to say whether Flatland would have just withered away without Effraim’s dedication, but what it has given Flatland, is a good Home for us all to grow… and grow we have!

Effraim Catlow, heres a big bunch of flowers from us all..

Stephan Mulder:
I see FM as having a huge impact on FLAT world wide over the last year. Seems to be a great platform for motivating the sport, also for upcoming riders to get exposure and veterans to show case what their up to. All contributing to the progression of our sport.

John Yull:
As flatmatters comes up on 6 years it reminds me that I’m also coming up on 6 years of riding after 15 years away from flatland. Effraim and flatmatters have been such a great source of daily support. I can’t imagine flatland without my daily dose of Flatmatters! Thanks for doing what you do E and all the support you give me and all of flatland…. 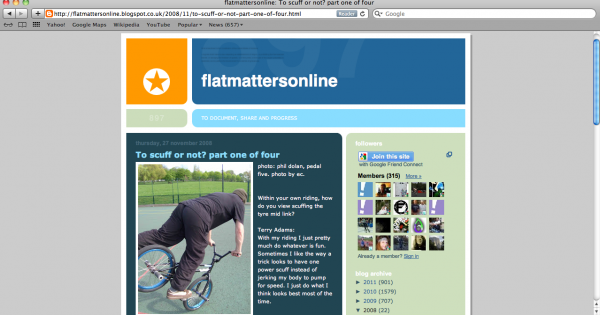 Anyone remember when Flatmatters was blogspot site?

Thomas Noyer:
If I remember well, Flatmatters web site was born few times after the disappearance of the flat in xgames. Depsite of that, and as his name indicated it (flat-matters), create the website meant that Flatland counts and continue to count in bmx scene worldwide. First kind of influence I hink flatmatters has had, at least in the whole bmx scene, was to give a legitimacy and a visibility to flatland (as Bmxunion website which is use to repost the flatmatters post…).
For Flatland in particular, I think Flatmatters is a “shop window” of flaltand today: all styles of riding, filming, budget, level of riding and caterories you created give a kind of referencing. How many riders discovered to us thanks to Flatmatters? How many new tricks have we seen for the first time on the web site? So, I think the mains influence Flatmatters has had are in two main ways:
-first is to push the progression of riders who aren’t still able to create their own tricks: they can watch how the others do their thing and they try, learn and progress
-the second one is a consequence of the first, Flatmatters push the originality of riding: given that to create it’s to make what was never made or seen, and that Flatmatters is a shop window of all the stuff already created and pulled, Flatmatters is at the same time the way, the motivation to be original (in reaction to the stuff which exist and posted on the site in order to find other tricks, other style) and the objective (must watch label often means “original edit” or edit with “unseen stuff”).
Thanks for all the information and motivation Flatmatters give us daily!

Todd Carter:
I believe that in 6 years, flatmatters has really united the flatland scene across the world. I like to think it has become the new “morning paper” to the flatland community.

I also really like the way flatmatters celebrates our diverse community. On the same day, I can watch a pro rider celebrate the unveiling of a brand new trick, all the while scrolling down to watch a beginner share the same enthusiasm for his or her newest trick. I think flatmatters has created a culture that can celebrate both achievements at the same time. This fosters health and forward thinking. Thank you flatmatters! Here’s to at least 60 more. 🙂

Pat Schoolen:
Flatmatters is one of my first clicks each morning. The edits and news shared on Flatmatters makes it an important part of the flatland community. I love how this site and Effraim bring riders from all over the world together every day and inspire progress from everyone.

Pete Hollinger:
While chatting with Effraim a few nights ago, he mentioned that Flatmatters was almost six years old. Initially I couldn’t believe it had been around so long, but the more I thought about it the more I struggled to remember how things were before it existed.
Flatmatters provides a lot for the flatland community but there’s one thing in particular that stands out for me.
Almost every week alongside videos from the big names there is someone new and previously unheard of killing it on the Flatmatters homepage. Riders of all ages and abilities, from every corner of the globe have somewhere their videos can be featured and their riding appreciated by other riders.
What could be more motivating for a young flatlander than to have their clips posted next to the latest video from Martti Kuoppa or Viki Gomez? It’s the modern day equivalent of having a photo featured in a magazine.
The internet has changed flatland forever, Flatmatters has harnessed the positives and helped push a new generation of riders to take flatland to the next level. Document, share, progress.

Viki Gomez:
I think the influence of Flatmatters had made Flatland united in a daily web where we all riders go everytime we want to see what s happening. Besides the “Must Watch” became a motivation to push harder and harder and get new tricks to have a “Must Watch”. Nowadays it s getting harder than ever and I like that challenge! I think Effraim has done an epic job and with out Flatmatters I dont know where Flatland would be now. Thank you for all these years and congratulation on this 6th anniversary! Keep it up!