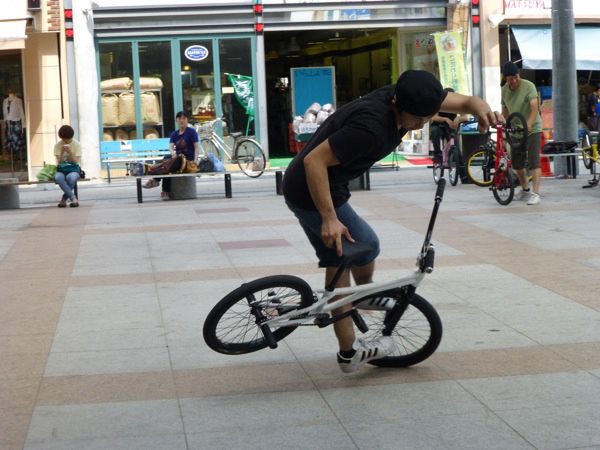 Style. Substance. Two words I think of when I think of Keisuke Tanagawa. Over the past year or so, Keisuke’s one clip videos and edits have really stood out to me, and he quickly became one of my favourite riders. This man is destined for great things if he wants it! I was curious to know more about him, putting this interview together was not an easy task. At which point I must thanks Gunter Mats for helping translate my words to Keisuke, and then translating his answers for you all to read. I hope you learn something you didn’t know about one of the most stylish riders on the planet.

Firstly, tell us all about yourself please! Where are you from? How long riding? How old are you?
I’m from Oita, Japan, which is in the countryside in Kyushu island. I’ve been riding for 11 years, since I was 15. I was born in 1986, and I am 26 years old.

What got you into flatland riding?
When I was 15 years old, I read a skateboard magazine, “Ollie” and I fell in love with BMX. At that time, Ollie has a how-to BMX column every month, and I saw Enoyoung on it. I think that he did a how-to junkyard and hitchhiker. I was so amazed like “It’s impossible!!” and enthralled by BMX. A bike which I bought first by my allowance was Opera by York Fellow. After I rode it for about 3 months, I noticed that the pedal rotated during a megaspin. So I changed my bike to Flower with a freecoaster.

How is your local riding scene? Many people to ride with?
My local scene is not so big. I always ride with about 3 riders.  About 15 riders are at my local. However, they ride not for contest such as KOG but for fun. I ride at the place with a roof which is often shown on my videos, 4 days per week, 2-3 hours per day.

When you started riding, did you go immediately into the japanese contest scene, or was a lil’ time riding on your own getting ready before it?
I begun to become conscious of contests after some years since I started BMX. I went to KOG in Fukushikma alone, and was really surprised and shocked beyond words for seeing Martti, Viki, Alex, who came to Japan at that time and Moto, who is same age as me.  Over 100 riders were at the contest, but I knew none of them and everyone has great skills. I felt like getting out from the contest because of anxiety and my powerlessness. I started to practice hard since it, and I got second place of expert class at the next KOG in Kobe. Then, I seriously got to aim to become a KOG prorider. 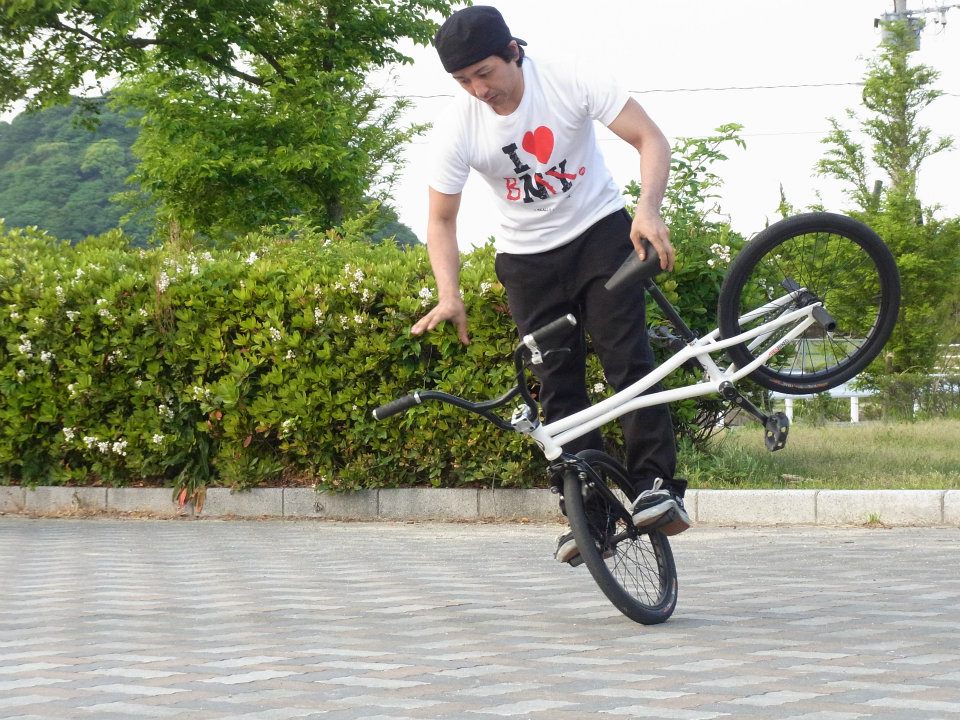 Tell me why you think flatland is so big in japan?
I’m sure that the following riders have founded Japanese BMX scene.  York Uno/Takashi Ito/Hiroya Morisaki/Roiji Yamamoto/Akira Okamura/KotaroTanaka…
I think, however, that more riders also have. When I started BMX, they were outstanding and big goals; ”I want to become like them,” or “I want to ride better than them. “ Since then the generation changed and the scene becomes one of now. Japanese riders has played active parts in overseas before I started BMX! Moreover, they fought in overseas with ARESBYKES on their back and  foreign skilled riders also rode ARESBYKES… They are real “samurai” (haha) It’s quite natural that the next generation became enthusiastic!! We are really blessed.

Growing up who were you inspired by, and who are you inspired by these days as a pro rider?
I was influenced by Mr. Phil Dran. (Dolan?)  I was shocked to see the video that he scuffed with both feet and controlled his bike effortlessly.
Recently I was inspired by KGB. I got big influence by their mission to pursue hard tricks thoroughly.
Especially, their switches with brakes are the best now. I don’t copy them, but pursue other possibility every day. Switches with brakes are of great depth…

Do you work for a living?
Yes.  I work normally.

For me you have one the best styles in flatland. Are you concerned with style or is it something that came to you naturally?
I always ride with ideas.  I do different combos, most of which are ad-lib every day.  Because I hate to practice same combos again and again, I practice combos made by my feelings of the days.
I make one flow by combining short combos like puzzle, so I don’t remember ones made in the day before. Therefore, all combos in the videos I uploaded are different.
In other words, I am not a rider for contests (haha).  I think only I decide combos for the contest in the practice time on KOG… This is freestyle in a sense, for which I feel more fascination than to make a solid combos. I understand that I can’t win the contest this way… Is this my style ??? 🙂

What for you is an ideal combo?
I call it “compressed trick”. It means tricks which consist of many tricks without interval between a trick and a trick.
It doesn’t mean single barflip to glide but shifting another trick just after barflip to glide…. it’s difficult to express…
Do you remember the movie titled “PANDORA”? I did five switches in the combo in it.  I did not pump between each trick and trick and link them up only by velocity of start and brakes.
This is my ideal trick. Since it consists of various tricks, it is of big difficulty and becoming different one from trend style.Therefore, condition of the surface, mentality and bike settings are the key. I just call it “compressed trick” at will.  I’m glad if you understand what I mean. If you watch my movie after understanding what I said, the tricks give you different meanings and become more interesting. I’m sure that compressed tricks are overwhelmingly difficult with both high risk and high return. I have to make them easy in order to pull them out at contests.

Tell me about your bike set up? Always front brake on the left?
Yes, I put my brake on the left.  In my opinion, it is suitable for hard tricks. With a brake on the right, it is easy to make flipping switches from steamroller but difficult to make ones to hitchhiker by braking. Many riders put brakes on the right when bikes were getting lighter and lighter. After it they put brakes off. Now, only few riders put brakes on the left with bikes of 8-9kg, so (I think) there are big fields to explore. Adding above, I can’t think I make tricks harder than Vikki’s.(haha)
I’m very serious about the settings. Since I’m under 170cm tall like normal Japanese, I need severe settings  on many aspects. In such a situation, I met “GARUDA” by ARESBIKES, which supports me mainly.  GARUDA was made with the concept [for Japanese riders to battle in the world] by Hiroya Morizaki, and was what I want. Now I’m riding a prototype called “GARUDA-T”.  It is a sample frame with a shorter chainstay, which is not on sale. Street frames are popular now, but I’m sure that frames with bent tubes in the coming flatland scene. The lengths of foot are of course different between us and tall riders.  Small riders feel the toptubes too high, while big riders can easily step them over. I’m sure that frames with bent tubes will be the center of attention in the future.

Any plans to travel outside of japan?
I have no plan, but I will come to foreign contests for sure!!

Are you excited about the Red Bull Circle of Balance coming back to japan again?
Yes, I’m eager for circle of balance to take place in Japan. Japanese flatland scene is progressing. Unknown young riders are appearing and pro riders are also evolving not  to be beaten by them. I think that Japan will play the key role in the coming flatland scene. 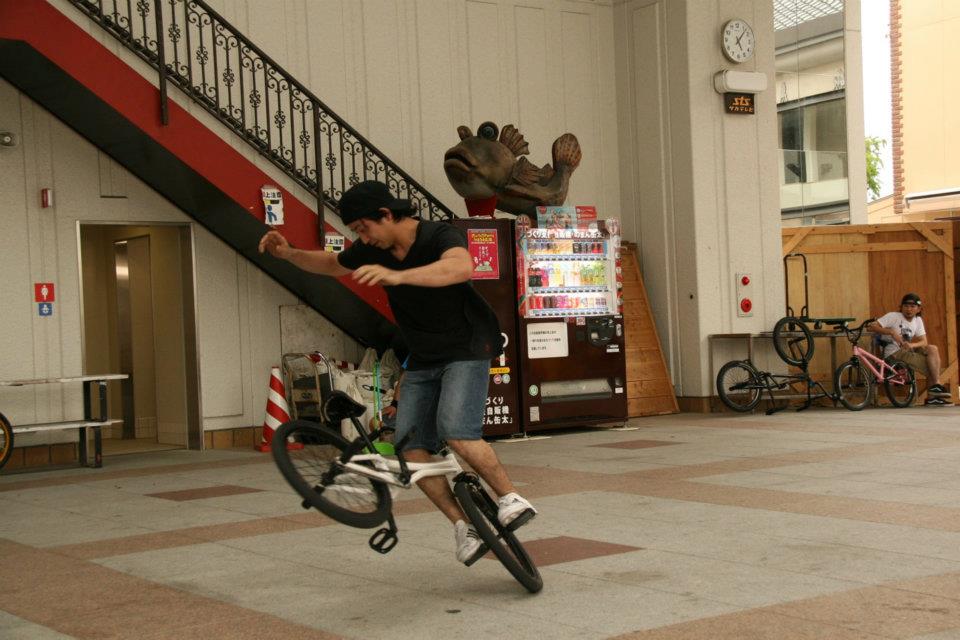 If you could talk to other countries about how to make flatland grow in their country what would your advice be?
We can watch movies of contests and tricks just after on YouTube and so on. It’s very useful. This is very good, but on the other hand, many riders don’t dare to participate in contests because they can understand how skilled they are. Now we can make friends without seeing each other on Facebook. I want many riders to know that they can feel much more things at real contests than from the movies. It is important, and I have to say it to myself, to come to many contests.

Do you have any advice for beginner flatland riders reading this?
Flatland has infinite possibility. I’m not very good at sports. I don’t think that I have more stamina and muscle than others. Nevertheless, I have continued to practice to control bike as I want. Be delighted if you make tricks. Shout out if you can’t ride well. Always spend time with BMX head-on. I can do, so you can. Enjoy to your heart’s content!!

Any final words to close the interview?
First of all, thank you for featuring me, Effraim.  And I also appreciate you posting my videos.
Anyway, I love BMX and have ridden it for ten years.  I work normally now and ride for 2-3 hours after my work.
I don’t ride for contests, but concentrate only on make my skill up after I left KOG.  I don’t mean this is the goal but will come back to the contest scene.  I want to go abroad, for example, to US, besides domestic.
I want to ride with more riders from overseas.
I will participate in KOG again.  I am I thankful to KOG.  It is always my goal.

Thank you Keisuke! Its been a pleasure catching up with you!