The Final Flatland Fracas happened on Sunday August 2nd in East Bridgewater, MA USA. It was an amazing day, bringing a fitting end to this fun grassroots contest series. 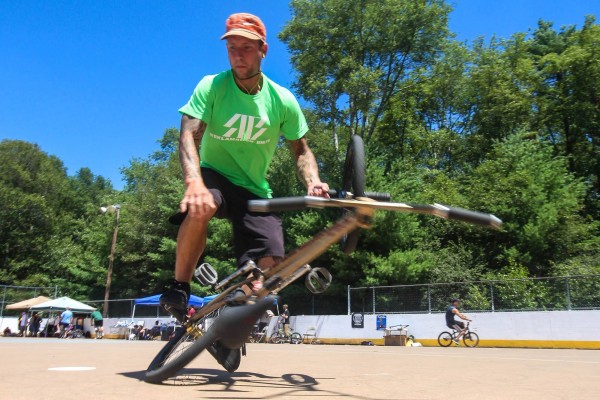 Killer shot of Jason Plourde You really do have to witness his riding live to appreciate!

We started with a performance of the Star Spangled Banner by Kurt Ballou. Kurt is a busy performer and studio engineer, but also a lifetime BMX fan. We tried to set this up for a few years but this time the circumstances lined up and we made it happen! He shredded it a la Hendrix for us, it was great to see! 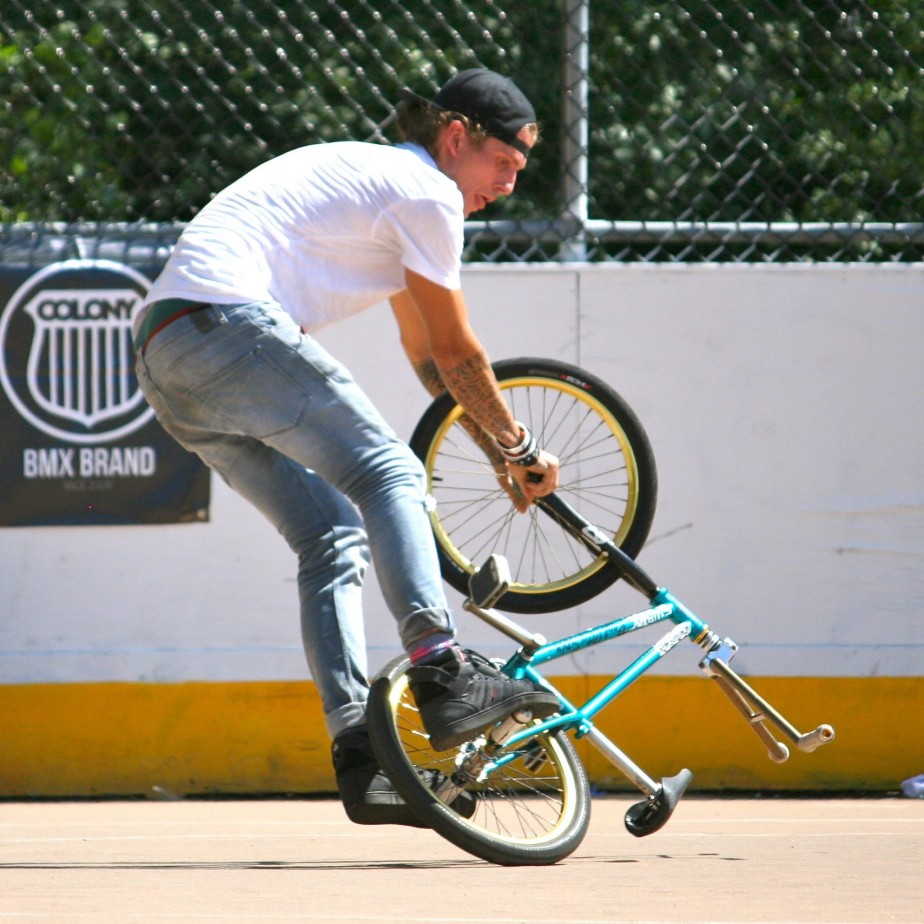 Dub in the mix, working the two footed ice cream turbines on his way to first place.

The timing of previous Fracases was a little slacking, so this time we planned the entire day down to the minute and we stuck with it, all day. Instead of waiting until the end for giveaways and awards, we did several prize tosses throughout the day and awarded trophies immediately after each class, it worked out great and kept the “stoke level” high! 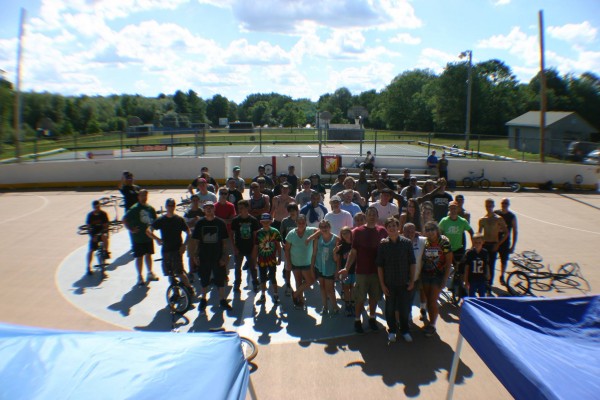 The Pretty Good class was won by Ian Hicks, son of longtime rider Jesse Hicks. Stephen Toomey joined us again for 2nd place and improved over last year by quite a bit! Luke Hammerquist is an amazing 9-year old ramp shredder who impressed us with manual hops, peg wheelies and controlled rollback skills that not many adults could match.

Trent Chavez won a special prize pack in the Bizhouse RockWalk challenge with 6 continuous. Everybody had their own technique, plus I hadn’t seen anybody do a rockwalk in a while!

Real Good was our largest class and was taken by Freddy Brown. Time machines, rolling backyards, bar rides…Freddy was riding very smooth, although he chalked it up to luck! 2nd place went to Darryl Johnson of NY…he had a fun mid-school style and the crowd loved it. Quest BMX ceo Danny Sirkin flew out from Ohio and took 3rd place with 2 solid runs! 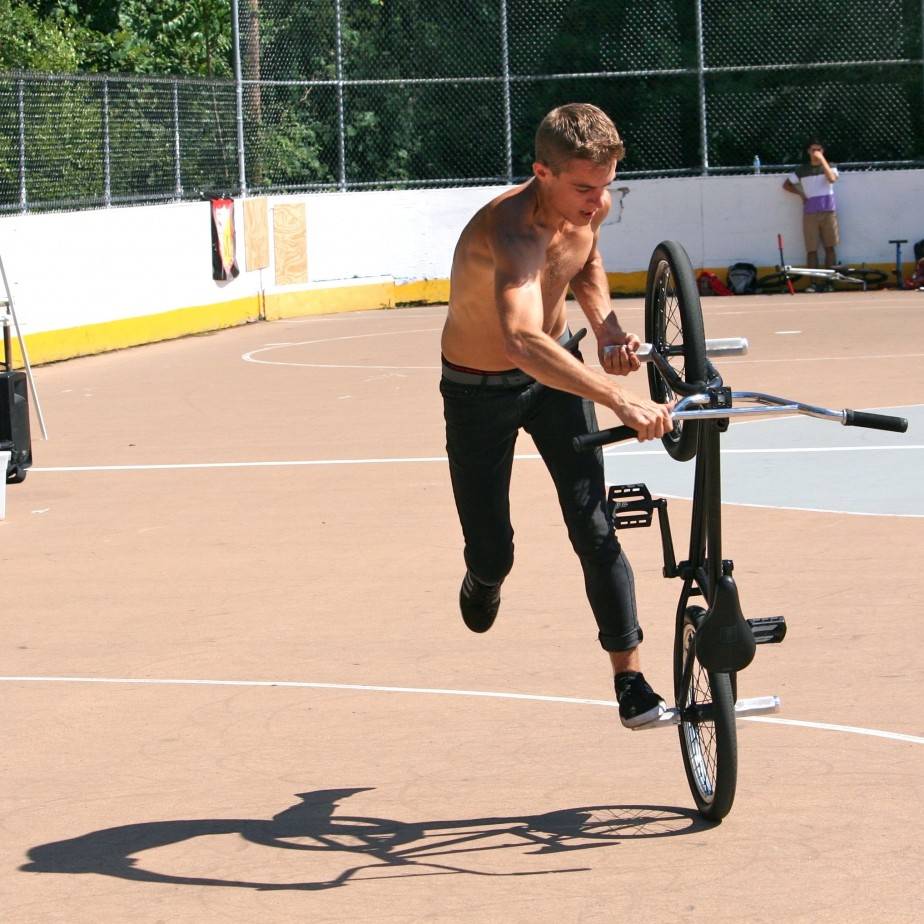 Mannie Nogueira made the move up to the Bad Ass class for Fracas. Love this shot of Mannie exiting his xft ice cream line!

We all chipped in for lunch (25 Pizzas thanks to Roy DeGuzman, Dave Alden and Chris Hanson) and resumed with the Bad Ass group. Jean William aka DUB put in his own music after my 80’s mix CD got a little stale..it really changed the mood and made for some serious competition.

The Bad Ass class brought the trick difficulty and energy it is known for, and with many different styles! Steve Jordan re-emerged with his fast rear wheel spinning. Gabe Kadmiri now has 3 pegs up from his usual 2, and was busting 180 whoppers, his solid tomahawk bar flips, and more. Jim Cavanaugh nailed the first combos in each of his runs and made way for the Canadian invasion of Dub and Jason Plourde. These guys are doing tricks NOBODY else is, and their consistency was unmatched! Dub took the win with his long combos containing so many hard tricks I lost count. Jason took 2nd with his whirlwind stubble ducks in mid-combo, and those fast brakeless decades that never disappoint. Massachusetts was redeemed by Luke Malone, who brought the controlled circular whiplash/hang 5/messiah/cliff combos we love. 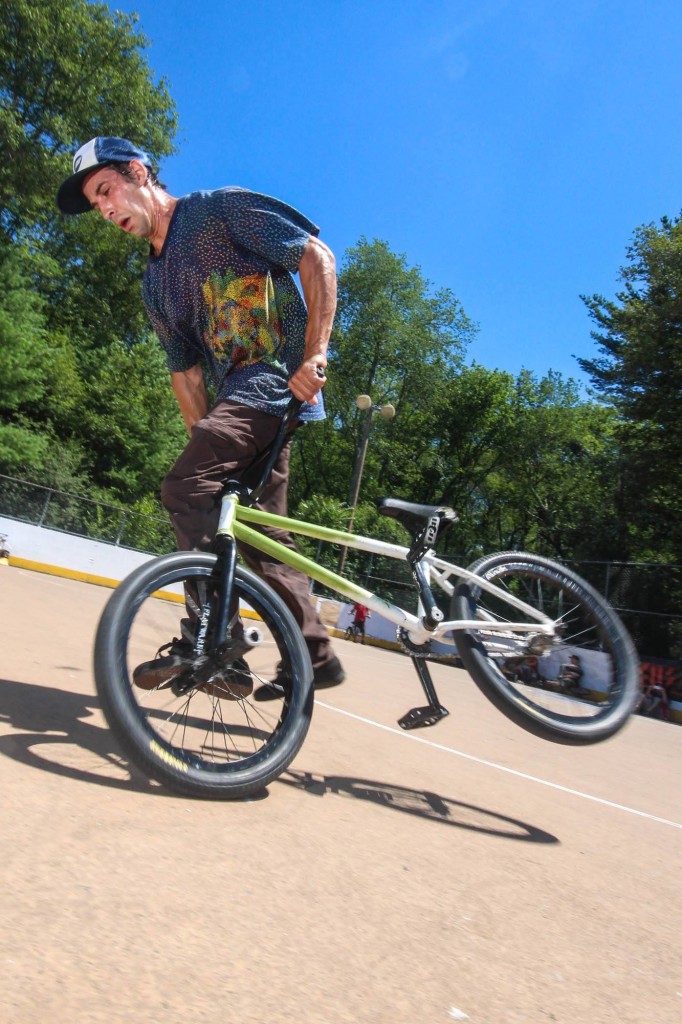 After the raffle proceeds and donations were added up, we had $225 for the winner-take-all Best Trick jam. We gave each rider a limit of 5 attempts (or more if the crowd demanded it!) and the judges would pick the best of successful tricks. Jason Plourde came out and destroyed it first try! He dropped his upside down time machine/stubble-duck insanity in full control and power!! After a few tries, Dub hit his two-footed forward deathtruck into the forklifter…a trick that I never thought was possible. I’m sure I’m not alone in being so excited to see that in person!! Gabe Kadmiri hit a bar spin hop to manual, somehow yanking it up into a pedal time machine. It was all so crazy, safe to say the Stoke level remained high to the end!!! 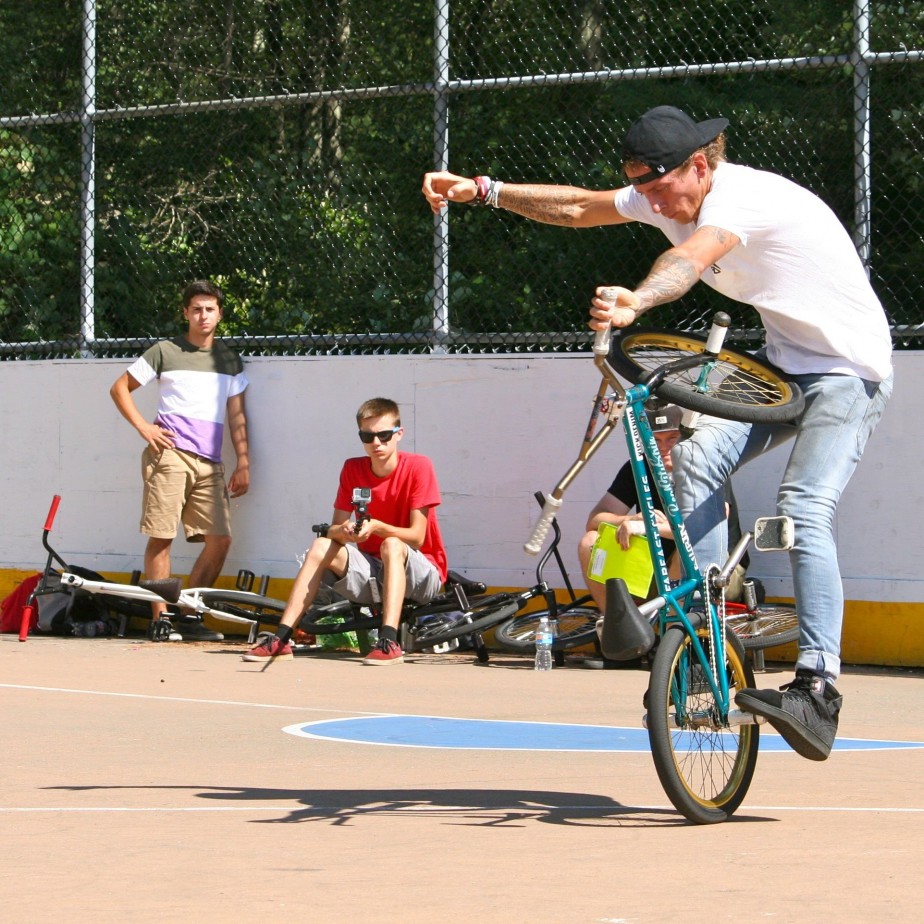 Dub on fire, taking the win at the Final Flatland Fracas contest, here with his signature switch-b undertaker!

Jason went home with the well-deserved cash and a shower of Silly-String, capping off a great day.

I started the Fracas in 2010 with a few small goals. Over the years it grew exponentially and smashed every one of them. There is no way (and not enough space) to thank all the friends, family, riders from all over, and sponsors that contributed and made it happen over the years. Flatland BMX is alive and well in New England, and we were glad to prove it over and over! 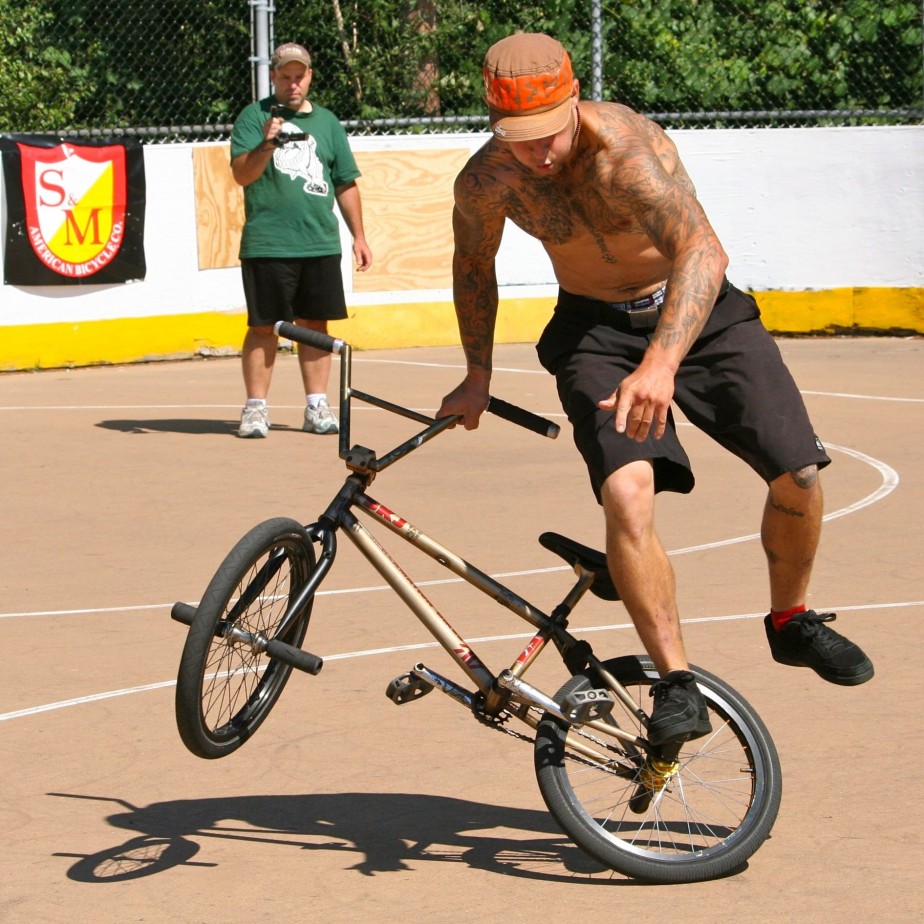 Jason Plourde hit his transformer line first try to take the win in the Best Trick and take the cash back to Canada, next up Real City Spin!