August is often the busiest month of the year on the site, and it certainly got started with a bang on August 1st! The man of the moment, Viki Gomez fresh back from the 2016 World Circuit title in Brazil goes back to the core day to day sessions at his home spot in Luxembourg and just like the CORE Part 1, this delivers at the highest level!

Highlights for me:
– The opening rolling dump truck pivot backwards xft ice cream pivot opposite side two footed dump truck pivot xft ice cream line is just beautiful and took me back to the riding of Dan Rigby, amazing!
– X bar steam kickflip regular bar halfpacker pivot opposite xft hitch xft halfhiker body varial to halfpacker at 00:39!
– I know it’s not new, but the hang ten pressure jump steam Viki does at 1:03 is timeless, execution is also on point!
– Backwards crackpacker in circles carved back to forwards crackpacker steam kick flip crackpacker, the technicality and sheer variety of moves Viki has is just incredible! This is years and years of crafting to get to this level, I could go on and on, but I’ll leave it here.

Tuner Evolution 2016 was the 10 year anniversary of the car show in Philadelphia, PA. Jean-William Prevost, aka Dub come through from Montreal, Canada and Ahmed Johnson came all the way from LA to put on a show. Check out some of the amazing back wheel riding that went down. August started off hot, quite literally!

It is always a good day when Jimalog drops a new edit, August 7th was one of those days. With Benjamin Hudson in Tokyo, Japan recently for the G Shock contest, it’s as good of an excuse for a jam at the Matsudo Mori No Hall 21 riding spot in Chiba. Combine one of the best scenes, and Jimalog and your onto a winner!
Watch the whole edit and enjoy the vibe with the riders feeding off each other, featuring amazing and diverse riding from Benjamin Hudson, Masashi Itani, Naoki Watanabe,Yu Shoji, Shuichi Osada, Akihiko Takahashi, Tomohiro”Penipee” Katayama, Koh Yoshida, Takuji Kasahara, Kazuma Nakajima, Moto Sasaki, Takumi Matsumoto and Yuki Itoh. Good times in Chiba!

August 9th, One of the most amazing tricks of the year is without a doubt Sean Fontenot’s xft half cab rolaid, hit play to watch Sean locking the move in over and over at the Globe spot in Long Beach. Sean sadly blew his knee out on the attempt around the 00:38, this really sucks! Get well soon Sean! 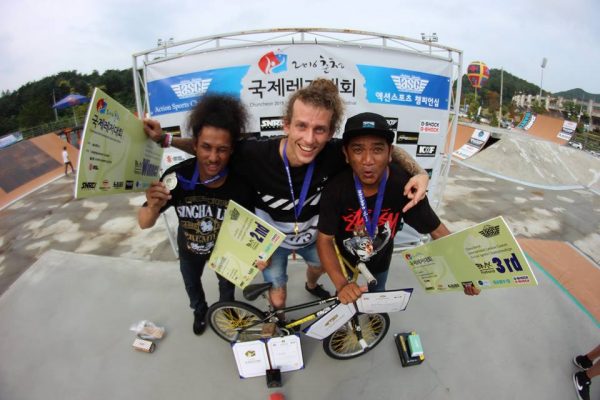 August 14th, Congratulations to Jean William Prevost who just won the Chuncheon World Leisure Action Sports Championships in South Korea, followed on the podium by Toon Pakphum, and Taslem Raziff. Here’s what Dub had to say:
“I am so grateful to have had this opportunity to come to Korea and ride with all these amazing riders, love these guys Toon Pakphum and Taslem Raziff I am sharing the podium with at Chuncheon World Leisure Action Sports Championships, what a great event! Super stoked on flawless run on finals even if I didn’t get to do my second run because of rain!!! This was hands down the best contest floor ever, spacious, grippy and especially and ultimately FLAT and consistent!!! Really hot though. Real City Spin is next wooosh!!!”

On the same day, Amazing leftovers edit from Jeff Scheer’s 43-30 edit last night, here Jeff gives a lil’ info in the extras edit, plus you can check the 43-30 edit below also for reference. So good!
“Here’s some extra clips that I did not use in my previous 43-30 Video. All filming was from 2015. Some of it shows tricks leading up to what I included in 43-30, such as learning backwards stem boomerangs regular and opposite in order to hit the backwards stem boom rebate included in 43-40. Hope you enjoy! And if you have not seen 43-30, check it out…” 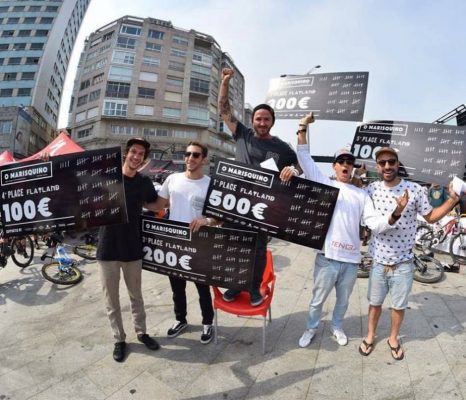 And we continue on the 14th, Congratulations to Alex Jumelin who took the win at the annual Omarisquino contest in Vigo, Spain, Alex was followed on the podium by Viki Gomez and Miguel Tardio. A lil’ bit of a surprise to see Matthias Dandois outside of the podium positions.

On the 17th, Nowadays with so much good riding available almost daily, tricks get forgotten really fast! With that said, one of the best tricks so far of the year is without a no doubt John Yull’s no handed brakeless backwards decade from his second round Master of Creativity contest entry. Incredible!

Also on the 17th a banger from Matthias Dandois!
2016 has already been an amazing year for flatland, with some strong battles going down to take the win at each big contest! In my mind, this year Matthias Dandois and Viki Gomez in particular have been pushing the level up and up in contest riding and also in video parts.
Today we have something special out of Matthias Dandois, away from the contest light and pressure you get to see what he’s working on. And as always, Matthias is on point with the edit, rad track, great locations, and the variety of moves front and back wheel is worth highlighting.
There’s a lot to list here, hence the Must Watch:
-Xft steam step through to xft crack pivot hang ten to halfpacker backwards spinning halfpacker out at 00:59.
– My personal favourite clip is the Two footed x handed steam pivot whip to halfpacker line at 1:52.
-Backwards spinning opposite side ice cream pivot to quick two footed backyard pivot out with no delay at 2:31.
-Matthias signature no handed steam bar flip one foot crack boomerang to no handed halfpacker bar scoot entry out at 2:59.
-Backwards opposite spinning ice cream undertaker regular side turbine to backwards spinning pedal time machine at 3:20.
-Carved backwards manual g turn to hang 5 to backwards hang 5 boomerang line at 3:52.
– Two footed front yard turbine into double backwards boomerang to crackpacker is ridiculous at 4:18 and the ender is fire too!
Thank you Matthias for this one!

Things calmed down for a few days after the Matthias edit, on the 21st we got back rolling again. Like I said just a few days ago when Matthias Dandois dropped his amazing “Flat side of things 3” edit, he and Viki Gomez have been going back and forth all year. Great to see today Viki Gomez’s instagram compilation from 2016 so far, the multiple bike flips Viki is now exploring seems like a new direction that I can see him pushing for years to come!

And a day later, another Viki Gomez video and another Must watch! I have been waiting for something like this for a long time, something that digs inside what is flatland, and what can it bring to the individual. Bobby Carter explains a little more, grab a cuppa and enjoy this amazing project!
“After Viki won 2015 BFWC Championship, Viki was asked to make a film with a message for the new generation of riders. The film was shown at the Tokyo Bicycle Film Festival. We only had about 3 weeks to make this film. Martti Kuoppa, Simon O’Brien, Chase Gouin, Chad Degroot, and Scott Powell all scrambled were able to submit footage with their perspectives on flatland. Besides the time crunch, the most challenging and most fun part was digging through the archives of flatland history to pull out some of the best riding put on video from Diversion, Intrikat, Baco, and others from the 1990s to present day. I hope you enjoy the story and the many perspectives on this thing we all love, called flatland!”

On August 24th, Still catching up on contest news and edits across the globe after a busy weekend organising the annual King of Southsea contest. Congratulations to Alex Jumelin who took the win, followed by Dominik Nekolny and Kevin Nikulski. Check out this rad highlights edit Martin over at Global flat put together.

So many good edits recently, as you would expect with summer in full swing. It is definitely a good day when a fresh Chad Johnston edit drops. Chad helped pioneer the pegless riding style and continues to truly walk his own path.

Some of my personal highlights:
-Opening stem mccircle to scarlo tomahawk whip line at 00:04.
-Bar flip to pedal 5 in circle foot jam bar scoot line out at 00:20
– Mixing the old school and new school with a Quick bar spin pedal 5 to cowboy out at 00:40.
-Stem karl to double foot karl full bar flip out on bb/chainring at 1:25.
– The bar flip pedal 5 turbine back forward without scuffing is amazing at 3:53!
I could keep going on, as with someone who truly carves his own path, everything is kind of highlight. Big respect to Mr Intrikat himself, Chad Johnston who has given so much back to our sport/artform with his videos and his own personal riding. Hit play, get motivated and get out there at your riding spot. Stoked!
* Keep an eye out for Chad’s S&M Video part due out shortly. 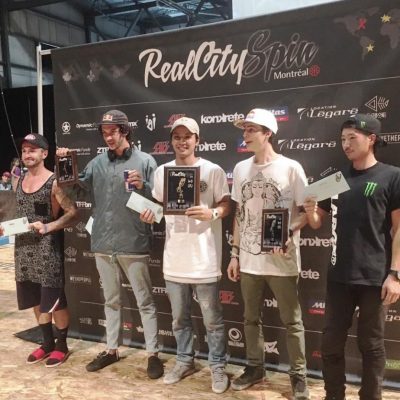 On August 29th, Congratulations to Yohei Uchino who held onto the first place qualifying spot, and took the win at Round 4 of of the 2016 World Circuit at Real City Spin in Montreal, Canada. Ucchie was followed on the podium by Benjamin Hudson and Matthias Dandois, with Moto Sasaki and Alex Jumelin rounding out the top 5.