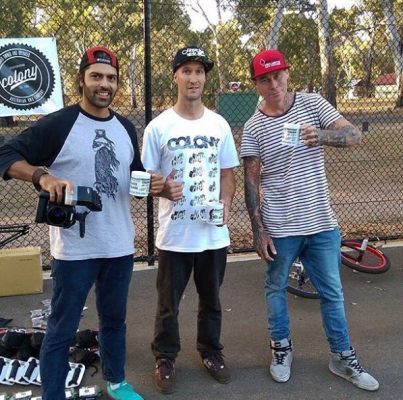 On May 2nd we posted the news, Simon O’Brien won Round 1 of the Down Underground series in Belair National Park, Adelaide Australia, followed on the podium by Paul Chamberlain and Lee Kirkman. Great to the contest scene still flowing in Australia.

A day later, “Dustyn Alt is one of the nicest guys in the flatland scene for sure, but by the look of this short new edit Dustyn is getting nasty in the riding sense! The pedal backwards spinning straddle time machine out of a backwards spinning lawnmower flip to ice cream is amazing! Definitely worth a watch, and congratulations Dustyn nailing this one!”

May 4th was a good day! Joris Bretagnolles has just been added to the advanced pivotry IGI team, congratulations JB! Glad to see the underrated Joris Bretganolles getting some love from IGI. Peep this nice Welcome edit, the 360 varial to two footed pedal caboose at 1:26 is fire! Enjoy this treat! 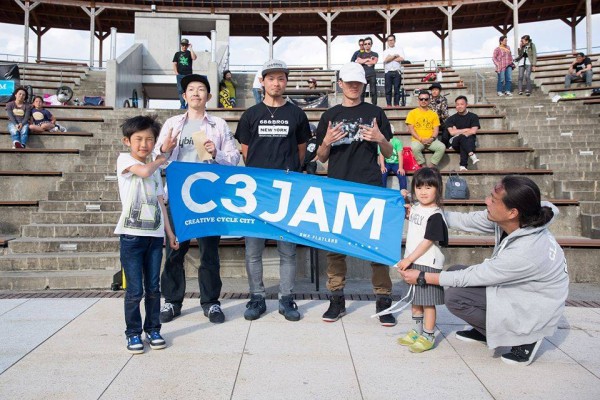 The 3rd and final part of the Ride On BMX interview with James White dropped again on May 4th, told you it was good day!
This is pure gold as James talks about how he fits riding in with family life and what he’s had to do to stay fit enough to ride at the highest level in his 40’s.
He also talks about his love for collecting Old school BMX and riding for S&M. Grab a cuppa and enjoy this one! Special thanks to Neil Waddington for dropping these amazing interviews!

By the fifth day of the month, already we had two must watch edits. This one was somewhat of a different “Must Watch” than I normally do as this video for Colony BMX dropped about a month ago on Facebook and I wasn’t able to post it on the site. So it doesn’t have the same impact as a video you haven’t already seen but equally there is so much good stuff within this edit I had to give it the “Must watch” tag. And is also even more amazing when you consider his health problems, so good to see Simon O’Brien back and firing!

Standouts for me are:
-the quick blender out opposite side I’ve been waiting to see for years at 1:16.
-forward karl jump to backwards halfpacker turbine forwards line at 2:10.
– Fire hydrant decade mega spin to Edgar P time machine line at 2:50.

Round 1 of the GroundControlUk series was going down that weekend in Manchester. Hit play for an awesome trailer, with Phil Dolan who invented the brakeless nose manual 15 years ago. Just look at the technique, amazing!

May 6th saw the first full team edit of the year, from Quest BMX!

“A quest can be defined as pursuing something difficult to attain. That joy you feel when you accomplish a long sought after goal makes the years, months, weeks, and days of hard work all worth it. As riders, this is why we ENJOY IT.
Enjoy It. is a project that was meant to not only showcase the 2016 team but also have fun. Filmed throughout the beginning of 2016 in the USA, Canada and France. Each team rider pushed themselves to put something new on video.
We hope the video gets you motivated to ride every time you watch it. Above all, we hope you ENJOY IT.” 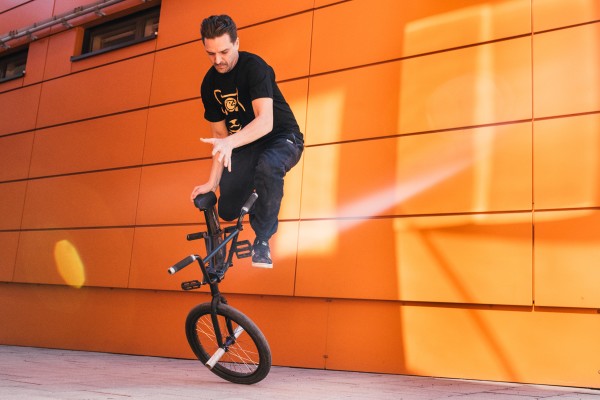 On the 7th some big news from the 2015 FM Rider of the Year, Martti Kuoppa!

“When I started Master Of Creativity I had no idea how popular it would get so fast. I received many entries and a lot of messages, where riders expressed their excitement about the format.
Which made me feel, that I truly want to give back something to the riders out there and the first idea was, that I am going to build a brand that will be the first sponsor of Master Of Creativity.
Soon after the idea of 7Grounds was born and here I am, launching my own brand, which will donate a portion of each sale for the Master Of Creativity competition (my dream is to run a video contest that has a prize money).”

I know that the world is packed with t-shirt brands but I also feel, that world is not full of t-shirt brands that really care about the lifestyle of Flatland BMX. Here it is.
I am keeping the selection to very limited, because that´s the way I do things. Each item purchased from my shop will be numbered by me and when the item is sold out, that´s it, it´s not available anymore.
www.7grounds.com
I have a team too, it will be me, Thomas Noyer and Peter Olsen.
Thank you for riding Flatland! Let´s keep the tradition alive!
Martti Kuoppa / 7Grounds 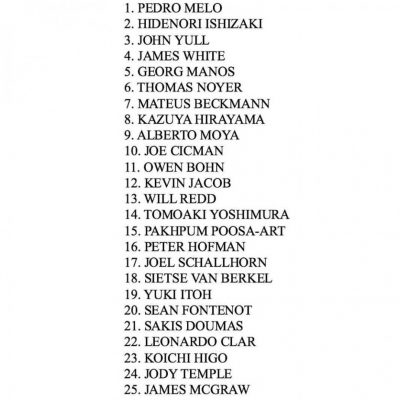 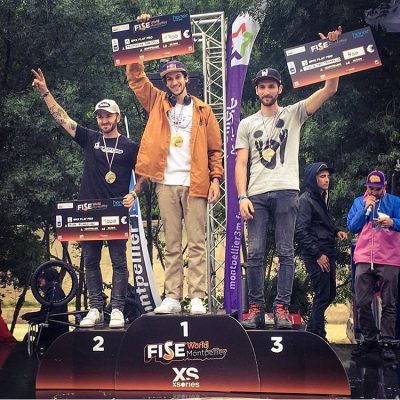 On May 8th, Matthias Dandois won the annual Fise World contest in Montpelier, France that weekend. The event didn’t quite go to plan as todays finals were rained out, so the result from qualification stood from Friday! Ideal birthday present for Matthias, followed on the podium by Alex Jumelin and Joris Bretganolles! 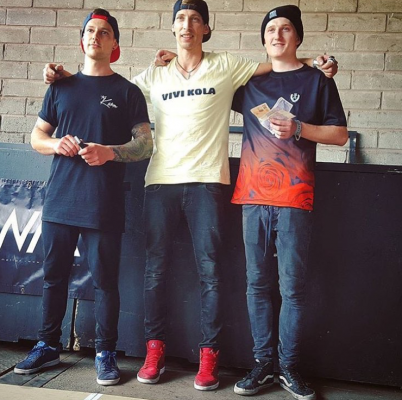 On the same weekend, Dan Hennig who made the trip to Manchester for the weekend for the Ground Control UK Round 1 and took home the win, followed on the podium by Keelan Phillips and Billy Whitfield.
In the AM class, Billy Whitfield took the win followed by Yinka Thomas and Mike P.

May 10th saw one of the best clips of the year get dropped and the 3rd Must Watch edit of the month. Dominik Nekolny does not play, incredible around the world skills mixed with two xft hitch pivot to backwards backpackers with the latter coming out opposite and back into around the world xft.

A day later, “Early in 2016, Sebastian Grubinger’s riding spot was shutdown due to construction work. A white wall was left with a small strip of asphalt left. Sebastian makes full use of tis small space, and as a result his back wheel riding has improved no end! Especially liked the xft ice cream walk around to two footed dump at 00:47, the backwards manual on the top tube at 00:58, and my favourite the ice cream walk around to backwards two footed backyard. Although it sucks of course that Sebastian lost his full riding spot, he’s made the best of a bad situation. I took a lot out of this, and perhaps you will to!”

May 11th was another good day for edits! It is always a treat to see Jody Temple ride, and thankfully Jody recovered from his back injury that plagued him for the last year or so. There aren’t too many riders riding two front brakes anymore, Jody works this to full advantage, Jody kills multiple hang five bar flip variations but perhaps my favourite was the opposite xft hang five bar flip to bars backwards hang five one handed whip out at 2:07! Well worth a rewatch for sure!

And it continued on the 11th, John Yull dropped an instagram edit and explained this one:
“At the end of last year I felt burn out. I took off a couple of months from my bike. I wasn’t motivated. I gradually started to ride again and post a few clips here and there this is a video of those clips so here’s my 2016 Instagram posts.”

We didn’t have to wait long for the next quality edit, on the 13th. A friday treat just in time for the weekend just arrived in my inbox from the underrated Masashi Itani!

Beautiful back wheel flow captured perfectly by mmfilms in the Tokyo seaside Toyosu area, loving the around the world line at 1:59! 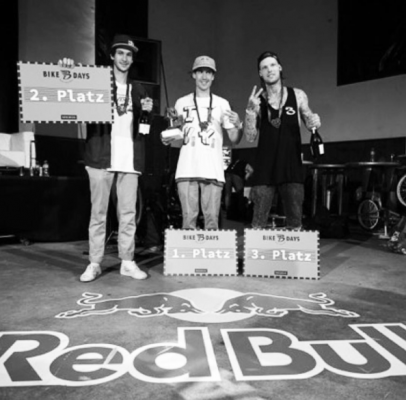 On May 22nd, Viki Gomez who took the win today at Bike Days – Round 1 of the 2016 World Circuit for the second year in a row, followed on the podium by Matthias Dandois and Dominik Nekolny. 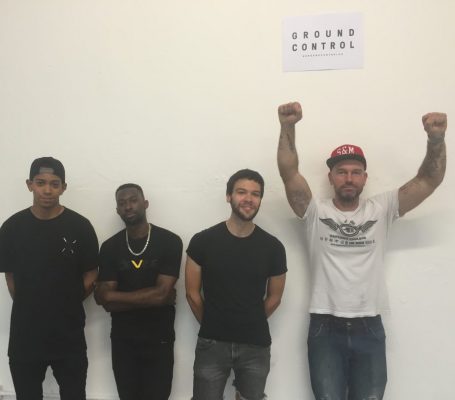 On the same weekend, James White took the win at Round 2 of the GroundControl UK series, but not without a battle with back wheel shredder, Andy Hale and Jason Forde who both putting solid runs!

On the 24th, edits started coming in from the Bike Days contest. Alberto Moya dropped this really nice edit of Benjamin Hudson, Yohei Uchino, and Dominik Nekolny warming up for the Bike Days finals this past weekend, three different styles. This is definitely worth a rewatch!

A day later, and we got to see Viki Gomez’s winning ride including the bonus best trick round first try that helped him seal the win in Switzerland.

Two days later, and the 4th Must watch edit of the month. In terms of the flatland/street crossover it’s of course debatable, but I would say no one right now is as progressive in that style of riding than this young prodigy from Brazil, Mateus Beckmann!

5:30 of fresh flat/skatepark footage that leaves you scratching your head, is there anything this young talent cannot do.
I’m already on the fourth watch before I posted this, some of the highlights so far include:
-180 hop backwards manual junkyard line at 00:26.
-The x-fted BB manual to decade out of the two footed backyard line at 1:36.
-The huge 5 off flat bank half cab whip out around 2:18.
-Inward direction half bar flip decade at 2:37
I could go on, definitely worth watching this young prodigy do his thing and kill it hard on all terrain. Motivational! 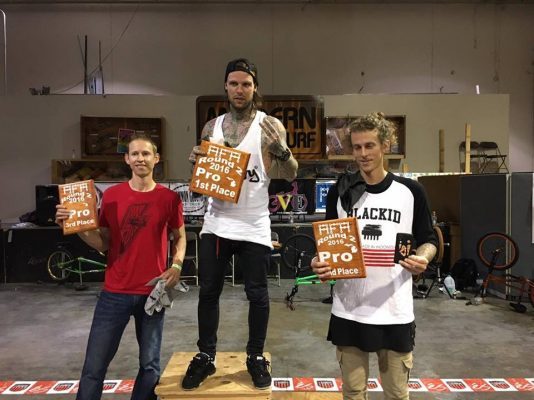 On May 28th, Dominik Nekolny took the win at Round 2 of the AFA series in Detroit, Michigan USA. Dom was followed on the podium by Jean William Prevost and Matt Wilhelm!